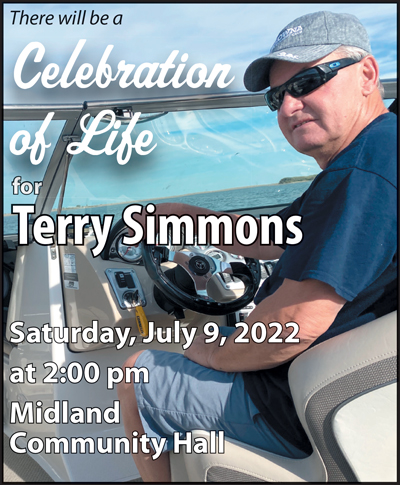 It is with heavy hearts we announce the sudden passing of Kenneth Terrance (Terry) John Simmons on May 4, 2022. Terry was born in Assiniboia, Saskatchewan
February 25,1958. He is survived by his partner Cheryl Hyland, Daughter Nicole (Nancy) Easton, Grandson Mackenzie, brothers Don (Cathy) Simmons, Brad (Dawn) Simmons, and sister Laurie (Kevin) Mitchell along with numerous nieces and nephews. Terry was predeceased by his parents Barbara Simmons, and
Kenneth Simmons. Terry worked on many farms throughout Saskatchewan during his early years, and finally settled in Drumheller, where he worked as an
instrument technician for Pronghorn, and Encana, and as a control room operator with Ember Resources for the past few years. Terry’s passion was golfing,
travelling, gardening, boating, fishing and being a Grandpa! Terry will be deeply missed by his close neighbors, family, co-workers, friends, and many others he met along the way.