Condolences to the family of Madelyn Sherman | DrumhellerMail
03052021Fri 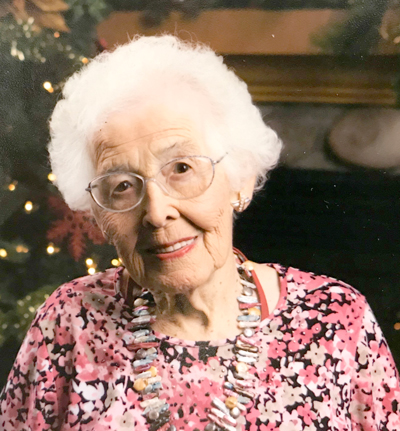 Madelyn Sherman, born November 7, 1924, in Chester Basin, Lunenburg County, Nova Scotia, to Lorenzo and Olla Joudrey, passed away peacefully at the Drumheller Health Centre on January 19, 2021. She was predeceased by her husband Ernie and eldest son Darrell. Madelyn grew up with five brothers (Maurice, Chuck, Harry, Burchell, and Glen) and one sister (Peg). She and Ernie met in Halifax while Ernie served on a Canadian Navy Corvette for the North Atlantic convoys during WWII. After the war, she returned with dad to Calgary, moving to Drumheller in 1950 where they raised their boys and operated an upholstery and furniture business until retirement in the late 1980s. She was an active member of Royal Purple, serving one term as District Governor, and often a special nana or bonus grandma to children of family and friends. Madelyn is survived by her son Brian (Judy) Sherman, adopted grandchildren Sandy (Michele) & James Brown, and great-grandchildren Amanda, Tyler, Matthew and Alexandra Brown, and numerous nieces and nephews who are spread out from British Columbia to Nova Scotia. Mom was a long-term resident of the Drumheller Sunshine and Hillview Lodges and we would like to thank all of the staff and wonderful caregivers of those facilities for their care and attention to mom for the past 15+ years. At mom’s request, there will be no service.