Condolences to the family of Marie Martha Richardson | DrumhellerMail
06142021Mon 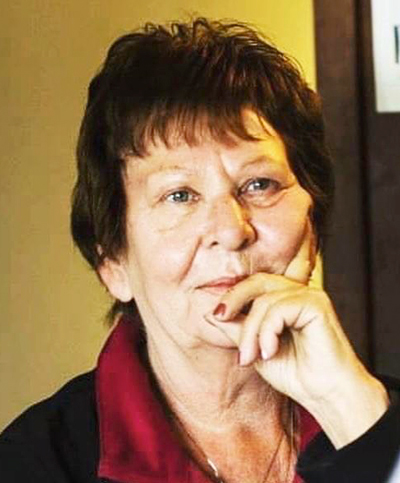 It is with heavy hearts that we said goodbye to our beloved Mom, Marie Martha Richardson, of Drumheller. The four of us were with Mom when she took her last breath, passing away peacefully on July 27, 2020, just after 10 p.m. Mom was 77 years of age.
Mom was born February 13, 1943, in Brandon, Manitoba, to Laddie & Mary Marcin of Kemnay, Manitoba. She attended primary schooling in Kemnay at a Catholic Nun’s school; Mom often spoke of the “whacks across the knuckles” with yardsticks or rulers from the Nuns when she would try to use her left-hand while being forced to become right-handed. Because of this, Mom became fluent both left & right-handed, but, she also developed a talent of being able to write backwards. If you held her backwards writing up to a mirror, you could read what she wrote, perfectly.
After she left school, Mom worked at the Hamilton, Hunt Law Office in Brandon as a paralegal. Shortly after, she met the love of her life, Tom Richardson. They were married on August 31, 1963, and had 4 girls – Sherry, Lisa, Tracy & Patti. The family relocated to Govan, Saskatchewan, where Dad & Mom took over the Imperial Oil Bulk Station. It was the work with Imperial Oil/Esso that eventually saw the family once again relocate in the mid-1970’s, this time further west to Drumheller, Alberta. Mom’s 4’ 11 ¾” stature could often be seen slinging cases of oil while wearing high heels. Dad & Mom eventually left Esso, and formed Richardson’s Bulk Sales – an oilfield hauling business. After they sold the business, Mom went to work at the Legion in Drumheller. Following that, Mom worked at the Drumheller Mail, but eventually went back to work with Richardson’s Bulk Sales until she was forced to retire in 2016 due to the onset of Dementia.
Even though Dad & Mom were divorced in the early 1990’s, they became and remained friends through to their end. They loved to attend functions and events, and parties – Mom loved to get dolled up and wear pretty dresses and high heels. They enjoyed a close-knit social circle and could often be found at a neighbor’s home or hosting neighbors.
Dad & Mom loved to take the family camping. They also attended many Bingos and casino trips together, and enjoyed their travels to Las Vegas over the years. After Dad’s passing, Mom would often ask us girls to “take [me] to the office”….which was code for a Casino trip. Mom also had opportunities to experience travel to the Barbados, Mexico & Hawaii which was perfect as she loved to worship the sun.
In late 2016, Mom went to reside in the Continuing Care Unit in Drumheller. But, she was excited when she was able to move from there to the Hillview Manor in 2019, giving her freedom to enjoy more aspects of her life. Mom took ill in early/mid-July, and was moved to the Red Deer Hospital where she passed away from a number of health issues.
Mom is survived by her 4 daughters: Sherry (Jim) of Fairmont Hot Springs, BC; Lisa of Drumheller; Tracy of Drumheller; and Patti (Ted) also of Drumheller. Mom is also survived by her 8 grandchildren - Jasmine, Jordan (Mathew), Brandon (Megan), Mitchell, Brett (Brittney), Nikki, Steffanie (Scott), and Savanna; and her 9 1/2 great-grandchildren - Riley, Zoe, Alexis, Bennett, Quinn, Annabelle, Jack, Summer, Dominic, and “baby Peanut”. Mom loved every minute she spent with family, but had a great love for her grandchildren & great-grandchildren. She was famous for her cabbage rolls and meatballs, and could often be found stocking the freezers of her grandkids.
Mom is also survived by her sister, Margaret (Cecil) of Kemnay, brother Alec (Ann) of Brandon, and numerous nephews and nieces, and their families.
Mom was predeceased by her parents, Laddie & Mary, brother Stan, and ex-husband Tom.
A private family funeral service will be held.
Those who wish to make a donation in Mom’s name, may do so to the Alzheimer Society of Canada.
Courtney-Winter's Funeral Chapel in care of arrangements. 403-823-2666.