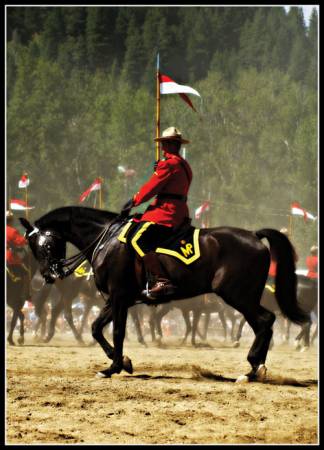 Don’t try returning your tickets for Drumheller’s first ever hosting of the RCMP Musical Ride: the event is a go despite misconception over recently cancelled shows elsewhere in Alberta.
The traditional RCMP display of equestrian showmanship will be held at the Stampede Grounds on Wednesday, August 11.
This year’s tour came to a halt after one of the horses contracted a contagious bacterial infection, but returned July 23 with a show in Edmonton.
Drumheller’s event will go ahead as planned.
“It is a phenomenal opportunity for Drumheller to host this,” says Staff Sergeant Arthur Hopkins of the “ballet of horses”.
The Drumheller detachment will play a minor role in the ride, but will be in attendance and on hand if needed.
Proceeds from the August 11 event are going to Big Country Victim Services, which support victims of tragedy from Oyen, Hanna, and Drumheller, and the Drumheller Agricultural Society, who is providing the Stampede Grounds.
The event will feature two performances, one at 2 p.m. and one at 7 p.m.
The Stampede Ground barn, turned stable for the event, will be open the night before (Tuesday) for interested visitors to meet the horses first hand.
Today, in keeping with tradition, the Musical Ride is performed by a full troop of thirty-two riders and horses, plus the member in charge.
The Musical Ride consists of the execution of a variety of intricate figures and cavalry drill choreographed to music.
Demanding utmost control, timing and coordination, these movements are formed by individual horses and riders, in twos, fours and eights at the trot and at the canter.
Months of training, practice and many kilometres around the riding school make horse and rider one.
The horses must not only appear in the Musical Ride, but on Parliament Hill, in parades, special events and have the ability to travel and adapt to different environments, not to mention hours of petting and photo-taking the horses must patiently endure.
“This is a great opportunity for the community to benefit from,” says Hopkins.
The native dancer who was well received at the 2010 Olympic celebrations in Drumheller will be performing at the Musical Ride.
The Musical Ride was developed from a desire by early members of the North-West Mounted Police to display their riding ability and entertain both themselves and the local community.
Considering the original Mounted Police members had a British military background, it was inevitable that the series of figures they performed were traditional cavalry drill movements.
Although legend has it the first Musical Ride was performed as early as 1876, the first officially recorded Musical Ride was performed in Regina under Inspector William George Matthews in 1887.
The Musical Ride, consisting of twenty men, was put on public display for the first time in 1901. Over the years the popularity of the Ride has grown and it has become a familiar sight throughout most of the world.

Local resident face and body painter Lucie Brouillard can relax for a while now, she has finally achieved a long time ambition.
On Sunday, July 18, in Austria, she became the World Champion Body Painter in the brush/sponge category, a title that had eluded her for the past three years, coming third place on each of her attempts.
“I don’t know, I felt very confident this year. That’s the one I wanted. So it’s all done. I have the feeling it is done now,” she told inSide Drumheller.
When Brouillard featured in our February, 26 edition of inSide Drumheller, she had just come back from Las Vegas, where she had won the first North America Body Painting Championship and brought home her 13th award at top championships.
She set off for Austria determined this was going to be her year, working with the same model as she painted in Las Vegas, Viktoria Law.
“When we won in Vegas, we collaborated very well together, we get along and I like her because she has, in my eyes, the perfect body for painting. The feeling of winning as well creates a great bond. She has been doing this for seven years and has never won the first place, so for her, too, it was really nice,” said Brouillard.
Good choice, some might say, as models were affected by the heat in Austria, in the high 30s everyday. “I was lucky because my model was half Asian so she didn’t sweat as much as the other models. Working in this heat becomes quite a challenge,” she explained, adding many models fainted during the contest.
While body painters could work in teams of two, and for each theme were allocated six hours to paint their model, Brouillard decided to do it alone, and that got her a new nickname: “The Painting Machine”.
The themes for the painting this year were “Sub Cultures“ and “Sources of Power” and Brouillard won by nine points in the brush/sponge body painting category.
“The competition was close,” she said, “There was a lot of good quality work there.”
At the World Championship this year, Brouillard slid down one place in the face painting category, coming second.
“Actually, I was happy to get second, it gives room for another person. A Mexican artist won first place. She really did a beautiful piece.”
With the world title for body painting under her arm, Brouillard is now concentrating on her longer term plans: to teach body painting at an international level.
“It’s looking good. So far, I am booked as an instructor in Brazil in January, and I am going to Australia to teach and to judge a competition in February. And that all came in the last week, before I got this title... My aim is to be a good instructor, enough that people really want me and I’ll say, ‘Okay, I’ll go, but you don’t need to pay me, just pay the fare for me and my family [her partner and her two children]. That’s my big plan, so I can bring my family with me to visit the world.”
Brouillard said she will not be entering the competition next year. “You need to give the chance to other people. I have had everything I wanted, now I just want to teach. I am happy, I got my wish.”

The landscape overlooking the Drumheller valley has seen a dramatic change especially for motocross riders.
The signature finish line on the motocross track at the top of the South Hill, which stood for more than 20 years where bikers flew across to claim the checkered flag, has been removed. While it was a recognizable landmark to many, the change excites members of Drumheller Off Road Vehicle Association (DORVA).
The jump’s absence is a sign of progress as DORVA prepares to host races this summer on August 7 and 8.
It has been about five years since the track hosted a race. The club expects 400-500 entries for the event. On top of that, there will be 300-400 spectators.
“We’re hosting Round 1 of the fall series,” said race director Casey Christensen. “It is one of the seven rounds, and all seven are points races for the Southern Alberta Championship.
The Alberta Dirt Riders Association sanctions the race.
He said while there is a big crowd of racers and spectators coming to the event, expect to see some local riders from the club competing at the event.
To prepare for the, event Christensen said they have done extensive repairs and renovations to the track to make it race ready and safer.
“We’ve done a redesign and rebuild of the track to incorporate a bunch of safety standards and new jumps,” he said, adding the direction of travel has been reversed.
The race is a signal of a dramatic turn around for the club, which clawed its way from impending doom to vibrancy.
“Things are really opening up with the club, it’s been great,” said Christensen. We are looking at having in the area of 90 members. We are starting to get recognized around Alberta.”
Along with the renovations to the main track, they opened a peewee and intermediate track, and installed a playground.
“They (the tracks) have all been redesigned, rebuilt and refaced,” said Christensen. “They incorporate all kinds of different challenges for all different riders.”
He explains the safety is built into the track and designers and builders pay attention to blind jumps near corners, and pinch points coming out of the curves.
“On the volunteer side we have a strong core of volunteers, things are happening,” he said, adding they have received strong support from businesses in the community through sponsorship.
Christensen explained the moto-crossing image of breaking bones at breakneck speeds has changed a lot in the last few years.  The sport is now more family oriented. The race format has also changed. Rather than pulling bikes off a truck and hitting the track, families roll in on Friday to set up camp. Saturday is designated as a practice day to learn the track and gain experience, and Sunday is race day.
Christensen said volunteers are always welcome, and those wanting to get involved in the race or in joining up with DORVA contact Christensen at 403-820-1574.