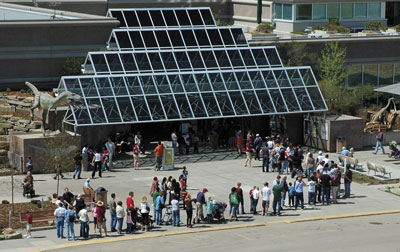 From September 18 to 20 join the Royal Tyrrell Museum for a series of activities and events in celebration of Alberta Arts Days. Admission to the Museum is free all three days and there is truly something for everyone!
Friday, September 18, the Museum is hosting two complimentary webcasts. Have you ever wondered what colour dinosaurs were? Whether or not they had feathers? Which were the biggest, fastest or meanest? This is your chance to find out!
Starting Monday, August 31 until noon September 17 you are encouraged to submit questions about palaeontology, dinosaurs, and palaeo-art at tyrrell.info@gov.ab.ca. Then, on September 18, log onto the Museum’s website at 9:00 a.m. and 10:30 a.m. to discover more about Alberta’s prehistoric past.
On September 19 and 20, in addition to our regular public programs, there are special Palaeopalooza activities.
Saturday, enjoy palaeo face painting or become a film star on the Museum’s YouTube channel. Sunday, watch a 3D chalk mural by artist Mark Cromwell of the Color Club in Calgary come to life on our plaza or participate in a free art class, with instructors from the Badlands Gallery, in our dinosaur hall.
It’s fun for the whole family! It’s Palaeopalooza 2009! 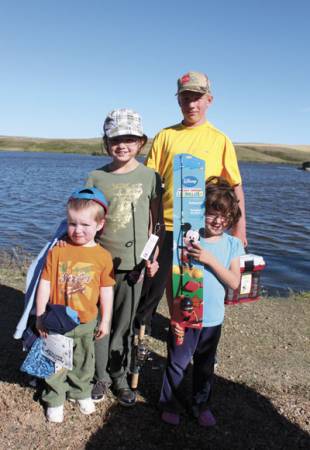 They came they saw, they fished.
The 15th annual Ryan Savary Memorial Fishing Derby went at Michichi Dam last Saturday, as 48 headed out on the water or along the banks to fish out some trout, and a few prizes.
They say a bad day of fishing is better than a good day of work, and for many of the contestants, the fish weren’t biting. In fact, only five fish weighed in during the event. Despite this, organizer Katrine Stone, sister of Ryan Savary was happy with the outcome. The event memorialized her brother who passed away in a car accident, and also contributed $440 to the Drumheller Salvation Army.
The ones that were successful in getting bites seem to be the usual suspects. Angler Adam McCann took the top spot this year with his catch of 3 pounds, 12.6 ounces. He claimed the $300 cash prize. In fact, this catch vaults him into the history books of the Ryan Savary Derby with the most catches of any participant.
Bill Lapham placed second with a 1 pound, 14.6 ounce catch edging out third place Ron Jacobson by just 0.4 ounces. Blaine Zacharuk won fourth place and a Shimano graphite rod.
Because of the lack of catches, the remaining prizes were drawn for. Stone said it worked out well for some of the young anglers, as most all the youth who participated received prizes.
Stone is thankful for the support for the event as it has continued for a decade and a half, and she is already thinking about next season’s event. She said Frank Baron of Starland County was helpful, and the county even donated a number of prizes, as did Steve’s Painting of Drumheller.
She is also grateful for the help and support of Mickey Poland and Ken Marquardt who have attended all 15 derbies. 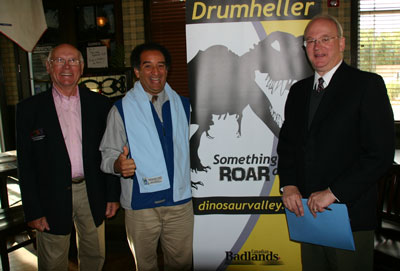 When the Olympic Flame arrives in Drumheller in just 17 weeks time, Martin McSween, nominated as Drumheller’s community torchbearer to light the celebration cauldron for the Vancouver 2010 Olympic Torch Relay, will proudly carry it.

Martin is an addictions councilor with the Province of Alberta and is known in the community for his outstanding volunteerism in the valley. Martin’s 19 years of involvement in Special Olympics and his extensive connection with various local sporting groups, made him an ideal choice to represent Drumheller.

“We’re pleased to announce Martin McSween as Drumheller’s torchbearer for the Vancouver 2010 Olympic Winter Games,” said Mayor Bryce Nimmo. “This is a once-in-a-lifetime opportunity for Martin, who is one of 12,000 Canadians chosen to carry the Olympic Flame on the longest domestic torch relay in  Olympic history! On January 16, 2010, we want everyone in our community to join together with other Canadians and show the world how inspired we feel by the Olympic Flame and its message of peace, brotherhood and friendship.”

Martin’s contribution to sport in the valley is impressive. Mr. McSween has been coaching soccer in the valley since 1995 and this year his U-18 soccer team won the gold medal in the provincial finals. Martin started a recreational ski program, a Special Olympics alpine ski racing program and has coached various athletes in Drumheller. In 2005, Martin arranged a Team Canada alpine ski training camp to help prepare for the 2005 Special Olympics World Winter Games. In 2008, he was selected as one of the coaches for alpine skiing for the World Special Olympic Games in Boise Idaho.

Midway through the two-hour celebration program, Martin will carry the Olympic Torch on its final 300 metres to the stage where he will light the 1.3-metre high celebration cauldron, in a move similar to the dramatic highlight of what will occur during the Opening Ceremony for the Vancouver 2010 Olympic Winter Games.

To celebrate the arrival of the flame, The Drumheller Olympic Torch Relay committee is planning various activities the week prior to the torch arriving in Drumheller.

Initial community excitement and involvement has been superb. The flame and the official ceremony will take place at the Canadian Badlands Passion Play site.

The 106-day Olympic Torch Relay, which is presented by Coca-Cola and RBC and supported by the Government of Canada, will visit more than 1,030 communities and places of interest in every province and territory.

On February 12, 2010, the Olympic Flame will make its way to downtown Vancouver to light the Olympic Cauldron in a magical and awe-inspiring moment before three billion people worldwide, signalling the kick off to the start of the Vancouver 2010 Olympic Winter Games.