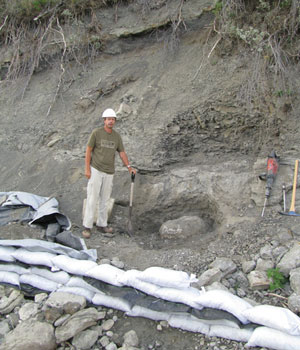 CT technologists at the Drumheller Health Centre had a one in a million experience in December as they  scanned their oldest patient to date, a 75 million years old fossilized piece of bone.
The specimen was brought over by The Royal Tyrrell Museum to be scanned using CT technology which gives cross sectional images and the data they acquired was instrumental in revealing a very unusual find.
Over a year ago, work started at the Tyrrell Museum on a new fossilized horned dinosaur.
The fossil was found in 2007 when a geologist who was working in the South West part of the province along Old Man river, saw a snout poking out from some rocks.
Darren Tanke, technician at the Royal Tyrrell Museum, then started excavation and collected part of the specimen.
Excavation was stopped when there were concerns about the stability of the hill side, resuming in 2008.
So far a whole skull, with no lower jaw, and a neck frill were recovered, the whole piece being about two meters long.
Don Henderson, curator of dinosaurs at the Royal Tyrrell Museum explains they collected the important sections and how significant frills are: “from the neck back all those horned dinosaurs are very similar.  The only way you can tell them apart and the only way they would have told themselves apart and recognized their own kind is via frills and the horn on the nose, bump above the eyes.”
Henderson explains that generally a frill is partly a bone that grows out of the skull but there are also bones in the skin that fuse on to that skull as the animal gets older.
When Darren Tanke started to work on the fossil, he noticed some strange patterns on the frill and wanted to ascertain whether these bumps were part of the original skull or whether they were bones from the skin that had fused on.
Such a specimen being quite rare, they wanted to avoid cutting it open so as not to lose even a few millimeters of bone.
“If the rock is the right kind and the cement holding it together is OK, we can peer inside using a CT machine, it doesn’t always work, a lot depends on the type of fossilization,” explained Henderson.
“We would normally take it to Calgary as they have a bigger machine and a permanent technician but we were able to use the CT machine in Drumheller”.
During a period when no patients had been booked, and on the understanding that should an emergency occur the project would need to be postponed, CT technologists at The Drumheller Health Centre figured out the best techniques on how to scan this unusual item.
Henderson and Tanke took two CDs with them, one containing photos with an image viewer and another one with DICOM images.
On reviewing the CT data, Henderson and Tanke were surprised by what they saw,  “we wanted to see how these bones were attached. If we could see a suture then we would know they were originally separate and they had grown together.  We were expecting just a simple contact between them but it turns out one of the bones looked like it was clasping the small bone that it was originally separated from, it is growing around both top and bottom of the skull bones,  normally  you’d expect just a simple flat contact and it is easy to track its growth, but now we see from using the CT data that  it is actually a much more complicated way of growing, the contact between them is much more developed, it really is tightly fastened on.”
This was the first scan taken on this find and the research is still at the very early stages, expected to be completed within the next six months, “we haven’t received the final answer on this...we are waiting to see if there’s going to be any more opportunities for putting pieces in the CT machine” explained Henderson.
The name of this specimen? “It is so new, it hasn’t got a name yet,” confirmed Henderson. 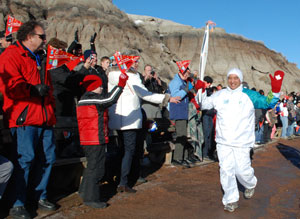 To cheers of a proud and appreciative crowd, Martin McSween jogged through the Passion Play Site to the stage to light the Olympic Community Cauldron.
This was the climax of the event that had been in the works for a year and a half. The Olympic Torch toured the valley, and Drumhellerites were proud to be a part of it, as was Martin.
"I was a little overwhelmed coming around the corner. I’ve only seen this area filled for the Passion Play and a few concerts, but to see it for something I am involved in, I was impressed and taken aback,” said Martin.
“It was amazing to see people I knew, and athletes downtown jumping with flags. I have coached a number of athletes in town, not just Special Olympic Athletes, but generic athletes, that may one day become Olympians.”
As well as being surrounded by the community of Drumheller, Martin also had his own family who came from throughout the province to cheer on his relay. He took a moment to recognize his mother, who could not be at the ceremony. She has been battling cancer for 19 years.
Martin had a message for those wanting to make change in their community. He said these traits are “being true to yourself, keeping a good outlook and looking forward always. Using what is behind you for learning, but always looking forward.”
Martin’s short journey to the stage came after the Torch toured downtown Drumheller, and then out to the Passion Play Site. Jordan Phillips of Delia carried the torch past the World’s largest Dinosaur, and Rav Lal handed the flame off to Martin as he entered the amphitheatre. The route was lined with supporters of the Torch Run, all cheering it along to its final destination.
Those who were able to secure tickets to the Passion Play Site, took in top notch entertainment from local talent as well as the headliner Corb Lund, and entertainment provided by major sponsors RBC and Coca-Cola. At the event, RBC made a $5,000 commitment to the Badlands Community Facility.
Mayor Bryce Nimmo sent praise to those that took part in the celebration.
“A year and a half ago when we were asked to be a hosting community, there was no question in my mind the answer was yes. I knew we had volunteers that could do a wonderful job,” said Mayor Nimmo. “I am so proud of them…and I am so proud of our citizens. Look at you out there, it is just a wonderful day. Aren’t we lucky to have the Torch in Drumheller?"
Co-chair of the committee to organize last Saturday’s celebrations, John Sparling, was happy with the success of the event, and was especially proud of the recognition it received from VANOC.
“During the event, the VANOC Master of Ceremonies commented upon the uniqueness and beauty of our venue as well as the phenomenal turnout to this event,” Sparling told Drumheller Town Council at its regular meeting on Monday, January 18. “The MC said this was the most exceptional setting for the Torch Run that they had to date. They sincerely recognized our excellence in planning.” 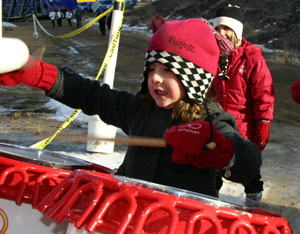 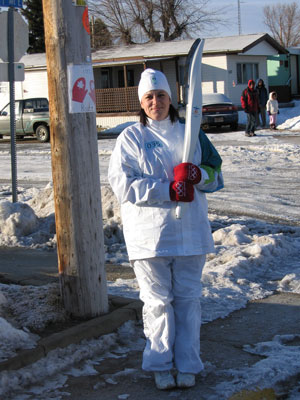 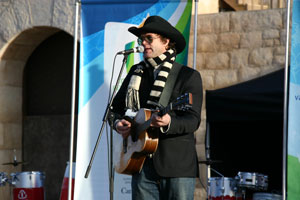 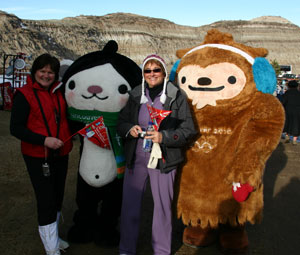 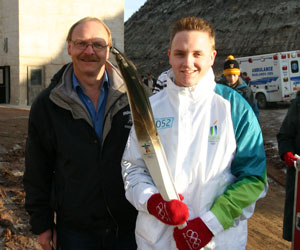