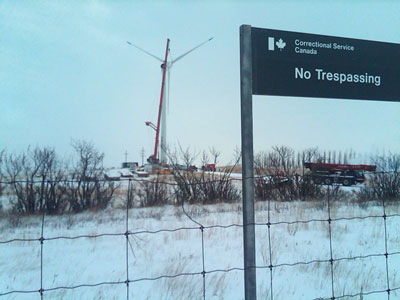 The Drumheller Institution is in lock down until Thursday, April 15 to conduct a planned search for contraband.

This follows a seizure of  $150,000 worth of contraband including cell phones illegal drugs and tobacco on Sunday, April 11.

The search is for items such as drugs, weapons and cell phones to ensure the safety of the public staff and inmates states a press release.

The Institution employs a number of mechanisms to control the flow of drugs into the penitentiary including searches of offenders and visitors, ion scanners, drug dogs and searches of buildings.

The release further states as part of CSC’s Transformation Agenda, it is strengthening measures to prevent contraband from entering institutions, in order to help ensure a safe and secure environment for everyone, and promote a rehabilitative environment for inmates. 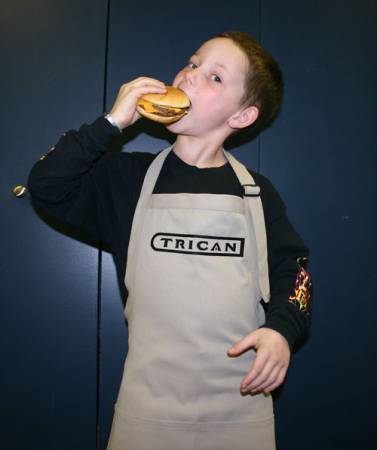 Seven year old James Zuccatto, of Nacmine, has been canvassing hard in the streets of Drumheller for the last two weeks.
He is raising money and, in the process, getting some training, for the walk he and his team are doing on Sunday, June 6: The Red Deer Telus Walk to Cure Diabetes.
At the age of 3, James was diagnosed with Type 1 (formerly called juvenile) diabetes. In his short life, he has had over 8,000 needle injections, and 10,000 blood tests.
James has learned to cope well, injecting himself in the legs in the summer, his mom Heather explained to inSide Drumheller. She does the shots the rest of the time, adding, “He is on a sliding scale so he can eat whatever he wants within moderation.  If he eats cakes or treats, he takes insulin too.”
“We have had a lot of struggles with the medical field as far as people not knowing about diabetes. It has come a long way,” said Heather. “It was time for us to do our part.”
Well aware this keeps him alive,  James also knows injections are not a cure and will not protect him from the longer term complications associated with the illness, such as blindness, amputation, kidney failure and more.
So James and his team, “James’ Gang”, are joining the thousands who will walk 5 km to find a cure.
To help with the team’s fundraising, he and his family are organizing a BBQ on Wednesday, April 21 from 11:30 a.m. at Trican Base in Drumheller.
Food on offer will be hamburgers and macaroni salad and there will also be a silent auction. Many items were donated by businesses in the area.
James’ Gang also has a facebook page, called “James’ Gang..Walk for Diabetes..Find a Cure”, which his mom maintains. Donations can also be made through the Telus Walk to Cure Diabetes site at www.jdrf.ca/walk, search for the team “James Gang” or participant “James Zuccatto”. 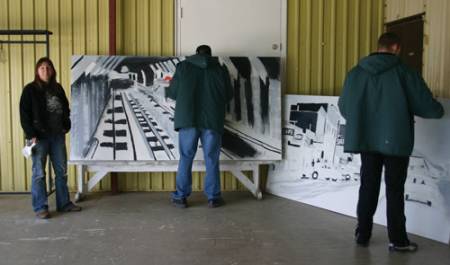 Local artist Vicki Myers and two inmates from the Drumheller Institution have rolled up their sleeves and have started painting the murals for the CN corner beautification project.
As explained in inSide Drumheller, January 8 edition, the murals, based on old photos of Drumheller in its coal mining days, will be erected at the site known as the CN corner, located at the intersection of South Railway Avenue and 2nd Street West.
They are part of a project led by Communities in Bloom in association with the institution’s Inside Out program and many other businesses to beautify this area of Drumheller.
Working at the Ag Society Stampede Barn, the project posed a challenge to both Myers and the inmates as none had done this before.
“At first the inmates weren’t too sure what they were doing, because they started the project from scratch,” explained Myers, “from building and priming the canvasses, then receiving a one day painting class. After that one day, they both took to it really well and they were interested and wanting to do it.”
As neither inmates had painted before, they were both unsure about the project.
“I had never done it before, I didn’t want to mess it up,” explained one of the inmates to inSide Drumheller.
But this soon changed as the painting progressed.
“I wasn’t sure how it would turn out, but it has worked out and it is starting to grow on me,” said the other inmate.
Myers told inSide Drumheller she was impressed how quickly the murals were shaping up with only two inmates painting, and explained this is the right amount of people for the project.
“It allows me to spend enough time with each of them to get them going so they can work independently,” she said.
Trish Parker, who drives the Inside Out program for the institution, is very impressed about the group’s achievements.
“I am so pleased our plan is coming together, I was worried about how it would turn out, I wasn’t sure Vicki would catch on to what we are trying to do and she did, now she is really excited and she sees the meaning of what we are trying to accomplishwith the inmates and how important it really is.
If we save one life by changing their attitude, believe me we have done a lot,” said Parker.
The project seems to have had the right influence on the inmates too, one of them telling inSide Drumheller, “At first I wasn’t sure about doing it, but it is giving back to the community and you have to start somewhere so this is a good start.”
Asked whether any of them had discovered a hidden talent and would carry on painting after this project, “Maybe fences and drywalls,” laughed one of the inmates. 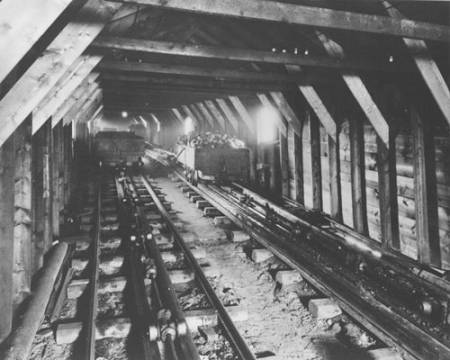