Currently the Drumheller Regional Landfill offers free recycling of paint, both from residential and commercial architectural paint customers.
A recent proposed change by the Alberta Recycling Management Authority (ARMA) is threatening to change the free service and Tammi Nygaard, operations manager at the Landfill is fighting hard to prevent this.
According to the ARMA, in 2009, Alberta was considered at the forefront in environmental stewardship, with their introduction of a tire, electronic and paint recycling program.
The program was introduced to divert increasing amounts of waste materials from municipal landfills and provided not only a free commercial paint disposal, but also recycling.
The program however, seems to have become a victim of its own success.
A levy was introduced on paint purchases at the start of the program to fund this and due to a downturn in the economy, the sales have dropped but the volume of paint recycled hasn’t.
Chris Nielsen, of DBS Environtmental, a registered paint processor for the program, explained to The Mail that the paint they collect is on average 10 to 12 years old. “It’s a strange position to be in to be in a financial crunch like this and it is wholly attributed to the success of the program,” said Nielsen.
Recently, a loan from the Alberta government also needed to be repaid by the ARMA and the program is now in deficit.
To remedy the situation until paint sales rebound, the ARMA has proposed to temporarily reduce the incentive payments made to paint processors by 15 per cent, to come into effect on April 1, 2010.
This means the processors, who are already operating at a substantially reduced cost as a commitment to the program,  will need to pass on the extra cost to the municipalities.
At present, municipalities pay nothing for the service as they receive a $50 incentive payment from the ARMA for each bin they have in place and they then pass this on to the processors as payment for picking up the bins.
Nielsen, the processor who recycles the paint from Drumheller and surrounding areas, explained to The Mail, “We have come to an agreement with the Town of Drumheller to introduce a fee of $50 on each paint recycling bin to cover the extra cost. We average about 40 to 60 bins for the whole zone each year.”
Ms. Nygaard is very unhappy with the ARMA’S proposed change as well as the short notice given, “I    t will cost municipalities double to recycle the paint. This happened three months into a new budget and we were not advised of this so nobody has budgeted for this, how are we going to recoup those costs?”
At present, Nygaard isn’t sure how this extra cost can be paid.  The fear is that the program will not be as successful if customers have to be charged for their paint recycling and she and other stakeholders from the Calgary area are therefore in talks with processors and ARMA to find a solution to the problem.
A meeting is taking place on Wednesday, March 24 with the Calgary Regional Waste Reduction partnership group where a representative from ARMA will attend to discuss this issue. 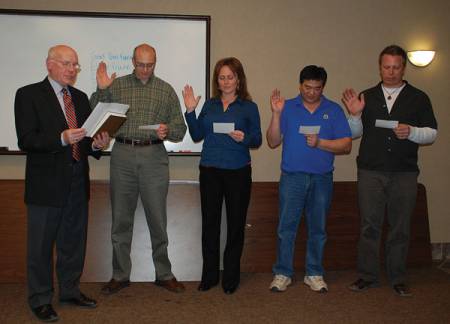 The Drumheller and District Chamber of Commerce has a full board of directors going forward into this year.
The chamber held its annual general meeting on Tuesday, March 23 at the Ramada. The chamber had five seats to fill on the board of directors, and six candidates, spurring an election.
Elaine Piwin of RBC in Drumheller and Gordon Van Kannel of Drumheller Co-op let their names stand. Piwin was elected to a three-year term, as were newcomers Ed Mah of McDonald’s, John Shoff of Reality Bytes and Connie Tremblay of Re/Max Drumheller. Van Kannel was elected to a one-year term in the seat vacated by Vicki Myers, who resigned from the board. Mayor Bryce Nimmo swore the new board members in.
It was an exciting year for the Chamber of Commerce. After MaxCampus completed a presentation on their services and first year of operation, they launched into business.
It was another stellar year for The World’s Largest Dinosaur. Between December 2008 and November 2009, 118,172 visitors climbed the World’s Largest Dinosaur. Chamber manager Heather Bitz reported this was the second busiest year for the World’s Largest Dinosaur since it opened in 2000. On the September long weekend the attraction welcomed its one-millionth visitor.
The dinosaur also gave back last year, contributing to a number of community groups through the Legacy Fund, and most recently made a commitment of $250,000 over the next five years to the Badlands Community Facility.
Jeff Hall, fundraising chair for the Badlands Community Facility expressed his appreciation to the members of the chamber for their support of the program.
Another highlight for the chamber was in August of last year when the Visitor Information Centre at the World’s Largest Dinosaur was accredited, which will enhance the centre’s visibility and allow the staff to promote the valley.
The Annual Chamber Golf Tournament was another success. Last year 130 participants came out, and with the funds raised from the event, the chamber was able to put $3,500 towards the Canada Day Parade and send local student, Alana Augert, to the Alberta Youth Entrepreneur Camp. They awarded bursaries to Nicole Stahl and Stanley Ituah and the chamber donated $4,660.15 each to Big Country Victim Services and DARTS.
Downtown Drumheller had another successful year. Mike Todor presented the committee’s report that highlighted a number of exciting events they were involved in, including the Olympic Torch Celebrations and Paint the Town Red.
Many of these activities benefitted local community groups including the Morgan Jayne Project, The Elks Club and the Drumheller and District Humane Society.
The group is ambitiously pursuing projects to enhance downtown Drumheller, including working on cosmetic improvements with Communities in Bloom, lobbying to bring the Alberta Main Street Project to Drumheller and working on long term plans for an outdoor market/ park recreation area in the downtown core.
Following the reports, the chamber’s Financial Statements were presented. 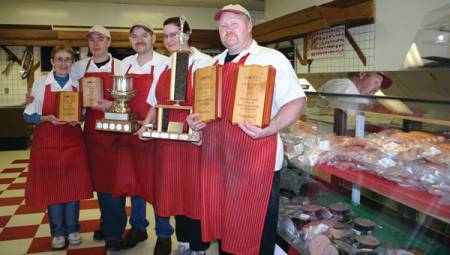 Drumheller Riverside Packers went to the Alberta 2010 Meat Industry Convention and Trade Show on Friday, March 12 in Edmonton, armed with their best ham, bacon, sausages and pepperoni and came back with armful of trophies, including the top one: the Challenge Cup for the best overall results.
Over 200 people came to the trade show and convention, organized bi-annually by the Alberta Food Processors Association to exchange information and knowledge through networking and to see presenters discussing marketing, new technology input to products and government programs.
It is also an opportunity to showcase products as there are two competitions to enter: the People’s Choice and the Processed Meat.
This year, 12 plants across Alberta entered the competition.
For the Processed Meat competition, exhibitors were judged on bacon skin on, bone in ham (fully cooked), back bacon, large casing sausage (cooked and smoked min. 4 inch casing), small casing sausage (cooked and smoked max 40 mm casing), emulsion sausage (any cashing form).
In this competition, Riverside Packers received:


The People’s Choice competition relates to jerky, pepperoni and deli trays. Riverside Packers picked up third place for pepperoni as well as for the deli tray.
During the dinner on Saturday night, they were awarded with the Challenge Cup for the best overall results, with 626.75 points out of a maximum of 700.