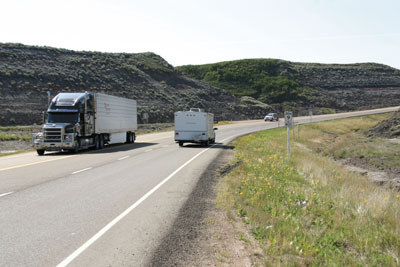 There is a chance the final stage of reconstruction of Highway 9 that will link Drumheller to Beiseker with new pavement could begin as early as this fall.
Dennis Grace, construction engineer with Alberta Transportation says the Highway 9 tender has been advertised. This is for the 15-kilometre portion from east of Carbon Corner to west of Beiseker. The project is to improve horizontal alignment, widening and resurfacing. It also includes improvements to the Highway 9 and Highway 21 intersection and second stage paving of the 14 kilometre phase west of Horseshoe Canyon and west of Highway 840, at the Rosebud turn off.
According to Grace, the tender was posted on August 24 and closes on September 11.
“Contractors can look at it and put in their tender. On September 11 we’ll open them and award it as soon as possible,” said Grace. “Whether they start this fall is up to the contractor. If the weather is terrible, they might just crush material for next year, or they might start. Really the schedule is his own, he just has to meet the completion date.”
For Mayor Bryce Nimmo this is news that has been a long time coming. He says the announcement is valuable to visitors and residents.
“Right now we are sitting and wondering about the growth of our town and tourism, and we ask why we would have not had that road earlier with the amount of tourism that comes here. I cannot understand why they didn’t upgrade this portion of the highway before anything else,” said Nimmo.
He says it is also a very important link of a transportation corridor, for the logistics industry.
The completion date of the project is October 15, 2010. 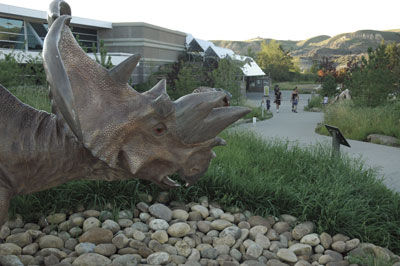 As soon as Drumheller residents thought it was safe to call their hometown the world’s top dino hot-spot, the magazine Smithsonian is asking a slightly more pretentious title claiming question.

Just weeks ago, the arts, history, sciences, and pop-culture magazine released the final poll results asking “what really is the dinosaur capital of the world?,” with Drumheller rightfully, and dominantly, claiming the title over Glen Rose, Texas.
Now the Dinosaur Tracking blog on Smithsonian.com is asking a slightly different question, “What is the top museum to visit if you want to see dinosaurs?”
When the poll went online on Thursday, August 20, the American Museum of Natural History had taken a lead over Drumheller’s own Royal Tyrrell Museum, but as of Monday evening, the Tyrrell has taken a staggering lead of 61 per cent over New York’s museum’s 36 per cent.
Smithsonian blogger Brian Switek had said of the Tyrrell, “This museum helped Drumheller lay claim to the title of the “Dinosaur Capital of the World.” Situated near many fossil-bearing deposits, the museum boasts an impressive array of dinosaur skeletons that seem even more imposing against the dark backgrounds of the exhibits. I have only seen the displays in photographs and television documentaries, but it is definitely a museum I would like to visit.”
Peter Proudlock had posted a comment on the blog stating that before provincial regulation ruled against, dinosaur fossils found in the Badlands near Drumheller were shipped to the American Museum of Natural History in New York.
Another commentator, Robert Llewellyn, posted, “For anyone that has not visited the Drumheller Valley in Alberta, Canada and walked through the hills in the valley, you are in for a treat. Walking anywhere in the valley, you will more than likely be stepping on dinosaur remains whereever you walk. The Royal Tyrrell Museum is a masterpiece of displays, many of which came from Drumheller, Dinosaur Provincial Park and other parts of Alberta. The museum is ever changing, this is why it keeps drawing the visitors back again and again. It is a training centre for those who wish to make the study of dinosaurs a life ambition.”
A total of 945 votes were made for six nominees in the poll, including the Field Museum in Chicago, the National Museum of Natural History in Washington, the Natural History Museum of London, England, and the Paleozoological Museum of Beijing, China.
To cast a vote for the top museum to see dinosaurs, and to keep the Royal Tyrrell Museum on top of the list, check out Smithsonian.com’s Dinosaur Tracking Blog on their Science and Nature page. 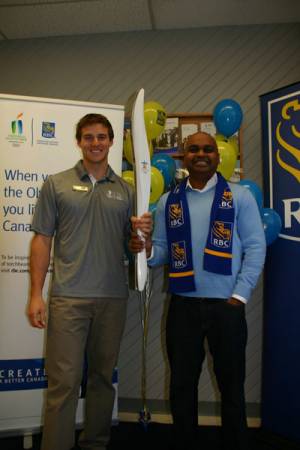 It was announced yesterday that Rav Lal is the first named person from Drumheller to carry the torch on the Olympic Relay.
Lal, who works in the IT industry, will be carrying the torch on January 16, 2010. He said he has known for three weeks and laughs that it was hard to keep it a secret.
“After a bit of jumping around and screaming, the first people I told was my kids obviously,” said Lal. “ It was very hard to contain myself, it is great honour.”
The announcement was made at a ceremony at RBC in Drumheller, which included RBC Olympian Brad Spence, a member of the Canadian Alpine Ski team. He commented on the meaning of the torch to him.
“For me the relay represents the fire in me that burns every day as I reach for the podium,” said Spence.
Lal was able to hold the torch for the first time at the ceremony for the crowd that gathered which included members of the Drumheller Olympic torch run committee and RBC regional vice president Doug McLean.
In the application, the perspective torchbearer is asked to make a pledge to his community to make a better Canada.  Rav pledged to urge people to donate used electronics to charity or for recycling. He also pledged to start giving free computer classes to seniors in the community, giving them the tools and the knowledge to communicate with their families and the world.
“I made a pledge that was meaningful to me and even if I was not selected, I’ll stick with it,” said Lal.
He says he will not know which segment of the run he will participate on, but it will be made known to him six weeks before he is to take the course.
The Olympic Torch Run commences in Canada on October 30, 2009, and will travel 45,000 kilometres and 12,000 Canadians will get to carry the torch along the way. As of Friday, the torch will arrive in Drumheller in 140 days.