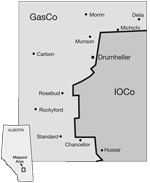 By all indications, it appears the split of the EnCana Corporation into two separate entities will proceed smoothly in the Drumheller area.
In May of this year, EnCana announced it was planning to split into two separate companies; one focused on their gas operations, with a working name of GasCo, while the other will focus on the integrated oil business, with the working name IOCo (Integrated Oil Company).
The company has laid out a timetable that will see the restructuring completed by early 2009. According to Luigi Vescarelli, community relations advisor in Drumheller, the split may be good news for Drumheller.
“By many measures the split has already been a success,” said Vescarelli. “In the Drumheller area for approximately the past two years, EnCana has had two divisions, basically operating independently.”
In the Drumheller area, the split will essentially be geographic. The one division, known as the Canadian Foothills division, operating in the Drumheller, Hanna, Coronation and Vulcan area will become part of the new gas company, which is expected to retain the EnCana name, while the Canadian Plains division will become part IOCo. It involves communities east of Drumheller.
“Both divisions have been achieving strong performance results,” said Vescarelli.
Read more: EnCana expects smooth...

The Town of Delia will hold a by-election for a new councellor on September 3, 2008.
The nominees for the vacancy were announced on August 6. The three candidates are, Wendy Lamarche, Bob Klappe and John Rogers.
“I am excited that we have as many candidates as we do, it is a great sign of democracy and whoever wins will be an asset to this community,” said Delia Mayor Gordon Isaac.
Some of the platforms of the candidates include improving infrastructure, attracting young families to sustain Delia, and paying closer attention to what taxpayers want.
“I am new to politics, but I think there can often be a disconnect between the tax payer and the politician, and improving on that should be a priority,” said candidate John Rogers.
Candidate Wendy Larmache says, “We need to attract more young families to Delia, if we do not have young families, the school dies, then the village dies. We need a new generation to keep our community alive.” 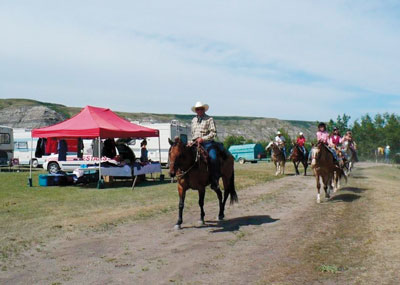 The annual Rumsey Ride for STARS set another record in its most successful ride ever, topping last year’s total.
The ride, in its 19th year is STARS’s longest running fundraising event. They went in hoping to top last year’s total of $29,781, it's best result to date.
On Sunday afternoon, August 10, committee chair Ernie Goddard announced from pledges alone, the ride topped $22,000. Figuring in the silent auction, poker run, quilt raffle and annual dinner, the event raised $31,811. These funds help keep STARS in the air.
Read more: Rumsey Ride tops $400K