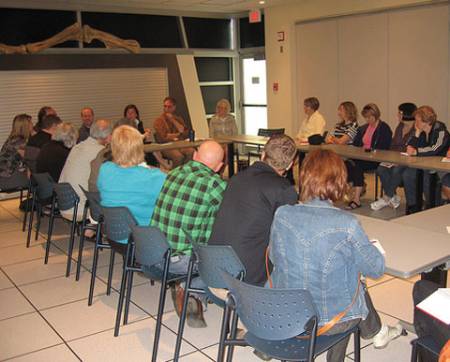 What would a town like Morden, Manitoba, with a population of just over 6,500,  want to learn from Drumheller?
Well, they have a museum, the Canadian Fossil Discovery Centre (CFDC) that has big plans: to build a state of the art facility, comparable to the Tyrrell Museum.
Early in June, the town received a visit from a delegation from Manitoba travelling the region on a “best practice mission”.
So what did they learn from their visit?
“The recurring theme that came up at every location we stopped at was the power of partnership and how it is essential to be working together with those around you,” said Tyler Schroeder, general manager of CFDC.
A year ago, the CFDC, along with the regional tourism partner, the Pembina Valley Travel Association, approached Travel Manitoba to get help with their new project.
“We said to them, ‘we have a lot to learn, why don’t we go and learn from the best?’ and that was to go to Drumheller, learn how the Tyrrell Museum built their product, learn how the region has developed around the Tyrrell, and learn about all the intricacies and partnership and all the strategies that have come into play to turn southern Alberta into a major tourism destination.”
Travel Manitoba agreed to help, through their best practices mission, and opened the opportunity up to the province.
The focus of the mission was called destination development, and 31 people signed up.
The delegation visited Rosebud, Drumheller, Fort Macleod, Lethbridge and Vulcan, meeting with leaders in tourism in each community, touring their identified highlights.
“The main factor for us to visit Drumheller is we house a collection of fossils that is the under water version of what the Tyrrell Museum have. A number of our fossils are on display there,” said Schroeder.
The museum being a hub in the area, Schroeder said the group was impressed to see how the town had developed the dinosaur product, particularly with the creation of the World’s Largest Dinosaur as a way to drive tourism traffic through town.
“We recognized that in order for us to succeed we need our local business people to buy in to our product.”
“I think the best example of that was the attitude of the executive director at Tyrrell Museum, Andy Neuman, a friendly, engaging guy who was interested in working with those around him. He wasn’t working in isolation or in a vacuum or thinking that the Tyrrell was an island. He realized the necessity for integrating himself and the museum to the community around him.”
Back home, the Pembina Valley Travel Association is working on developing new tourism strategies as a result of the visit, which has re-invigorated their approach to tourism said Schroeder.
Meanwhile, he returned back to his museum with an unexpected bonus: an offer from the Tyrrell to help them in their big plan.
“One of the great things that we learned as a museum is that we can rely on the support of the Tyrrell Museum. They have offered their support to us as we pursue building a state of the art museum and we look forward to a long term relationship with them.”
He added although their museum will never be of the same size as the Tyrrell, it compliments the Tyrrell’s dinosaur collection, helping to paint an overall picture of what prehistoric life was like in this country.
Shroeder said a feasibility study suggested a $25 million building for their new museum. 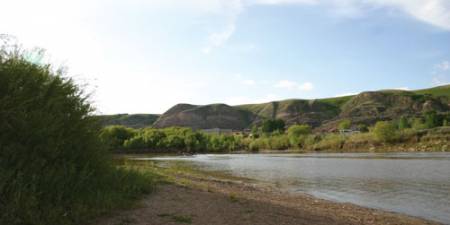 Contamination in the Red Deer River could be causing fish feminization according to a recent study done by researchers at the University of Calgary.
The focus of the study, published in the journal Environmental Toxicology and Chemistry, was on two rivers in the South Saskatchewan River Basin: the Red Deer and Oldman rivers, located in southern Alberta.
The study revealed a species of fish, the longnose dace minnow, has a 90 per cent female population in some downstream areas.
Tests taken from river water suggest contamination from estrogen-like compounds could be affecting the fish gender.
In 2006, samples taken from Tolman Bridge and Morrin Bridge revealed a high total concentration of natural and synthetic estrogens at both sites, with a high concentration of testostorone found at Tolman Bridge.
Samples were also taken from Drumheller, however the results were not immediately available when The Mail contacted Hamid Habibi, co-author of the study.
“In terms of general information, what we found essentially is distribution of these contaminants in that area so I wouldn’t be surprised if what we found in other places also occurs near Drumheller, because most of that area is agricultural land,” he said. In those type of areas, the river is exposed to contamination from feedlot and agricultural land such as pesticides and herbicides.
While the source of contamination has not been determined, some of the contaminants found points to cattle," said Habibi.
Zeranol, an anabolic steroid, was found during the study, and Habibi explained to The Mail that this contaminant comes from farms’ cattle because it is not used in human medicine and therefore is not likely to come from municipal sewage treatment plant, the other possible source of contamination.
While the study points to these contaminants changing the gender of fish in the affected water, their effects on humans are as yet unknown.
“One of the things we are doing right now is trying to do risk assessment for these chemicals to find out at what concentration would these chemicals be harmful. One of the things I find a little bit alarming is that the potency of these chemicals actually increases when we test the effect in a complex mixture. In other words, if we put them altogether, we see a more potent effect than testing them individually.”
Habibi hopes the result of the study will send a message to other researchers to do further investigation in that area and also hopes it provides information to the public.
“If people are concerned, which I am, I think they need to make sure they raise their concerns to the local representatives because in order for us to do more, we need help from the government. This is something the politicians find easy to forget, as the effect is not immediate. It may take years before the harmful effect becomes apparent.”
Habibi said they are now working on another project for the City of Calgary to build a sewage treatment plant and work on a technology that can remove the contamination.
“If that technology is developed in Calgary, it has implication for use in other places, including Drumheller and around the globe.”
Habibi’s message is clear: this study gives people the opportunity to act now before it may be too late.
“We can either sit back and deal with a disaster a few years from now, or we can be proactive. People can write to their MPs and MLAs and try to tell them they are concerned about these things and something needs to be done,” he concluded, adding that Alberta Environment should also be getting involved.
Carrie Sancartier, spokesperson for Alberta Environment told The Mail that compounds showing up in water were a concern in Alberta but also around the world.
She said Alberta Environment has been monitoring pharmaceuticals and other emergency contaminants in river water since 2005.