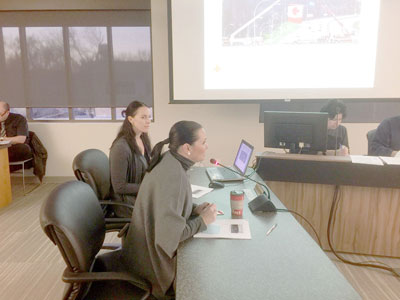 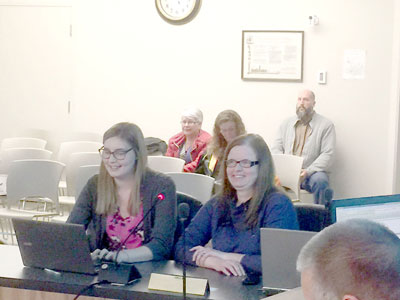 At the November 14 Town Council Meeting, Council completed both second and third reading of the bylaw to close a portion of airspace over the East Coulee Hotel. These readings were done after the bylaw was approved by Alberta Transportation. This is being read and passed for the purpose of constructing balconies with support columns on the second storey of the East Coulee Hotel.
•••
Council agreed to appoint Margaret Nielsen as the representative to the Marigold Library System. Mrs. Nielsen has served the maximum time as a Library Board member of three consecutive terms. She will serve as the representative for a term of three years which will expire in 2019.
•••
The Director of Corporate Services, Barbara Miller, proposed that the Town of Drumheller award the contract for banking services to Scotia Bank. Scotia Bank and Chinook Financial were found as the top two financial institutions after considering what all six financial institutions had to offer. Council agreed on a five year contract with Scotia Bank.
•••
Administration provided council with quarterly reports.
•••
The Chief Administrative Officer’s report included the completion of the Tourism Levy Report. The Land Use Bylaw Amendments were also passed. CAO Romanetz also said that during the third quarter, council was presented a draft of the Infrastructure Master Plan and it is anticipated the Asset Management Plan will be presented for approval in January, 2017. CAO Romanetz said that some of the Economic Development Strategy the Economic Development Task Force worked on was the establishment of a Wayfinding Signage Committee to review and recommend the development, design and implementation of pedestrian signage, the first Storefront Improvement Grant cheques handed out, and the submission of three grant applications.
•••
Director of Infrastructure Services, Darryl Drohomerski presented council with the priorities for the third quarter. They included; presenting the draft master plan; identifying needed improvements to the Water and Wastewater Treatment Plant and including it in the budget for 2017; the street improvement program, which took longer than anticipated because of weather related delays; completing the water main replacement program; landscaping the East Coulee fill station; the completion of the arena handrail which has received positive feedback from the community; providing council with an airport report and the completion of concrete medians on Highway 9 South.
•••
Barb Miller, Director of Corporate Services, provided council with a report stating that property tax recovery went better than anticipated. Mrs. Miller said there was a noticeable increase in the number of residents enrolling in the monthly payment plan. She also said the E-billing campaign was going well. The STEP grant application was approved and new funding had become available. Mrs. Miller also provided council with the third quarter’s operating statements and noted the individual functions are trending on or below target.
•••
Director of Community Services, Paul Salvatore provided a quarterly report which included; wayfinding committee working through the initial design concept and tentatively scheduling the installation for November 2016; the development board featuring several new members and is focusing on a joint meeting with council to discuss economic readiness. The report also showed the heritage, arts, and culture policy was approved by council for $5,000 in municipal grants. Mr. Salvatore also said the Hillsview 2 project commenced and there are six houses that have completed construction. Affordable Housing has worked with CMHC and Drumheller Housing Administration and the Provincial Government has announced an affordable housing framework to be announced late 2017.
•••
Director of Protective Services, Greg Peters presented Council with the Protective Services Quarterly Report. Mr. Peters said Bylaw received 267 calls for service including parking issues, noise, animal issues, business licenses and issues related to property and upkeep. There were 58 calls for service reported by the fire chief, one was a fatal fire and was investigated by our fire chief in cooperation with RCMP, provincial fire commissioner and the provincial coroner’s office. According to Mr. Peters, 25 false alarms were called in the community within the third quarter and the director, in collaboration with the fire chief and the RCMP detachment, are looking to develop a bylaw for false alarms in the hopes of eliminating them. Mr. Peters said bylaw officers issued 136 weed notices and regarded that as a relatively high figure. It was attributed to the amount of rain received during the summer of 2016.
•••
Councillor Tara McMillan provided council with the Valley Bus Society report. Councillor McMillan said the Valley Bus saw 23% less calls this year. She stated the Carbon tax will affect the Valley Bus and will possibly be affected by the raise in minimum wage as well.
•••
Town Council switched over to in-camera matters.