Tweet
The Risdon farm is located south west of Strathmore. The farm’s roots go back to 1910 with the arrival of Harold and Francis Risdon from England. Harold’s son, Walter began farming in 1923 when he was only fourteen years old. In 1940, Walter (Alice) and his brother Dick (Irene), amalgamated and farmed under Risdon Bros., until Dick’s death in 1969. At that time Walter’s son, Doug, took over the business, with his father continuing to offer advice and to help at busy times. In 1975, Doug married Norma-Jean Hagen. Norma-Jean’s father, Robert Hagen was a secondgeneration farmer in the Cheadle area. His family emigrated from Norway in the 1920’s.

The present-day Risdon farm’s focus is on grain, hay production, a cow/calf operation, and a custom silage business. The Risdon’s have been using minimal disturbance seeding practices for about ten years. Doug and Norma-Jean manage the cow/calf operation of the farm, with Norma-
Jean doing the bookwork and record keeping. Doug and Norma-Jean’s son, Reese, has been a full-time farmer with Risdon Farming Ltd. since 2003.
Reese has expanded the number of seeded acres to four times the original amount and has
run the silage operation part of the farm, selling the silage to six feedlots in the area. As children both Reese and his sister, Brooke helped with the farm work. They were part of what was happening on the farm and learned much from the discussions and decision-making that went on around the family dinner table. Brooke continues to help when time allows, as she and her husband, Jesse Parker, have two young children.
Over the years, Doug has been a member of Kinsmen K-40, has coached hockey in Strathmore, was one of the founding members of the Wheatland Athletic Association and has continued to play
old-timer hockey.
Norma-Jean taught Sunday School and Play School as well as teaching at Strathmore Youth development Center and Wheatland Junior High, having retired in 2001. Their children took part in a number of community activities. These included skating, hockey, speed skating, volleyball, choir and soccer. The parents were involved in driving, supervising and fundraising for the kid’s sports.
Each member of the family benefited from belonging to the I.A.E.A. (International Agricultural Exchange Association). This association brings young people from outside Canada, mainly Europe and Australia, to Alberta, to live and work on a Canadian farm for five to eight months to learn various methods of agriculture. The Risdon’s hosted several students between 1980 and 1990.
In 1991 the farm received the Brand Recognition Award, for their brand which was registered on April 1, 1911, and had been used for three generations. The Risdon’s feel a special pride as they see their business grow and flourish. The involvement of their children, Reese and Brooke in the
farm also adds to this sense of pride. They look forward to a fourth generation of farmers with Reese’s three children and Brooke’s two children eventually being involved.
The Risdon’s hope they have helped to set the foundation for future generations to flourish in the agriculture industry, by setting an example of good business practices, based on hard work and commitment.
This dedicated and hard working family is a worthy recipient of the 2009 BMO Family Farm Award. 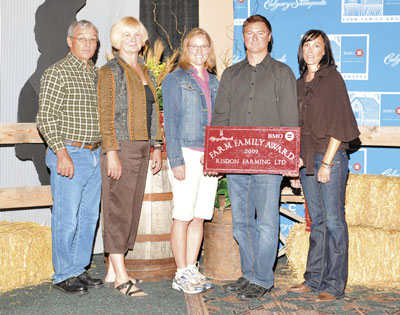