Tweet
Morrin School is dealing with the tragic loss of one of their own, following a fatal motor vehicle collision early Sunday morning.

Shane Raisbeck, 17, was ejected from a motor vehicle traveling on Highway 9 East, and succumbed to his injuries. Just last weekend Raisbeck graduated from Morrin School with his class. The community of friends, teachers and acquaintances are coming to grips with the loss.


“It is a pretty major tragedy,” said Morrin School principal Nick Thornton. “These kids have been together forever, and a loss like that has ripped everyone up pretty badly.”


According to a police release in the early hours of June 14, 2009, a pick-up truck, southbound on Highway 9 was descending the South Hill entering Drumheller. The pick-up truck entered the west side ditch and rolled. The passenger in the truck was ejected from the vehicle. He was transported to the Drumheller Health Centre, and then the Foothills Hospital in Calgary, via STARS Air Ambulance, where he died of his injuries.


The other occupant of the truck was treated at the hospital for minor injuries.

Thornton said the school brought in extra family resource workers to help students through the difficult period. The local member of the Prairie Land Regional School Division came and offered his support as well.

“This school is like a family and everybody rallied around,” said Thornton.
He adds some of the students affected by the tragedy were to write diploma examinations on Monday morning. Alberta Education was contacted and was very accommodating to the grieving students.

RCMP say the investigation is continuing, and are requesting assistance from anyone who many have observed a red and silver GMC pick-up truck driving north or south on Highway 9 during the late hours of June 13 or early hours of June 14. If anyone has information, they are asked to contact the Drumheller RCMP detachment at 403-823-7590.

A memorial service will be held for Raisebeck on  Thursday, June 18 at Morrin School.  The family asks that in lieu of flowers, donations can be made to the Morrin Ag Society. 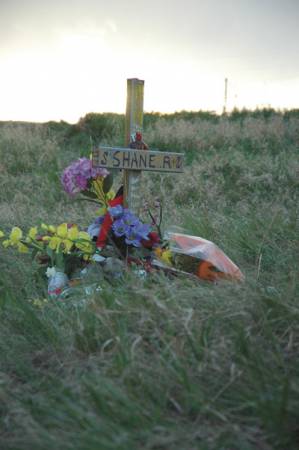