Tweet
In one day, a project from small town Alberta reached a landmark goal of raising enough money to impact a mostly-unknown, AIDs ridden country off the coast of South America.

The Morgan Jayne Project reached its goal of $80,000 on Saturday with $10,600 being raised in a single day with the project’s Thank-You Barbecue at Midland Hall.
That wasn’t all, as an hour into the barbecue another surprise was unveiled to the community and the visiting Valerie Nelson, the woman who gave her life to live on the small island of Roatan to run the project at ground zero.
Rolling into the parking lot with the crowd of nearly 100 people waiting anxiously, Hi-Way 9 painted the sides of a shipping truck with the smiling face of Morgan Jayne, which will spread the project’s message across Alberta’s highways everyday.
“I had asked (Hi-Way 9) if they’d put stickers on the back bumpers of their vehicles,” said project founder and father of the late Morgan Jayne, Fred Makowecki. “They said they’d do something one step better.”
The trailer is currently sitting on Highway 10 near ATB Financial for the rest of the week.
“Everyone’s talking about it, it was so well received,” Makowecki said. “It just floors me.”
“It didn’t feel like a fundraiser. We had friends and family, and family who are friends and friends who are family. Some people paid $40 for a burger. It was a truly humbling experience.”
“We met our goal for construction of the clinic, and the additional money will hopefully pay for furniture,” Makoweki said while adding that the project will never stop, reaching one milestone just makes room for the next one to be reached.
“We’re never done,” he said.
“Hospitals in Roatan are crawling with rats. Nearly 80 per cent of students don’t go to school, and those that do graduate in Grade 6. From your community’s heart to mine, thousands of miles away, you have made a tremendous difference,” Valerie Nelson said while being brought to tears.
The ground for the Infant Care Centre has been cleared, the building is being sent by barge from the mainland in Honduras, and now Makowecki hopes the centre will be in operation by the end of June or in July.
The Infant Care Centre will be capable of supporting 12 babies in need, but Makowecki predicts it will be more than full soon after opening.
“I want to give my heartfelt gratitude from me, my family, and everyone involved in the project,” Makowecki said.
“I don’t know where to begin with ‘thank-you’s’. It just furthers my desire she (Morgan Jayne) never be forgotten.”
Morgan Jayne, the daughter of Makowecki passed away unexpectedly in 2006 of sudden liver failure.
Upon Morgan’s passing, Makowecki ssearched and found Valerie Nelson in Roatan, and Morgan Jayne became the face and name of an organization Nelson had set up to benefit AIDs infected babies and children. 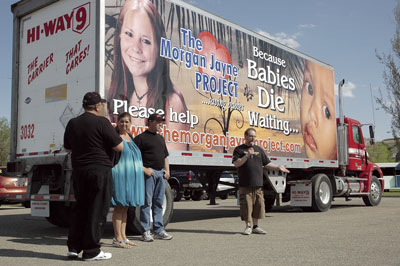