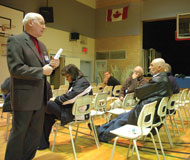 Gathering in the gymnasium of St. Anthony’s School, the Badlands Community Facility Steering Committee heard Drumheller’s concerns and thoughts at the first of three public meetings regarding the much-debated community facility.
Mayor Bryce Nimmo, along with some of the eleven members of the steering committee and five Town Councillors, presented their vision of the possibilities a multi-use “hub” would bring to the tourist based economy of Drumheller.
“This meeting will give us an opportunity to find out what the facility should look like, we don’t know that yet,” Nimmo said.
Facility priorities outlined for the twelve people in attendance were the hot-button words “multiuse”, “social hub” for community, cultural and recreational activities, and to provide services to satisfy the majority of users.
Overviewing the 2008 Census Survey which indicated the citizen’s top-wants for the facility are a community centre, aquatics upgrades, a second ice sheet, a fieldhouse (used for soccer, lacrosse, running, etc.), and an indoor children's playground.
But the twelve citizens who came to the meeting, didn’t necessarily care what the facility will have, they just want it done.
“We want to know what we are rallying behind,” an outspoken member of the audience said. "I’ve heard it will have curling, hockey, soccer, let's just make the decision on what the first phase is and just do it. Just do it.”
“We will get it done,” Mayor Bryce Nimmo told the gentleman, “Drumheller needs it, we will do it. We are just making sure as a council and committee we do our best and get it done the best way possible.”
One concern brought forward was, “what kind of time line are we looking at?"
“We have to have the application in by March 15 for a federal grant. We have to complete conceptual art by then, before going into mechanical drawings. We could have the shovel in the ground by fall of this year, if we submit the application by this spring,” Mayor Nimmo explained.
The estimated funding structure for the project is broken into three parts, municipal, grants (both provincial and federal), and fundraising.
The municipality will be dipping into $5.5 million of their reserves, with an expected debenture of $5.2 million in certified, fixed return loans. Borrowing will not exceed $5.2 million, and money has been set aside to cover the future cost of the loan.
Provincial and federal grants will account for 27 per cent of the final cost, at $6 million.
The community facility’s fundraising committee will have to raise an estimated $5.5 million.
Total expected capital cost for funding is $22.2 million. Future funding for the project could benefit from new grant opportunities, slowdowns in the construction sector because of the economic downturn, and lowered interest rates.
“We already have the reserves in place, council has been working on this project for five years. We are not starting from scratch... and we won’t put ourselves behind the eight-ball,” Mayor Nimmo said.
Estimated values for operating costs per property were also released at the meeting. Property with an assessed value of $100,000 is 10 cents a day, $200,000 is 20 cents a day, and $300,000 at 30 cents a day.
A concerned women asked the mayor, “ I live in downtown Drumheller, and my 2008 taxes went up 50 per cent this year. I’m worried what this facility will do to my taxes. Will the facility increase my property value?”
“Taxes will not go up to build, but after that operational costs may affect your taxes,” Mayor Nimmo replied.
Councillor Karen Bertamini added, “this facility will attract people to our municipality, not only tourists but employers looking for a good location for employees. Your property value may go up, but with more people being attracted to Drumheller it could very well work in reverse and ease the tax load.”
“I have spoken to these other mayors (of towns with facilities such as Bonnyville and Athabasca), and they didn’t have enough good things to say how their facility helped their town,” Mayor Nimmo said. “Council will make the final decision, but with input from you, who will decide where and what will go.”
Ending the question and answer session, Mayor Nimmo encouraged those in the audience with more questions to speak one-on-one with any of the eleven steering committee members at the event.
Members of the public is invited to attend the second and third community facility discussions on Wednesday, February 4, and Thursday, February 5 at the Drumheller Inn. The meetings begins at 6 p.m. and ends at 9 p.m.