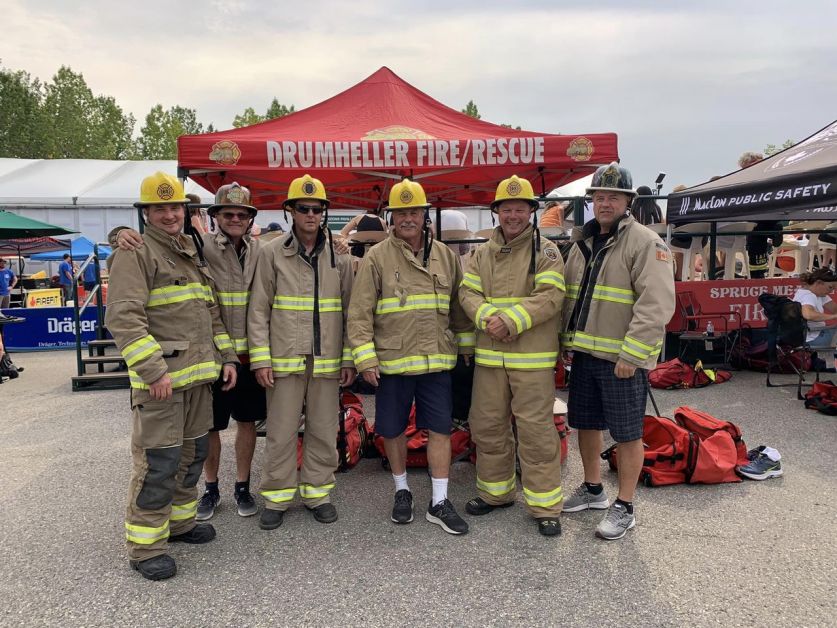 Six members of the Drumheller Fire Department competed at the Canadian and World FireFit Competition and came home showered with medals.
Each firefighter had to qualify for the competition at Spruce Meadows over the weekend of September 10. Individually and as a team, they shined on the course.
Duane Bolin said this is one of their best results ever.
“For sure it was, for bringing home plaques and medals, that’s for sure,” he said, adding this was his first gold medal at Canadians and the first medals at Worlds.
In the Canadian Over-60 category, Keith Hodgson won gold. In the Canadian over-50 category, Duane Bolin won gold, and Merv Smith won silver.
In the Canadian Over-50 team event, Bolin, Smith, and Hodgson won silver. In the Canadian, Over 40 team competition, Jonathan Molzahn, Jeff Gerlinger and Phil Thompson won silver.
In the TECH 2 relay Over-50 category, the team of Bolin and Smith won gold.
In the Canadian Over-50 team relay, Bolin Smith and Hodgson won silver, and then bronze in the World Over-50 relay. In the Canadian Over 40 relay Molzahn, Gerlinger, and Thompson won gold.
“We were kind of floored by the number of awards we won,” said Bolin.
He explains while this is the Canadian Championship, because there were competitors from the international community, they also participated in the same competition. He said FireiFit has expanded to have a European schedule.
‘FireFit is just starting to kick off there,” he said.
Bolin said the department members worked hard to get these results.
“We practice twice a week, and once we get closer to the competition, we would set up our course on the weekend,” he said.
He adds, the FireFit course challenges strength and stamina.
“It’s about keeping your overall fitness up. It is the big thing. Running stairs is your cardio piece, but then guys are usually doing straight training twice a week as well,” he said. “Someone might be a fast runner, but if they don’t have the strength to lift a hose or swing a hammer or pick up the dummy… that was the point of this whole obstacle course, it used to be a physical requirement for joining a fire department, testing your strength and abilities and everything else.”