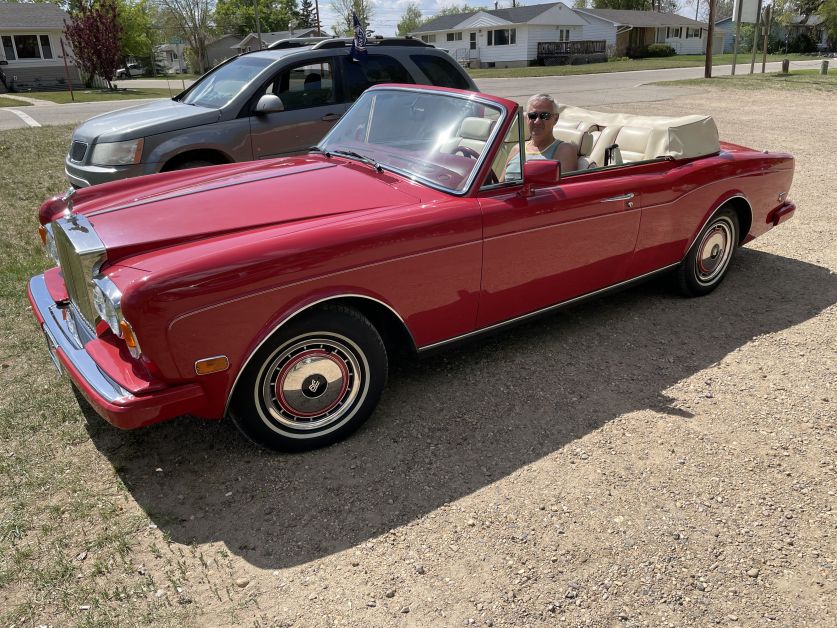 It is the epitome of luxury, it has a pedigree of celebrity ownership, and it now has a home in Ken Schinnour’s auto stable.
It‘s hard to miss a bright red convertible with white leatherwork, 1990 Rolls Royce Corniche 3. The 33-year-old car is completely original, and it all started with a deal on a china cabinet.
“It’s a true garage find out of Kelowna, it never hit the paper,” Schinnour tells the Mail.
The car was handcrafted for Trevor Deeley. Motorcyclists will know the famous name. He was instrumental in the growth of Harley Davidson in Canada. He was the first to carry Honda motorcycles in the English-speaking world, and in 1973, the Harley-Davidson Motor Company asked him to become its exclusive Canadian distributor.
Every detail screams 1990 and luxury; from the sheepskin floor mats, and the Motorola console phone, to the crystal decanters in the door pockets. The main difference between the previous Corniche 2 and the Corniche 3, was the fuel injection system. The car weighs over three tons.
“I’m pretty sure, only from my experience of cleaning it, that Deeley bought it for his wife. The year he bought the car, he would have turned 70,” he said. Only two seats were dirty in the car.
The car was sold at some point to David Dunn, who had his best seasons with the Vancouver Canucks in the NHL and went on to be an assistant coach for the team. He owned the car when Schinnour discovered it.
He explains Dunn had a property in Kelowna, but only visited periodically. When he did, the car was taken to shows the odd time. Last year they decided to sell the property.
A friend who lives in Vernon offered up a china cabinet her son has been storing, and Ken and Marcie went out to take a look.
They met up, and before they went to pick up the cabinet, the friend asked to pick up another piece from a garage that was in storage. They agreed and ended up at Dunn’s property.
Ken entered the garage and saw a car under a cover. Marcie peaked and saw an “RR” hubcap.
“So I went and pulled the cover up a little bit and saw it was red and was a convertible. I thought, ‘that’s cool, I had never heard of a Rolls Royce convertible,'” I didn’t know they made them."

It turns out, another potential customer had put a $500 deposit on the car and never returned. With two days until the property was to be sold, the seller was motivated.
“We ended up buying from David Dunn.”
After sitting for so many years, of course, it wouldn't start. Ken did manage to find a mechanic in Kelowna, who was up to the task, and the car was towed to the shop. In three days it was purring like a kitten.
Ken opted not to drive it home, especially with the age of the tires. So far, all that has been replaced has been the water pump, and fuel pump (twice). A few door dings and blemishes have been cleaned up. Aside from that, it is original.
He has owned the car for about a year now, and it makes its way up and down the valley, and was on display at the Valley Cruiser’s Annual Show and Shine.
Rolls Royce once used the slogan “Trusted to Deliver Excellence.” With his new ride, Ken found that it is “Trusted to Deliver Smiles while cruising the valley’s roads.”