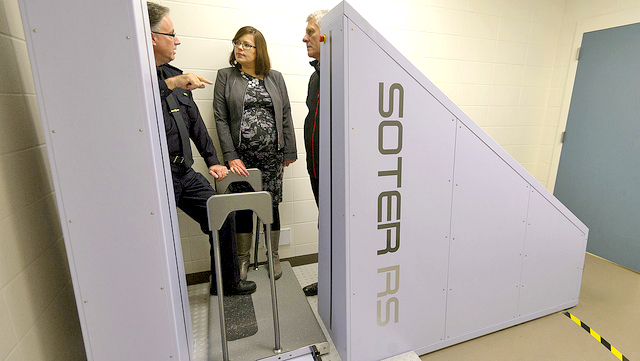 New legislation put forward in Ottawa would pave the way for body scanners to be used in federal penitentiaries, something the local union president says is “an absolute need” to keep the flow of drugs out of the Drumheller Institution.
Bill C-83 would allow the use of body scanners to be used on inmates, visitors, and staff at institutions, which would change existing legislation which says x-ray scans can only be conducted with the individual’s consent. Body scanners have been installed in provincial correctional facilities, including the Edmonton Remand Centre recently, but are not used by Correctional Services Canada. A CSC media rep told the Mail the new legislation will “allow the use of emerging technologies to enhance search capabilities while also providing less invasive alternatives to intrusive physical body searches.”
The legislation comes as the Drumheller Institution, along with facilities across the country, grapple with the flow of opioids through prison walls and the overdoses which follow. The Drumheller Institution recorded 19 suspected or confirmed overdoses in 2016-2017 and 14 for 2017-2018, up from just six confirmed or suspected overdoses recorded in 2015-2016. The Mail reported in October that 40 grams of carfentanyl, an opiate reportedly up to 100 times more powerful than

fentanyl, was seized by prison officials in the month of September, which was said to be “enough to kill a city.”
CSC says they are working to create a drug-free environment by implementing a drug strategy of “prevention, intervention/treatment, and enforcement aspects” which aims to reduce the supply of drugs, increase awareness of the negative consequences of illicit drug use, and reduce the demand for illicit drugs.
“Detecting drugs and contraband is an ongoing and challenging task. CSC relies on staff professionalism and attentiveness, in combination with detection equipment and a variety of approved techniques to prevent the entry of drugs and contraband,” a CSC media relations advisor said in an email. “These include searches of offenders, visitors, buildings and cells using non-intrusive search tools including ion scanners and detector dogs.”
But correctional officer union president for the prairie region James Bloomfield says the existing measures are not enough, as evidenced by the number of suspected overdoses and drug seizures recorded at federal institutions. He says body scanners are an absolute need for institutions now.
“It is absolutely one of the best tools I’ve seen in 20 years, I’ve never seen anything as effective as this is for the detection of narcotics,” Bloomfield said, adding the union has been lobbying members of parliament and Canada’s public safety minister Ralph Goodale, who they met with last week, for the changes hoped to come with Bill C-83.
“The laws of the federal system have held us back. With this new government, we asked as soon as we saw them but they've been dragging their heels.”
But the new bill brings concerns from prison staff over changes to how inmates are segregated. The bill would bring an end to “administrative segregation,” which is the ability for staff to separate inmates to prevent association with others. Segregation would instead be replaced with “structured intervention units,” which would be new environments to offer inmates with intervention strategies and programming to address their risks and needs in order to facilitate their reintegration into the mainstream inmate population.
“There’s a whole lot of problems with that one,” Bloomfield says. “Essentially we are going to be targets with no ability for us to house an inmate in an area separate from the rest of the institution… if an officer gets punched in the face, the inmate stays where he is under law.”
He says the union is lobbying against this portion of the bill as “it's going to create a serious issue for officers and increase the risk we face everyday.”
Second reading of the bill was held in late October, where it was then referred to the standing committee on public safety for review.