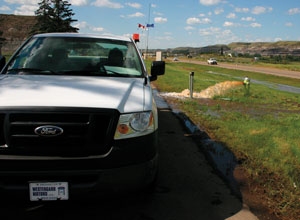 It appears the town has made some progress by taking a more strategic approach to clearing up water colour complaints.

On June 13 of this year the town issued the first of a number of press releases dealing with complaints of tinted water coming through area resident’s taps. One of the reasons identified for the coloured water was a mechanical failure at the water treatment plant that released an overabundance of a common water treatment chemical called Potassium Permanganate. In the process of flushing the system, more existing sediment in the lines was stirred, and the water colour problems have persisted.

Throughout this process the water treatment plant has been producing water that meets provincial standards.

On Thursday, July 24, the town took a more strategic approach to solving the problem in flushing a main transmission line.

The town began working to flush a line running from the water treatment plant to 19th Street East in an attempt to clear the line of sediment that had accumulated over the years. The line was installed in 1984.

The line was flushed at a velocity of 300 litres per second. According to CAO Ray Romantez the approach seemed to have been successful, as a significant amount of sediment was cleared from the line. Crews back flushed the line to isolate it from the majority of the system, however the high velocity contributed to more clarity issues on Thursday afternoon.

Since then the town has conducted isolated flushing to deal with individual complaints.

Romantez adds this was an inopportune time of year to complete a flushing program as it is a peak time of demand for the system, and they had to maintain levels to hold minimum pressure, as well as emergency needs.