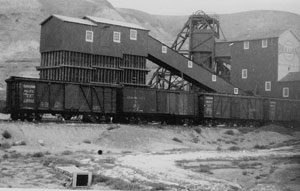 When coal was discovered in the Drumheller Valley, the rush was on for entrepreneurs and strong men to exploit the resource to fuel the country.

While some investors with big dreams arrived, they also arrived with big wallets. For many more, only the dreams were in tow.  This story, provided by Gordon Clozza, demonstrates how a group in the Italian community was able to pool its resources, and with a lot of hard work built a future and provided for generations to come.

The Stocco/Clozza family played a significant role in the Drumheller coal mining industry during the first half of the 20th century with the development and operation of two major coalmines - The Sunshine Mine and The Brilliant Coal Co.
It began with the immigration of Santo and Luigia Stocco from Italy to Calgary, by boat and rail. They arrived on May 6, 1913. Three years later, they moved to Drumheller and operated the Roma Grocery on Railway Avenue. In 1920 they sold the store to the DeBernardos, and moved to the Sunshine Camp located about two miles north of Wayne, Alberta.
The Stoccos and a few friends and relatives operated the Sunshine Mine until it ran out of coal. They then opened a new mine called the Superior Grade Mine (but still commonly known as the Sunshine Mine) across the valley on the facing hill.
While living at the Sunshine Camp, the Stoccos had three children - Reno, Rinaldo (Jim) and Tegla. Luigia became a single parent with the early death of her husband, Santo, at the age of 45 years in 1929. She was left to raise her young family alone.
In 1932, the Sunshine Mine closed and Luigia her family and associates moved to Midlandvale where they bought the Scranton Mine and leases (located on 17th Street NW, just south of the Longbranch Saloon). The owners included Luigia Stocco, Sandino, Martini, Guidolin, Florian and Eggenberger.
They operated the Scranton Mine for a few years, but had to abandon the site for lack of coal and room to expand. The Western Gem Mine (located north of the Longbranch) closed about that time and the Scranton owners acquired its remaining unmined leases to the north and east, and decided to build a new mine called the Brilliant Coal Mine Co. on the site occupied today by the partially constructed new Catholic school.
The Brilliant Mine was one of the last major mines in the Drumheller Valley. It continued operating for about 22 years until 1957, when it closed because it ran out of coal.
The Brilliant was managed by Joe Sandino, one of the shareholders, with Bob Dunn as the Pit Boss, and Angelo Clozza as the Fire Boss until he was promoted to Top Boss in 1949.
The Brilliant Mine was always well maintained and well equipped. If a coal mine could be described as “neat and clean”, this one was. When the Brilliant closed, Angelo Clozza was given the job of dismantling the tipple and selling the assets.
Angelo (Joe) Clozza had come to Drumheller from Italy in 1927 at the age of 17 years. Like many young men at that time, he had no choice but to work in the mines. Those included the North American Collieries, the Western Gem, the Scranton, and finally the Brilliant, where he spent most of his mining days. He soon learned the English language and obtained his Fire Boss papers.
He married Tegla Stocco in 1943 and they had two children.
Luigia Stocco remained strong, healthy and alert into her 90’s when she passed away. She and her associates worked hard in difficult conditions and circumstances to provide a better life for their children and grandchildren.
As well, they understood the importance of education, even though they did not have the opportunity themselves to pursue it.
Luigia’s son, Reno, was seriously injured in the mine as a young man. He then became a draftsman and worked for Shell Oil in Calgary until retirement. Son, Jim Stocco, owned and operated Jimmie’s Supermarket on 3rd Avenue. from 1936 to 1972. Six of her seven grandchildren went to university and obtained degrees in law, education, engineering, social work and computer sciences.
A grandson of Pete Martini, (a shareholder and relative of the Stoccos), Paul Martini, became a world-renowned pairs figure skating star with Barbara Underhill.