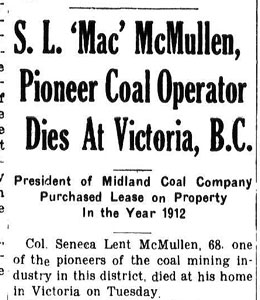 Seneca Lent McMullen was born in Nova Scotia, and came to the valley in the spring of 1912 with his wife Lois.
Immediately he went into the coal mining business. He purchased coal leases, and began developing the Midland Mine. He left the mining venture briefly, according to Valley of the Dinosaurs, and went into the machinery business. It was not long after he was drawn back and took over the control of the Midland Mine in partnership with fellow mining titan Garnet Napier Coyle, who had opened the Newcastle Mine with Jesse Gouge.
The combination of the two was a roadmap for success, and the Midland Mine became one of the greatest producers in the valley, with coal being shipped to all parts of Canada.
While much is made in this day and age of  “just in time” production strategies, this was every day for mine operators. Coal was unstable being stored above ground, as it would crumble, or become a fire hazard. Orders had to be mined, filled and shipped, without holding an inventory. This was big work especially in the good years when the mine was producing 200,000 tons per year.
Simple marketing helped with the mine’s success. According to Valley of the Dinosaurs, McMullen worked on making a quick drying paint to “brand” coal from the Midland Mine. A yellow circle with an “M” became his mark. He also used “chuckers,” small cardboard card with his brand, which were added to loads of small coal so the customer knew where it came from.
Coyle eventually went on to other ventures and McMullen bought out his shares to become the primary owner.
His second mine was the Mercury Mine. He opened it in 1928, and it operated for 11 years with the trade name Mercury, until the original Midland Coal Mine stopped operation in 1939-1940. It then carried the Midland Mine name.
Away from business life, McMullen was a member of the Masonic Lodge and served as president of the Rotary Club. He was a member of the Board of Trade and the Coal Operators Association.
McMullen took great interest in the militia, and became an honorable Colonel of the Calgary Highlanders and the Royal Canadian Army Service Corps.
SL McMullen’s health saw him move to Victoria, but he returned to Calgary to help recruit during the war. He passed away in 1941 in Victoria
His son Sidney retuned from the war and continued management of the Midland Coal Company. In 1954 Amalgamated Coals was formed, by the Midland Coal Company and the Monarch Mine. The Midland Mine closed in 1959. In 1973, Century Coal of Cast Coulee also came into the fold and the entity became known as Charter Coals.
In 1980, land holdings of the Midland Mine were donated to the province for a provincial park, part of which the Royal Tyrrell now sits.
The development of the valley not only took manpower, blood sweat and tears, but also the vision of business to develop the resources. McMullen stands as one of these industry pioneers.