Mine rescue teams have a history of heroism | DrumhellerMail
02062023Mon 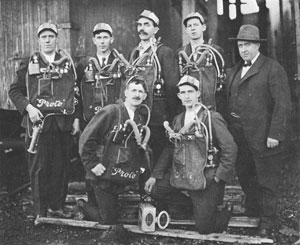 Most of the families that flocked to the Drumheller Valley during the early part of the 20th century came to make a living off the booming coal mining industry. Miners put on their equipment and were thrust in to the dark, cramped confines of the mines.
However, the mines were filled with danger. Toxic gases  could silently subdue miners or flammable fumes and the coal itself could cause an explosion from the smallest of sparks.
Unfortunately the mines were not completely safe, but to aid miners in trouble, the mine rescue teams bravely put their lives on the line to help those in need.
There were many mine rescue teams present in the Drumheller Valley. To be a part of mine rescue there were a couple skills you needed. First, was being certified for first aid. Secondly, you had to give up an evening or Sunday  every week to attend mine rescue practice.
One of the most famous and tragic instances of mine rescue occurred at the Monarch Mine on July 27, 1941, as detailed in the previous installment of Stories of the Century. While attempting to rescue three miners, Harry Crowder succumbed to toxic gases and perished in a valiant attempt to help the Monarch miners.
Another of the biggest tragedies to befall mining in the Valley was the explosion at the Thomas Coal Mine in Nacmine on June 18, 1934.
It was mine rescue, under the supervision of Jack Hooks, who undertook the grisly and dangerous task of investigating what had happened to the miners who were caught in the mine during the blast.
The rescue team found the bodies of Ivor Jones, Alex McLeod, and Hugh McDougall. McDougall and McLeod were closest to the explosion along with William Thomas and Louis Auger who survived. Jones was furthest away.
Jones is a paramount example of the heroism that it took to risk yourself to help your fellow miners.
Jones rushed to the aid of the four others and was twice overcome by gas inhalation. J. Thomson and two other miners who heard the explosion and came to offer aid dragged Jones back to safety each time.
The gas was slowly overtaking the three men who came down to help realized they could not hold out much longer and they retreated before it was too late. Jones persisted and perished in an effort to save his fellow miners.
Not all rescue attempts ended in tragedy and many lives were saved as a result of the heroic efforts of the mine rescue teams.
A bizarre incident occurred at the Atlas #3 in 1951.
A rockfall buried Joseph Gyoerick, 37, who was a timberman at the mine. Rockfalls were not rare in the mining business and mine rescue was called to extricate Gyoerick from his earthen prison.
When mine rescue reached Gyoerick they thought he had perished under the debris and subsequently sent him to the morgue.
The next day was quite a shock to Gyoerick as he found himself in the morgue, alive and confused as to what happened. He did need several back surgeries as a result of the accident, but, thanks to mine rescue, lived until to the age of 76, which just over doubled his lifespan from his first “death”.
Mine rescue could not always make it to the scene of an accident and to the average miner, the nearest co-worker was the closest aid to be found.
Eric Houghton, a motorman at the Atlas Coal Mine was checking on the cars he was hauling, whilst walking on top of them, when he slipped on the hitch of the last car. He fell with his legs over the mine tracks.
Houghton couldn’t move in time to avoid an incoming train and the coal cars ran over his legs and then pinned his legs to his chest which prevented him from breathing.
Abe, the brakeman, and the Fireboss rushed to Houghton’s aid and were able to lift the coal cars away and pull Houghton to safety, although there was still a long road to recovery.
The mines could be dangerous. The records are full of accounts of accidents, rockfalls, and the occasional explosion. It was a blessing that the miners had the heroic mine rescue teams and each other to watch their backs and help when lives were on the line.