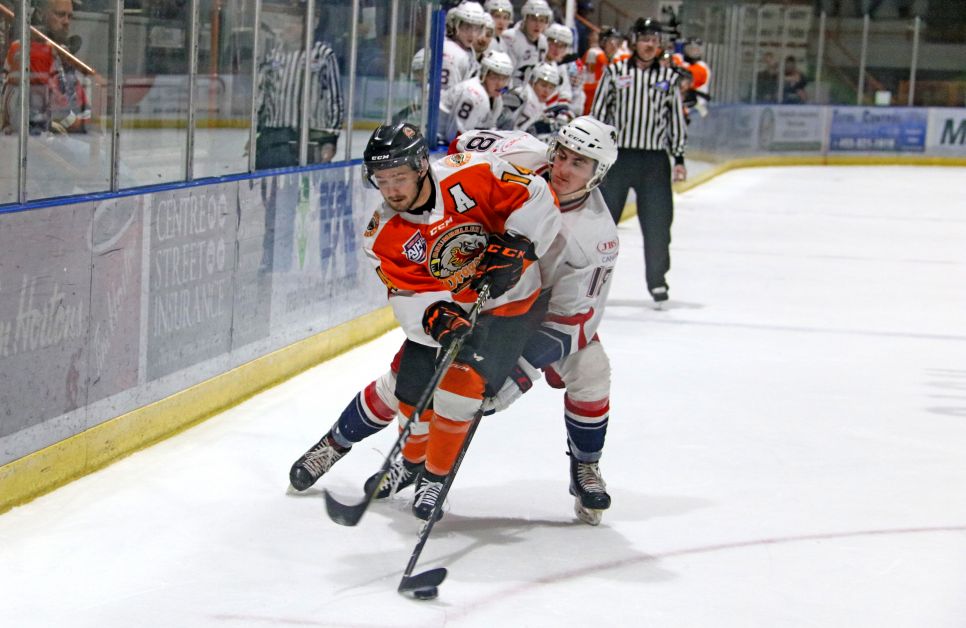 Despite coming off a two game skid against the top Canadian junior team in the Brooks Bandits, the Drumheller Dragons are about as good as they’ve ever been after heading into the break as the franchises’ winningest team at this point in the season.

Drumheller dropped two to Brooks over the weekend after back-to-back games which saw them host the Bandits Friday before heading to Brooks on Saturday. The Dragons went down 4-1 on Friday and 3-1 Saturday. Brooks is the top rated team in all of Canadian junior hockey. The Bandits have been a consistently strong team over the years but this season are tearing up the league, with a record as of Monday of 37-3 with 74 points, ahead of Drumheller’s 51 points.

But head coach Kevin Hasselberg says the loss to team of that caliber just sparks the hyper-competitiveness Drumheller has exhibited so far this season.

“It paints a clear picture of what level we want to get too” he says. “The expectations are high and they never met those expectations. It didn't come without effort but the players will let that set back sit without losing the hope that they can be successful.”

Hasselberg said the records and achievements so far this year “may spark some pride” but “it’s not where our players mindsets are.”

“Our vision and mission is to take things to highest level possible, and we’re away from that, but we’re working daily to maximize our efforts and working with our players to achieve that. The right players are in place to lead the group and the leadership is in place for the organization.”

The Dragons were in Calgary on Tuesday to face the Canucks, but results were not available at press time. Drumheller will host the Bonnyville Pontiacs on Friday, gametime at 7:30 p.m.

The Dragons are up against another second-place team in the north division’s Pontiacs, and Friday’s game will be another test of the team’s mettle. 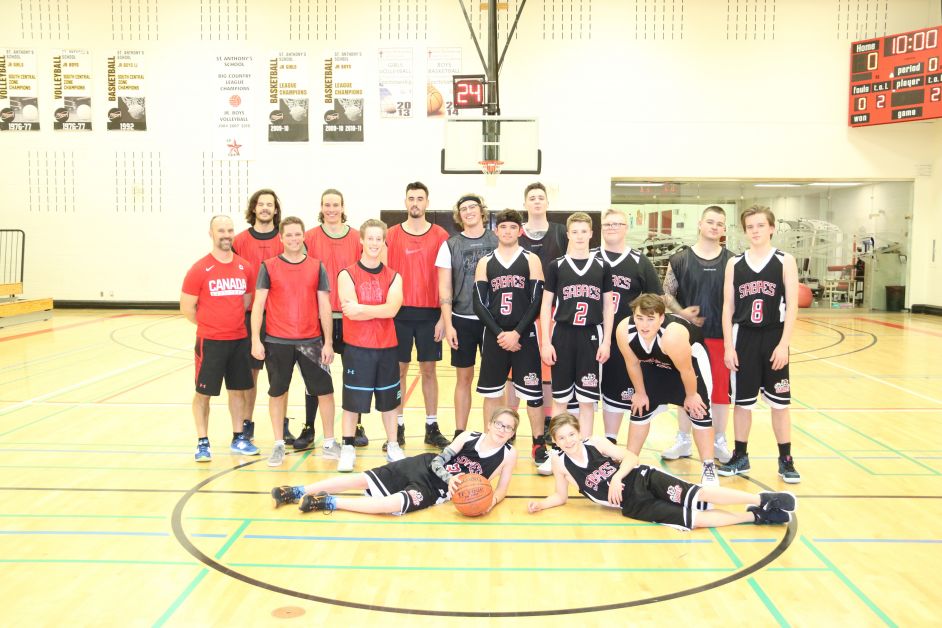 On Thursday, December 20 former athletes from St. Anthony’s School returned to take on current students at the annual Alumni Games. This year, above members of the Junior High Saints girls team, were on the court versus alumni players, while below former players took on the Senior Boys Sabres. While the competition was fierce at times, it is a great opportunity for current students to learn from former students on the court and have fun. 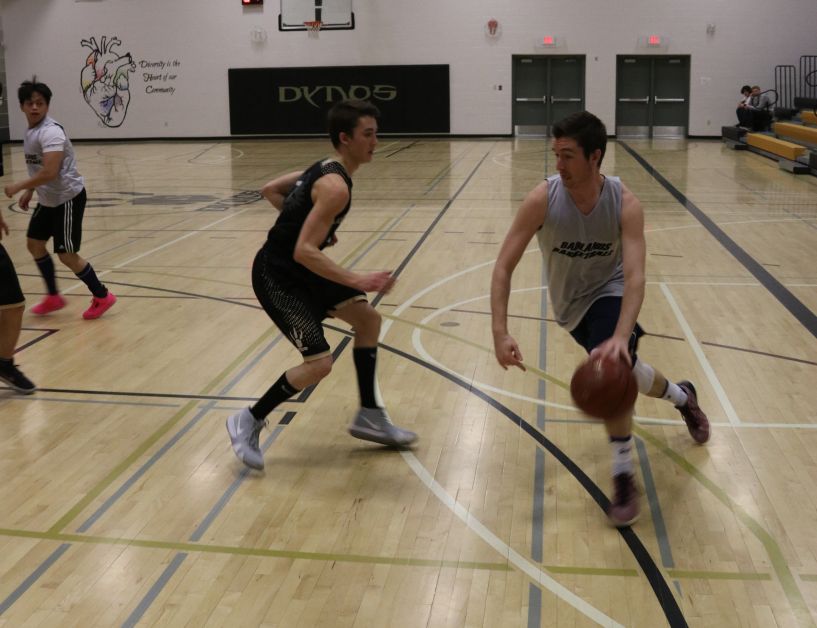 There was great basketball action at DVSS on Friday, December 21 at the annual Basketball Alumni Night. In total it saw over 50 players return to play. In the first game, the DVSS high school boys team defeated the youngest alumni team in overtime. The second game of the night, saw the DVSS senior girls defeat the girls alumni team. The last game of the night saw a matchup of the 2012 team defeat the 09 and older team in another close match. Teacher Jeff Messom said it was another fun night, and great to see alumni return to the court where many had a lot of success in their years as part of the DVSS athletics. 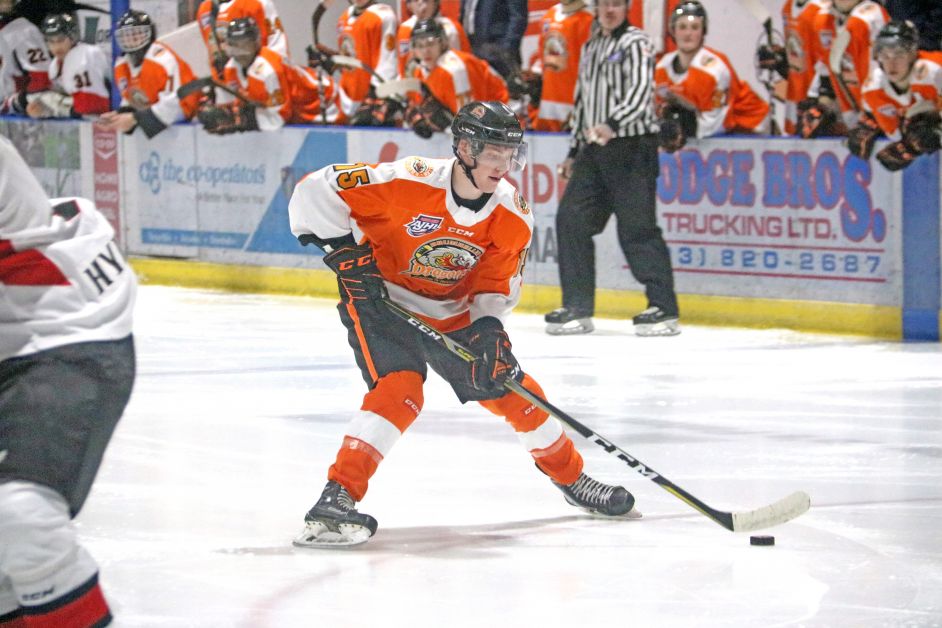 The Drumheller Dragons ended 2018 with a bang, downing the Olds Grizzlys in a convincing fashion.The Grizzlys were in Drumheller on Saturday, December 22, to take on the Dragons in front of 944 fans. This was the last game of the year and the Dragons wasted no time in getting the jump on Olds.Just 40 second into the game Scout Truman gave the Dragons the lead. Five minutes later Derrick Budz scored unassisted on the power play and then with three and half minutes left in the period, Roc Truman scored to put the Dragons up 3-0.The barrage didn’t stop as Alex Rotundo scored on the power play at the 3:43 mark of the second, followed by Braydon Nicholetts at the nine-minute mark. The Grizzlys final got on the scoreboard midway through the period, but Budz scored his second of the game and Brett Edwards followed it up. The Grizzlys scored in the third, but the Dragons went on to a 7-2 win.The Dragons outshot the  Grizzlys 49-31 and four Dragons each had two points The Dragons ended the year in second place in the Viterra AJHL South with a 23-12-2 record behind the dominant Brooks Bandits.The Dragons are back on home ice on January 4, to take on the Bandits.