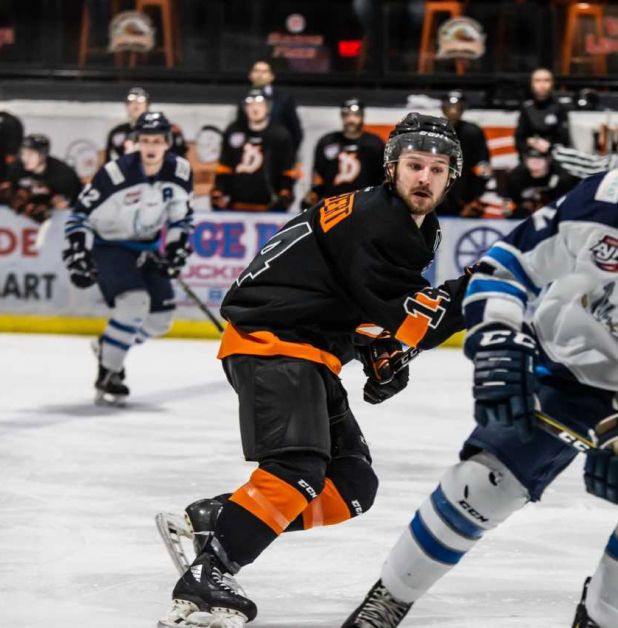 Another Dragon is continuing his career at the post-secondary level and is going to a winner.

Jordan Taupert, 20, has committed to join the Grant MacEwan Griffins for the 2019-2020 season.

“Taupert is truly the greatest of all- time in Dragons colors,” states Coach Kevin Hasselberg. “Jordan has maintained consistency as a scoring threat in the Alberta Junior Hockey League year after year. He has developed his game on and off the ice and graduates not only as a statistical leader but also as an inspirational leader to current and future Dragons. Taupert’s jersey is in a better place now than ever and we couldn’t be more excited for Jordan and his future in College hockey.”

Taupert has played three seasons with the Dragons. He is the second all-time leader for the most games played in the AJHL. As a Dragon, he holds the franchise record for most goals scored, at 68, most assists with 121 and most points with 189. He led the Dragons in scoring in all three years he played.

Taupert joins 24 AJHL alumni, including the former captain of the Dragons Andrew Kartusch and former player Jacob Schofield, with the Griffins as they embark to defend the title again next season. 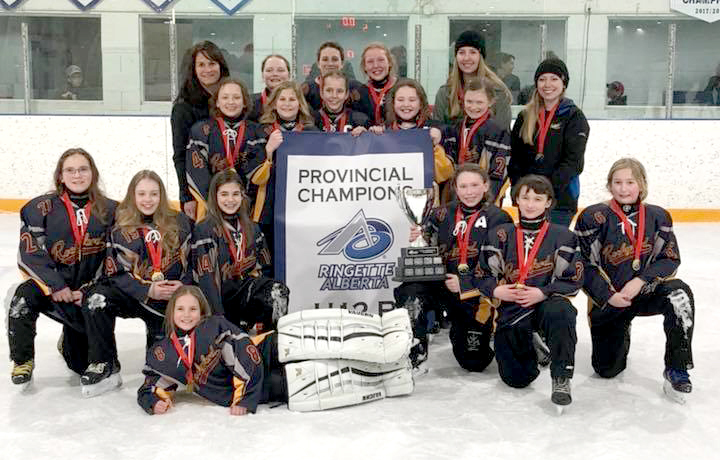 The Rockyford Ringers struck gold becoming the U12B Provincials Champions!
Rockyford hosted the U12B provincials this past weekend March 8-10.  This team of 14 girls from surrounding communities pulled together and worked very hard all year long to grow as a team to achieve this Amazing goal!
The girls finished first in their pool and then captured a win in their crossover game Sunday morning in Hussar 6-5 placing them second overall and taking them to the gold medal game. Now Facing South Calgary Eclipse, an undefeated team, these girls held the lead throughout the game and secured a 5-4 win for a very exciting final!

The Boston Pizza Western GM Bantam Raptors have qualified for the provincial championship tournament after a convincing win over Duchess.

The Bantam Raptors were in action versus Duchess on Sunday, February 24. In this game, they lost 4-3. Because it is a two-game total point series, on Wednesday, February 27 they were back on the ice in Drumheller Memorial Arena to play and came into the game trailing by one goal. The Raptors lit up and won 6-2 overcoming the deficit and qualifying.

Coach Jamie O'Brien is impressed with the team’s focus down the stretch.

“I think the guys are really paying attention and buying into the system,” said O'Brien. “they are implementing our game plan. Every game they try to implement what we give them and they are doing a good job.”

The Provincials are in Vermillion on the weekend of March 14-17.  Coach O'Brien says he has seen a number of the teams throughout the years that are going to be at the Bantam C Championship and expects it to be a strong tournament.

“There are a lot of good teams going there so it will be good competition,” he said.

In the meantime, the Bantam Raptors are in the midst of their league playoffs and are currently in a series versus Kneehill County.

O'Brien adds that he is grateful for the sponsorship from Western GM. He said Doug and BarbLubinskii have shown tremendous support.