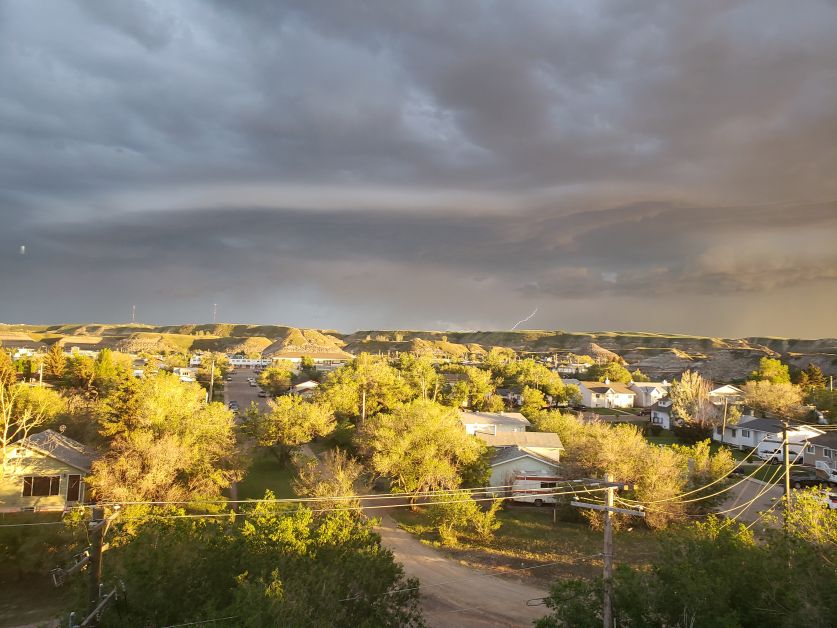 Farmers and ranchers breathed a sigh of relief last week as the skies opened in the area bringing a much-needed rainfall. While it dampened the Drumheller and District 4-H Show and Sale last Monday, it was still very welcome.
The Hemming/Leonhardt place in the Verdant Valley did well. Lynn Hemming tells the Mail they received 1-3/10” and every drop was welcome.
“We could always use some more, it’s a good start to put it that way,” said Hemming, noting it was also very timely.
“A lot of our Canola was not coming up, without some more moisture it was just sitting in the ground.”
Don Ostergard in the Dalum area, who is averse to converting his calculations to SAE, tells the Mail he received about 27 millimetres of rain, which came at a good time.
“It is enough for a while. With that rain we are probably good until the end of the month,” he said. “It was very welcoming for the cereal crop, it was very timely.”
David Webb of King’s Seed Farm in the Three Hills area fared even better with 1-6/10” last week. Like most farmers, they still wish for more.
“Keep ‘er coming,” he said. “Let me spray a few more fields first, but then it can start again.”
“Hopefully we can get a little more at the beginning of the week, and then we can start building some reserves.”
This week started off good again for everyone from farmers to city slickers who don’t want to water their lawns.
Farmers who were facing a prolonged dry spell dating back to last year can breathe a sigh of relief, but at the same time, their livelihood leans heavily on Mother Nature.
“I spent my whole life waiting for it to rain,” said Ostergard. 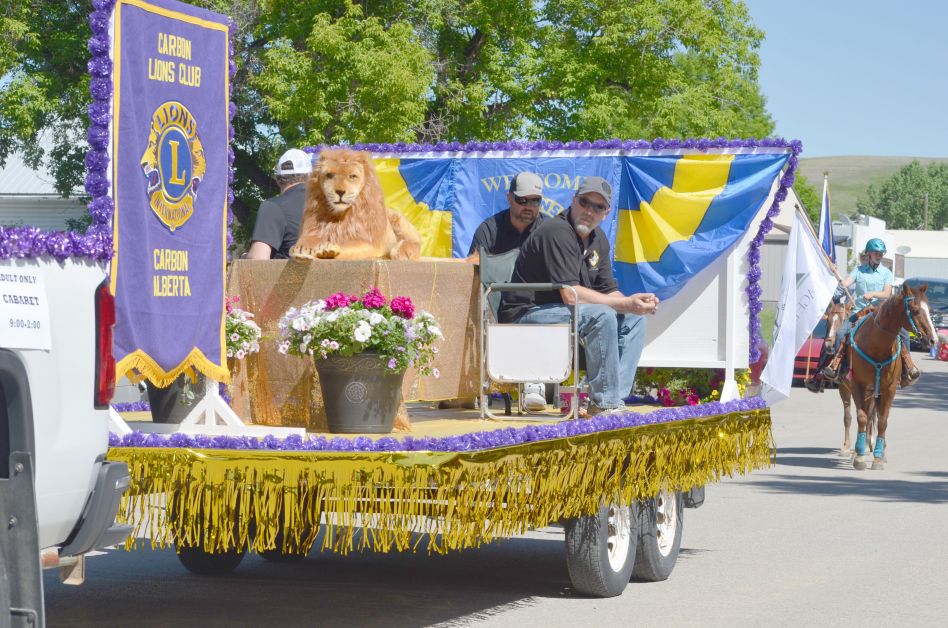 Carbon Lions Sports Days weekend was extra special this year as the local Carbon Lions celebrated their 75 anniversary. Festivities kicked off with the annual parade honouring both the Carbon Lions and local Carbon Legion’s milestone anniversary on Saturday, June 11. Among the participants in the parade were members of the Carbons Lions Club, the Swalwell 4-H Club, and the Carbon Fire Department. Saturday evening saw the Carbon Community Centre filled with attendees for the Lions BBQ beef supper, and the adults only cabaret. 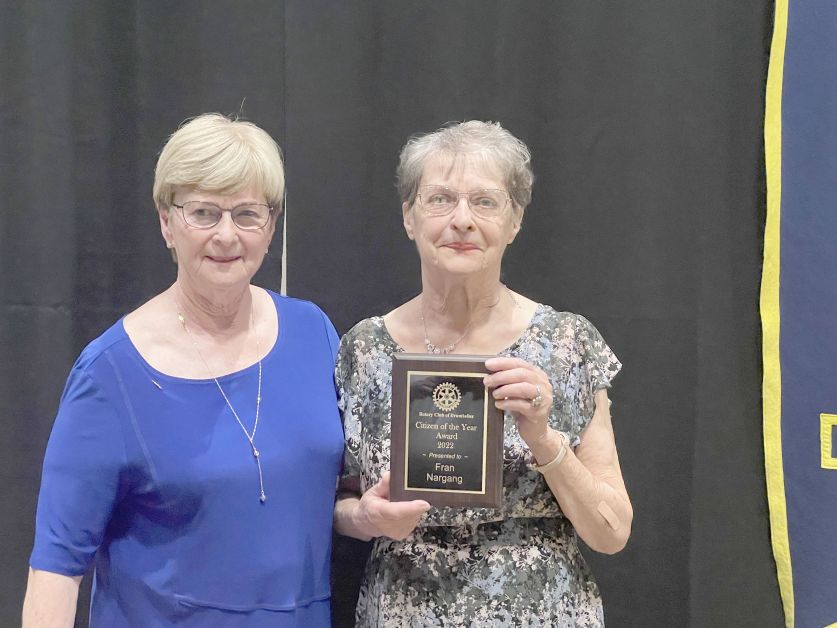 Long-time restaurateur Fran Nargang is the 2022 Rotary Club Citizen of the Year.
The best and the brightest in community and business leaders gathered at the Badlands Community Facility for Celebration of Excellence.
The annual event co-sponsored by the Drumheller and District Chamber of Commerce, Travel Drumheller, the Town of Drumheller, and the Rotary Club presented awards of excellence to community members on Thursday, June 9.
Nargang is the owner and operator of The Old Grouch’s Restaurant, which she founded with her late husband Garry. It is an eclectic addition to the community with a strong local clientele, as well as visitors who come for the home style cooking.
For 15 years, The Old Grouch has been host to the STARS Jam. This is a fundraiser for STARS air ambulance, a charity near and dear to her heart.
This was started after her grandson was hit by a car and STARS saved his life. In the 15 years she has held the event, it has raised over $100,000.
The Old Grouch has also been the launching point for musicians to get their careers started.
Known for her outspokenness, upon receiving her award, she simply said, “I’m usually not short of words, but I am tonight.” 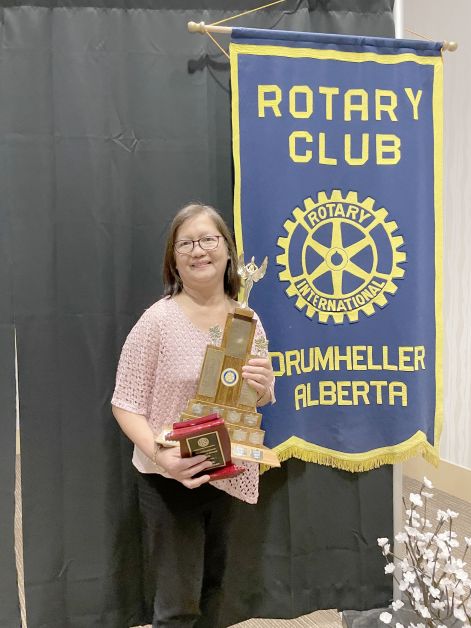 The Rotary Club’s Most Courteous Employee Award was given to Emma de Guzman. She is a long-time employee of Subway in Drumheller and has taken the time to get to know her customers. She is also an employee of Dollarama.
The finalist was Sue Aisley of Riverside Medical. 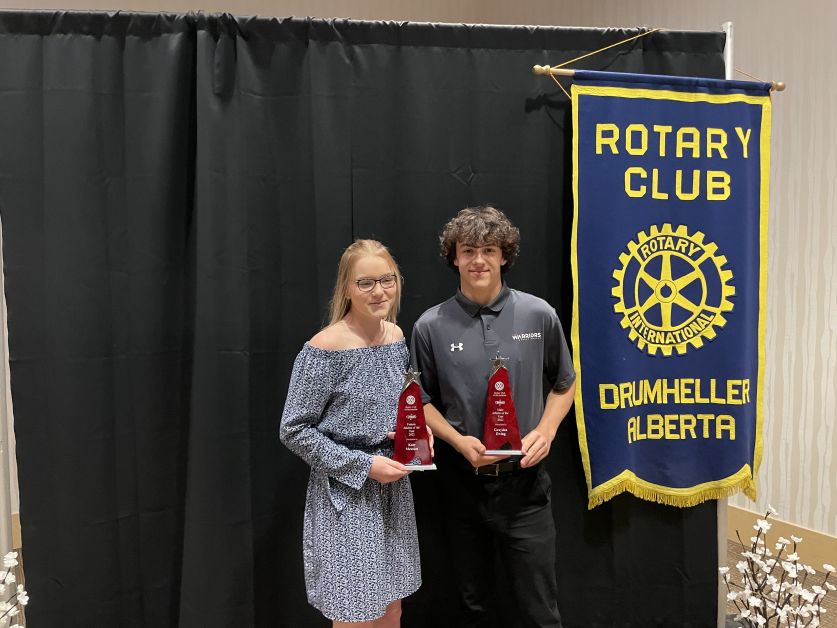 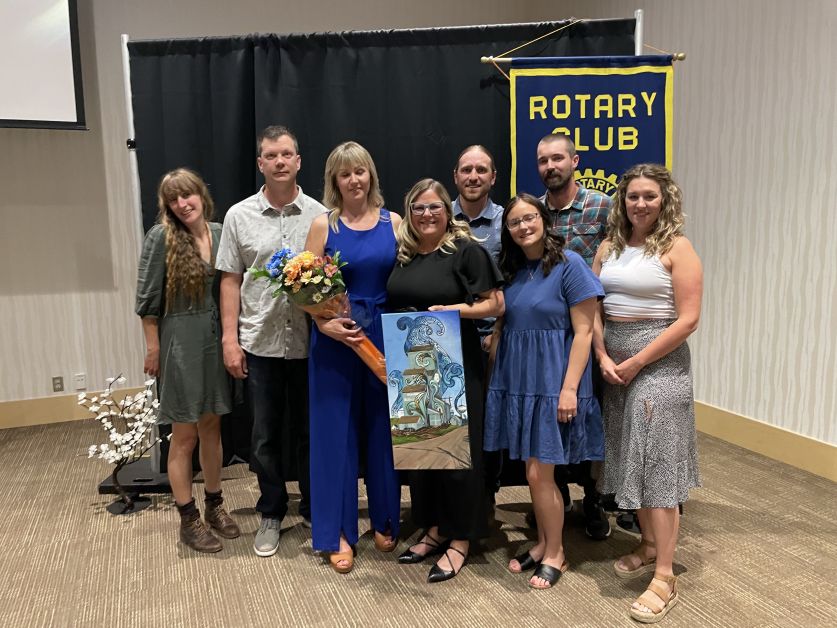 Travel Drumheller presented the Tourism Excellence Award to Valley Brewing. This award is for a business that reflects Travel Drumheller’s vision of Drumheller as an Iconic Destination.
The runner-up was Badlands Photography.

The Town of Drumheller Family and Community Support Services (FCSS) presented its Youth Leaders of Tomorrow awards. These are for students who have made outstanding contributions to their community through volunteerism. 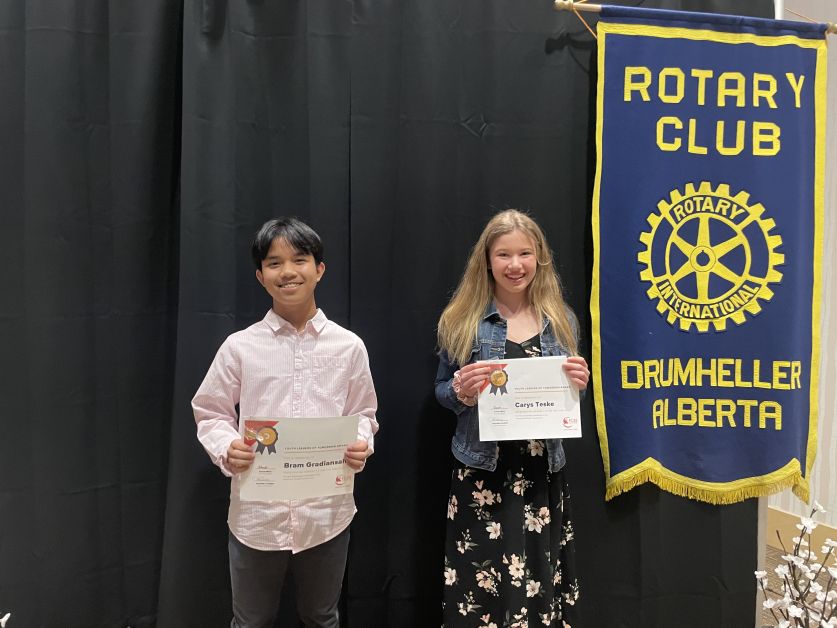 In the Junior High category, Carys Teske and Bram Gradiansah of DVSS received the awards. 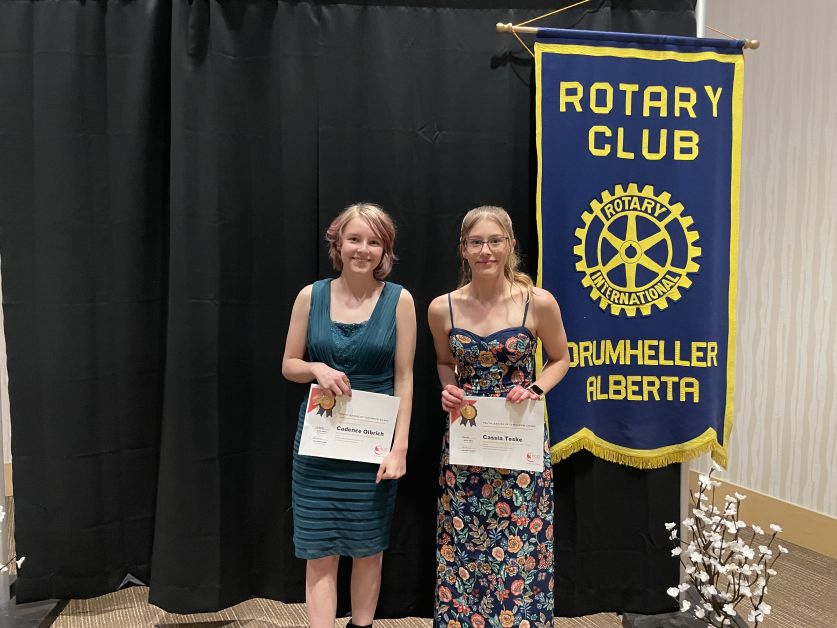 At the High school level, Cadence Olbrich of St. Anthony’s and Cassia Teske of DVSS were presented the awards.
The Chamber of Commerce also presented its annual awards. 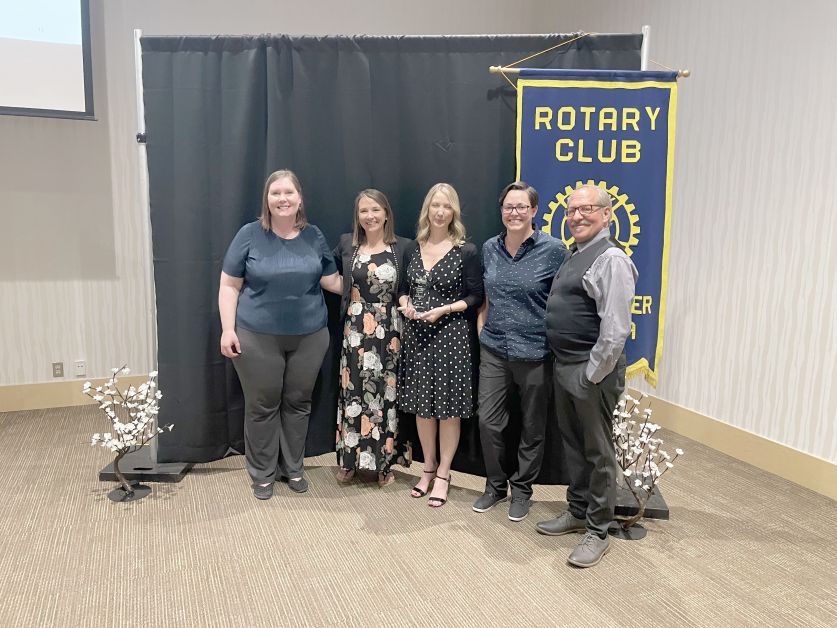 MH Enterprises is the recipient of the Community Builder Award. 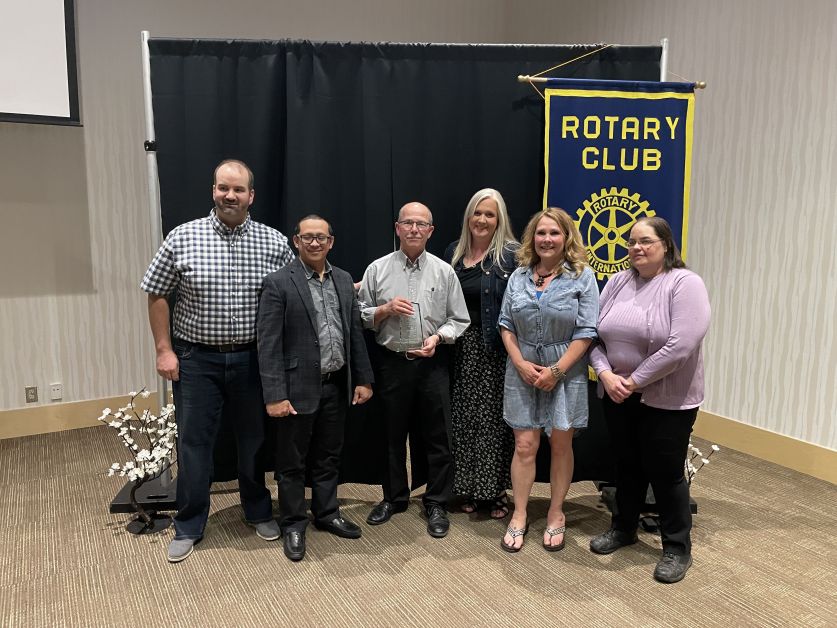 Freson Bros was selected as the Employer of Choice. 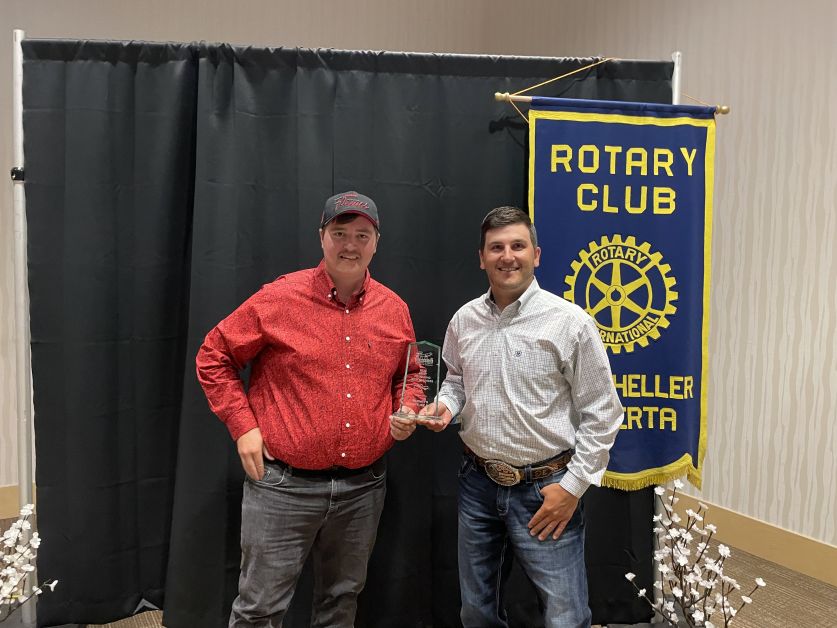 Barney’s Adventure Park was awarded the Most Promising New Business. 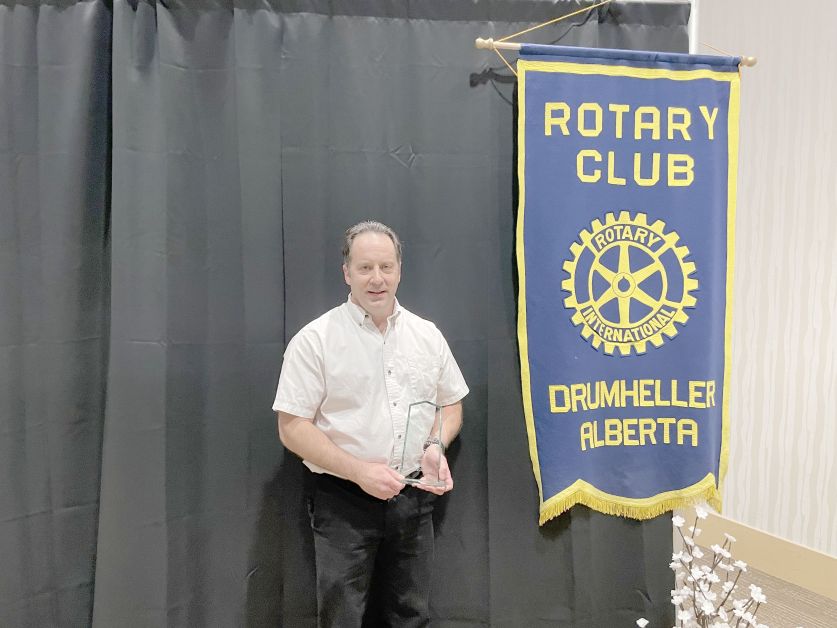 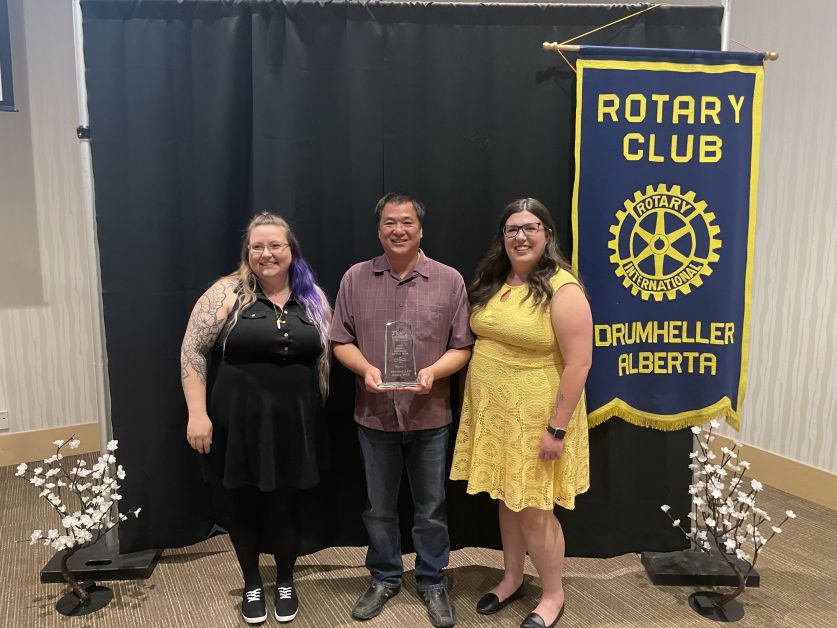 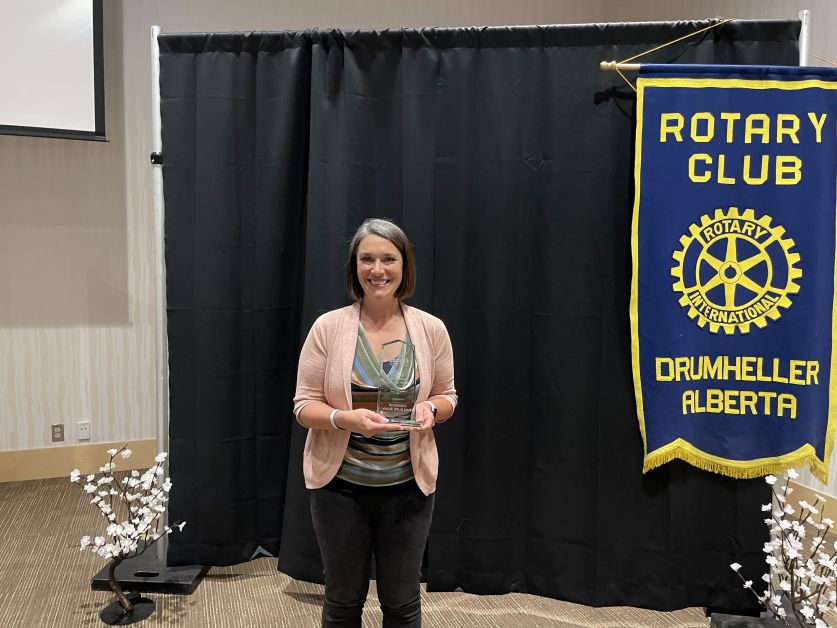