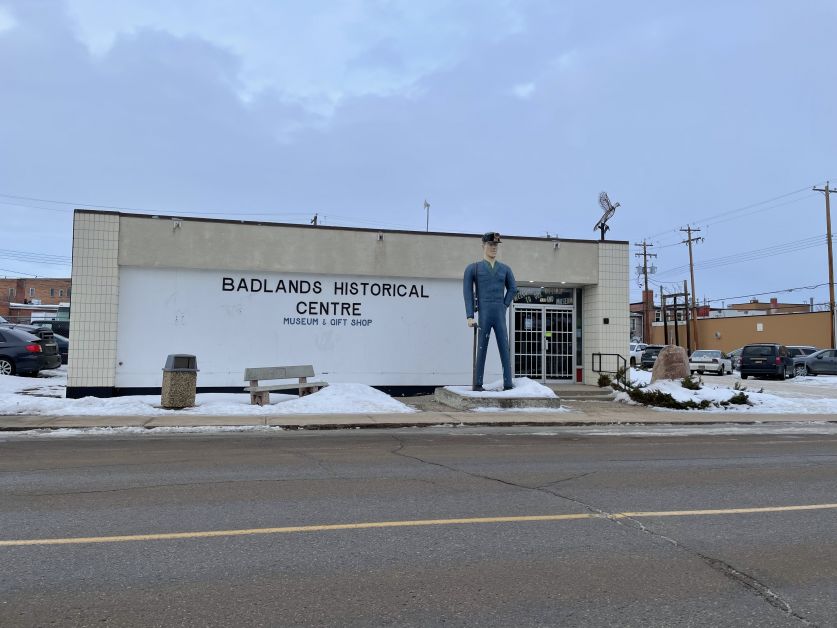 Kneehill County council has approved a request from the Drumheller Badlands Historical Society for a $5,000 donation to help support repairs to the roof of its building during the regular Tuesday, January 10 council meeting.
The funding request initially came before council for consideration in December and Chief Administrative Officer (CAO) Mike Haugen explained the society was proposing the facility could be used by youth programs, such as 4-H Clubs, as a rally point; however, following discussions council moved to table the request pending additional information from the society.
“I’m for supporting things, but it is a slippery slope because we have four museums in our county alone that may request to have something repaired on their facility,” stated Division 4 Councillor Carrie Fobes during the December meeting.
Following the request for more information, Badlands Historical Centre President Louise Henrickson indicated in a letter the society itself owns the facility, and is governed by a board of six active members who were newly appointed in June 2022.
Ms. Henrickson also noted the society has faced some challenges over the past few years due to a break in, damage to a skylight, and the COVID-19 pandemic. The last fundraising events held by the society managed to raise $3,000, and while the society has a casino planned for 2024 it is not anticipated the funds raised from this will be permitted to be used towards the roof repairs.
It was indicated the society has also applied to several different grants but has not been successful in these endeavours to date.
The Badlands Historical Centre has been in operation since 1957 and its new board is looking to diversify and “(breathe) new life into the museum” and continue sharing the history of Drumheller and the surrounding areas through its artifact collection.
Deputy Reeve Ken King shared, while the society is interested in utilizing the facility as a rally point for youth programs, he also saw value in approving the donation request based on preserving and protecting the artifact collection housed at the facility.
This sentiment was echoed by Reeve Jerry Wittstock, and Division 6 Councillor Wade Christie added the fact the board is trying to encourage participation in the society by youth had caught his attention due to challenges faced in his own division.
Council approved the $5,000 donation request with four in favour and two opposed. 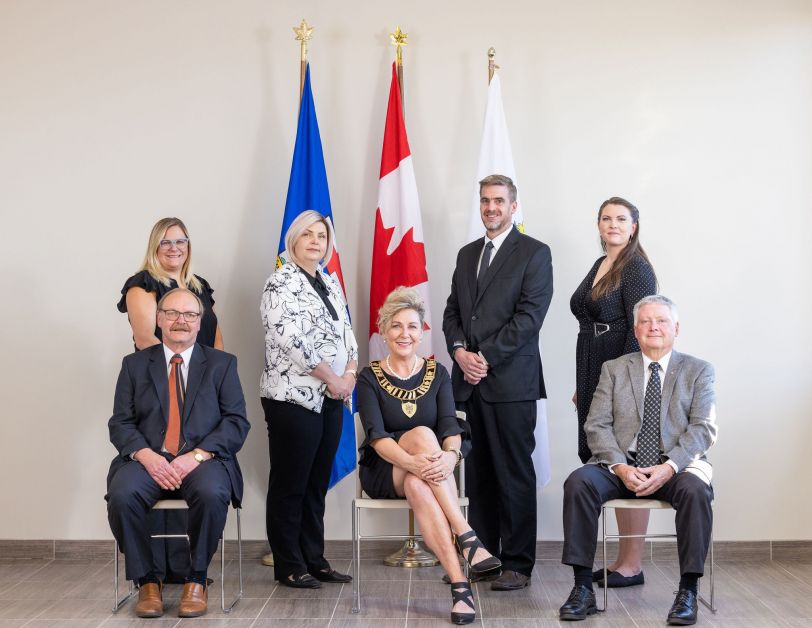 The Town of Drumheller has accomplished a lot over 2022, from taking first steps on some much-anticipated projects and clearing up long-derelict buildings, to the successful lobbying for additional funding to support additional projects, and is looking ahead to 2023.
“I’m so proud of the work the previous council started, and the wonderful work this council has taken so far to carry that work forward,” says Drumheller Mayor Heather Colberg. “I cannot thank administration, public works, and all departments for following through on all the work pushed through by council.”
Council announced in March it had struck a deal with CN Rail to lease former rail right-of-ways-from Midland to Rosedale and Wayne-to develop a walking and active pedestrian transportation trail network throughout the Drumheller Valley.
This was a deal nearly a decade in the making, and Mayor Colberg says she is grateful for the work Chief Administrative Officer (CAO) Darryl Drohomerski and Colin Kloot of Kloot and Associates put into getting the deal signed.
Since March, the Town has moved quickly on this project. Paving on the first section of this trail, between the intersections of Highway 9 and 10 and Highway 10 and 19 Street East, began in August and was completed by September, providing a safe walking path from the main highway intersection to Walmart.
At the end of September the Rails to Trails fundraising task force was formed, which includes members of council and community members passionate about the project. The task force raised over $30,000 at a fundraiser dinner and silent auction event at the beginning of December; it has also received $25,000 from the Drumheller Valley Half Marathon to sponsor one of six stations along the trail, $35,000 from Community Futures Big Country to sponsor the Main Station at the edge of downtown Drumheller, and $125,000 from the families of Darrell and Dean Kohut and Heather and Kelly Colberg to sponsor the Midland Bridge-which has been renamed Kohut Crossing.
The Town unveiled a new alternative end-of-life option in June with the development of its scatter gardens at the Drumheller Municipal Cemetery. These gardens offer a place for families to scatter the cremated remains of loved ones, a memorial wall to place a memorial plaque, and a pergola to offer a place to gather and reminisce. While this is still a new concept for the valley, Mayor Colberg says it is an economically feasible end of life alternative, which can help to expand the life of the cemetery for several years.
Another long-awaited project was the demolition of several derelict buildings within the community.
Mayor Colberg says demolition of the buildings, most of which had been uncared for and neglected for many
years, will not only help clean up the community but will also allow the Town an opportunity to increase its tax base through potential future development on these sites.
The old consortium building at the intersection of 6 Avenue East and 5 Street East was torn down in August, and the old Drumheller Hospital on Riverside Drive East soon followed in November. Other properties, including the old Nacmine Hotel and the original 500 wing of the Sunshine Lodge, were also demolished.
In May, Mayor Colberg and CAO Drohomerski lobbied the provincial government for additional funding due to rising costs on the flood mitigation and airport lighting projects.
Repaving and resurfacing of the airport runway was approved in April, and work completed over a six-week period in June and July. However, the lighting portion of the project was put on hold due to increased costs over $200,000 above the approved budget; the lighting project is expected to be completed by mid-January 2023.
Mayor Colberg says the Town has not heard back from the provincial government on the additional funding for the flood mitigation project. However, she says, as the original funding was based on a flow rate of 1,640 cubic metres per second (cm/s), and the designed flow rate was increased by the province to 1,850 cm/s--increasing the height needed for the structures--lobbying efforts will continue.
“We are committed to protecting this community,” she says, noting the Town has been fortunate to receive funding support from both the federal and provincial governments.
So far, work on four berm projects in Midland, Newcastle, North Drumheller Grove Plaza (near the Travelodge), and Willow Estates is underway. These projects are currently on hold over the winter, with work anticipated to continue in spring 2023.
The Town is also repurposing some of the trees which were removed from these berm sites to facilitate construction.
Artist Marina Cole of Chainsaw Spirit in Irvine, about 280 kilometres southeast of Drumheller near the Saskatchewan border, spent time carving a unique dinosaur shaped bench from one of these trees over the Alberta Culture Days weekend in September; the bench is currently on display at the Badlands Community Facility (BCF).
Mayor Colberg says there are plans to have another tree carving event in May 2023 with more carvers on hand to carve more benches which will be placed throughout the community. 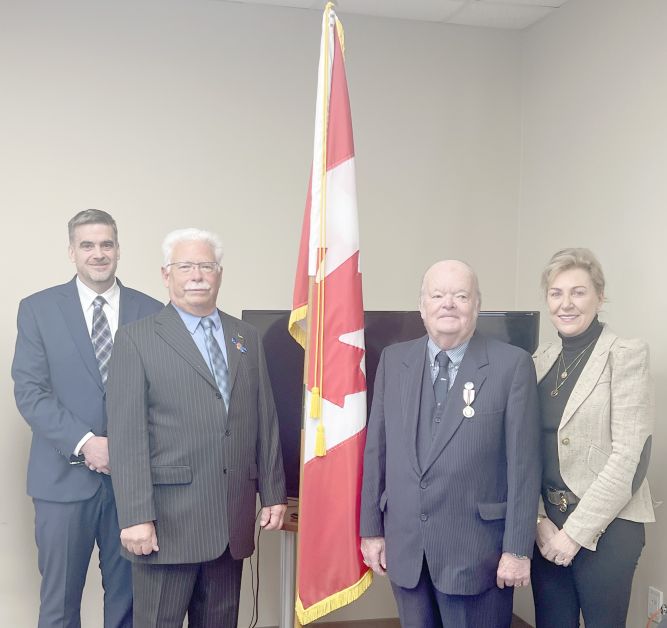 Drumheller resident Bill Wulff has spent decades volunteering his time assisting seniors in the community file their tax returns and access benefits. On Thursday, January 19 he was presented with the Queen Elizabeth II Platinum Jubilee Award medal in recognition for his many years of public service within the Drumheller community and surrounding regions. Along with helping seniors with their tax returns, Mr. Wulff has also been involved with several local organizations, has given his time to help organize the annual Town of Drumheller Canada Day fireworks, and has spent the last nearly two years assisting the Village of Delia in the role of acting interim Chief Administrative Officer (CAO). Mr. Wulff says he was “extremely surprised” to find out about his nomination for the award, and feels “very odd, and very honoured” to be a recipient. He adds with technology evolving at a rapid pace it has left many who are less computer savvy at a disadvantage trying to navigate “the maze of government forms” and says volunteerism is something he believes strongly in, and encourages anyone with a skillset or ability which can be shared to do so. Mr. Wulff estimates he completes some 400 tax returns each year for seniors and says one day he hopes to be “on the receiving end.” At the presentation were (l-r) Community Futures Big Country Chair and Drumheller Councillor Patrick Kolafa, Bill Wulff, Delia Mayor David Sisley, and Drumheller Mayor Heather Colberg.