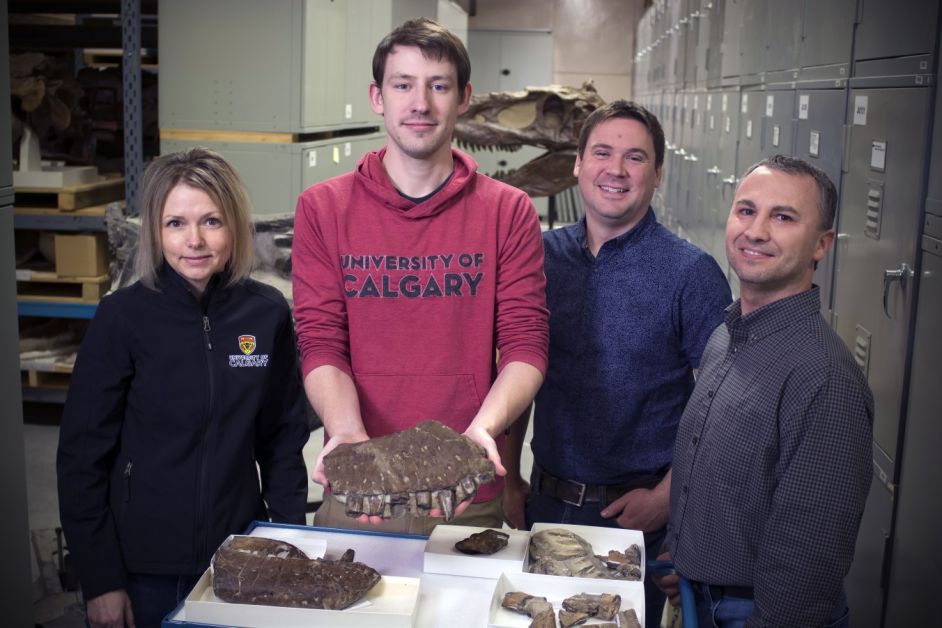 The Royal Tyrrell Museum announced the first discovery of a new species of tyrannosaur in 50 years and it was sitting in one of their cabinets for almost a decade.
The Museum and the University of Calgary published their findings in the journal Cretaceous Research.
“We are thrilled to announce the first new species of tyrannosaur to be discovered in Canada in 50 years,” said Dr. François Therrien, Curator of Dinosaur Palaeoecology at the Royal Tyrrell Museum.
Farmer and palaeontology enthusiast John De Groot while hiking in Hays, Alberta in 2010 discovered the specimen.
The fossils were filed away at the Tyrrell until the spring of 2019 when University of Calgary Ph.D. student, and lead author of the study, Jared Voris took another look at the specimen.
Named Thanatotheristes degrootorum, a name inspired by Thanatos (Greek god of death) and theristes (one who reaps or harvests), is the oldest tyrannosaur species ever found in Canada.
“Thanatotheristes can be distinguished from all other tyrannosaurs by numerous characteristics of the skull, but the most prominent are vertical ridges that run the length of the upper jaw,” said Jared Voris.
According to a release, at roughly 79.5 million years old, Thanatotheristes is 2.5 million years older than its closest relative. There are only four other tyrannosaurs known from Canada: Daspletosaurus, Gorgosaurus, Albertosaurus, and Tyrannosaurus.
Most dinosaur species from Alberta date from between 77 – 66 million years old. There are only two other dinosaurs known from Alberta from the same time period as Thanatotheristes: a dome-headed dinosaur (Colepiocephale) and a horned dinosaur (Xenoceratops),
“This discovery is significant because it fills in a gap in our understanding of tyrannosaur evolution,” said Dr. Therrien. Thanatotheristes provides scientists with insights into the tyrannosaur family tree and shows that tyrannosaurs from the Cretaceous of Alberta were more diverse than previously known.