Dragons goalie Curtis Skip has been selected for the Canada West Selection Camp for the 2013 World Junior A Challenge. 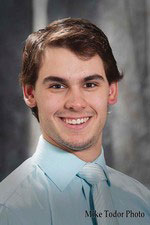 The 1994-born goalie came to the Drumheller Dragons this season  and has slipped into the starting role. In 10 games, he has .915 save per cent.
“That is a big honour,” said Dragons coach Brian Curran.
Before coming to Drumheller Skip played two seasons playing for his hometown Grande Prairie Storm.
This is his second time he has been selected for the camp.  Curran says there are a number of factors that set him apart as a player.
“It is his ability, his record, his wins and losses, and they know his character,” said Curran. “It is not only his ability to be a very good goal tender, it is his character, work ethic, practice habits… what sets him  apart is his will to be the best.”
The 2013 World Junior A Challenge is in Nova Scotia and teams from Canada; east and west, Russia,  The United States, the Czech Republic and Switzerland will be competing.  It runs from November 2 to November. 10.
The selection camp runs October 26 to 30 and 66 players are invited. The camp will be at Canada Olympic Park in Calgary. Jason McKee, coach of the Spruce Grove Saints is head coach.
“There is tremendous talent in Canada’s five western Junior A leagues, and it was a challenge to select only 66 to invite,” McKee said. “We’re excited for the potential of this group, and we can’t wait to get on the ice in Calgary and choose the 22 who will wear the red and white in Yarmouth.”
Coach Curran is hopeful that Skip will be able to make the selection camp. At last Wednesday’s game, he was injured.
“Hopefully it does work out. The effort that you see and what he does everyday and how he performs is a honour just to be invited to the camp.”
“Not only is it great for him as a player and teammate, but it helps to see that he is a part of your team and the organization is recognized.”