It was a tough weekend for the Drumheller Dragons. After getting a 2-0 start in the regular season two weeks ago, the Dragons were dealt two losses to bring them to a 2-2 record. 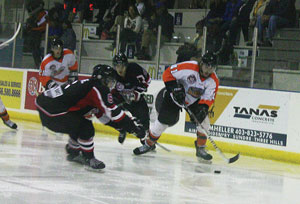 Drumheller Dragons rookie Alex Elliot, #41, attempts to slip past the defence of the Camrose Kodiaks on Saturday’s home opener. The Dragons, after going 2-0 the previous weekend, lost back-to-back against the Brooks Bandits on Friday and the Kodiaks the following evening. The Dragons are at home again this weekend.

On Friday, September 13, the Dragons were in Brooks where they lost 5-1 to the reigning AJHL champions, the Bandits.
Less than a minute into the game, the Bandits got on the scoreboard and had a 1-0 lead over the Dragons. The Bandits would make it 2-0 with a power play goal with 13 seconds left in the first.
The second period began with the Bandits firmly in control, scoring two goals, but the Dragons, thanks to Jesse Zaharichuk, were able to get on their skates and score a powerplay goal at 14:37 to make it 4-1. The Bandits scored their fifth and final goal halfway through the third.
Despite the loss, head coach and general manager Brian Curran felt the score did not reflect how well the Dragons played.
“I thought in the Brooks game we played a very good first period, but unfortunately we ended up being down 2-0. I thought the work ethic was there. At times we played very well. They deserved the win, but the score was not indicative of how we played,” said Curran.
The following night, the Dragons were back in front of a packed Drumheller Memorial Arena for their home opener against the Camrose Kodiaks.
The Kodiaks came out strong and defeated the Dragons 6-3.
The Dragons appeared nervous on the ice.
“It was a real tough game. We down played it (the home opener) big time to the boys, so they wouldn’t get too nervous. Unfortunately when they started you could see they were pretty nervous,” said Curran.
The Kodiaks built momentum early and scored a huge  morale boosting first goal while shorthanded. They followed up with two more goals in the first.
Joey Ratts, off of Dakota Zaharichuk and Dallas Smith, scored for the Dragons before the period was out to make it 3-1 by the first intermission.
Christopher Rauckman, with help from Mitchell Cook and Curtis Skip brought the score to 3-2 early in the second, but the Kodiaks regained their two goal lead soon after.
By the third period, the Dragons were down 4-2.
The Kodiaks took advantage of a powerplay opportunity mid way through the third and scored at even strength a few minutes later to make it 6-2. Hunter Mills, off a pass from Tyler Kerner, scored with just over three minutes in the period, making the final score 6-3.
“There were some positive things in the game, but they (Camrose) were able to capitalize on the negatives,” said Curran.
“We’re a young team, but we need to get better performances from our leaders and older players. Some played very well and others were average. We can’t afford average. If this were happening a month from now, we would have some serious problems.”
The Dragons return to action this weekend at home. On Saturday, starting at 7 p.m., they host the Calgary Mustangs. Then, on Sunday at 1 p.m., they host the Bandits.
“We’ll go out and have some good practices this week and I know we’ll be a different team come Saturday,” said Curran.