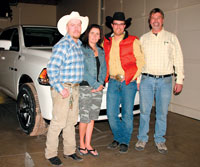 The Drumheller Stampede and Ag Society are impressed with the results of the annual tarp auction, taking in $108,250. WPCA Dodge Pro Tour chuckwagon drivers Colt Cosgrave, Tim Haroldson and Darcy Flad joined in the bidding action at the Stampede Barn Tuesday night, April 7, as bidders from across the province opened their wallets at the satellite auction. “As far as I am concerned, it was a success,” said Ag Society vice president Larry Duxbury. “We didn’t go down a whole lot, even with the economy. We also picked up additional local sponsors.”
While this total is down from the previous season by about $6,000, the Drumheller auction faired well compared to many across the province. Overall totals were down across the board, with the Battle of the North in Dawson Creek taking the biggest hit of over $40,000. Bonnyville, in its second year saw an increase of $12,500 in its totals. The WPCA says the economy may have played a role in the lower totals. “In a year of economic uncertainty, the price for chuckwagon tarps on the professional chuckwagon circuit were down 11 per cent over the same shows in 2008. While 7 of the 8 shows sold were down over their 2008 totals,” stated a release. The totals for the Dino Derby are sure to rise as five tarps were not purchased, and it is now the drivers’ responsibility to find a sponsor. The Ag Society is encouraged by the results. This year five tarps were sold to local buyers, up from four last year. The Bandidos team purchased Cliff Cunningham’s tarp for the Dino Derby. The Drumheller and District Chamber of Commerce bought Tim Haroldson’s tarp, McLean Construction bought Barry Hodgson’s tarp, the Track Builders team purchased Cody Ridsdale’s tarp and Dinosaur RV Park picked up Hand Hills chuckwagon pilot Colt Cosgrave’s canvas. This year the WPCA changed its auction format back to offering a satellite feed to trackside venues, and while the local contingent of buyers was up, the turn out at Dinosaur Downs was modest. “We would have liked to have fed more people. Whether they wanted to buy a tarp or not, we still would have like to have seen more, and show them what we have done. We are proud of what we accomplished over the last year,” said Duxbury. The average bid came in at just over $3,000, with a high bid of $9,000 and a low bid of $1,750. The Richard Cosgrave Memorial Dino Derby is set for July 24 to 26 at Dinosaur Downs.