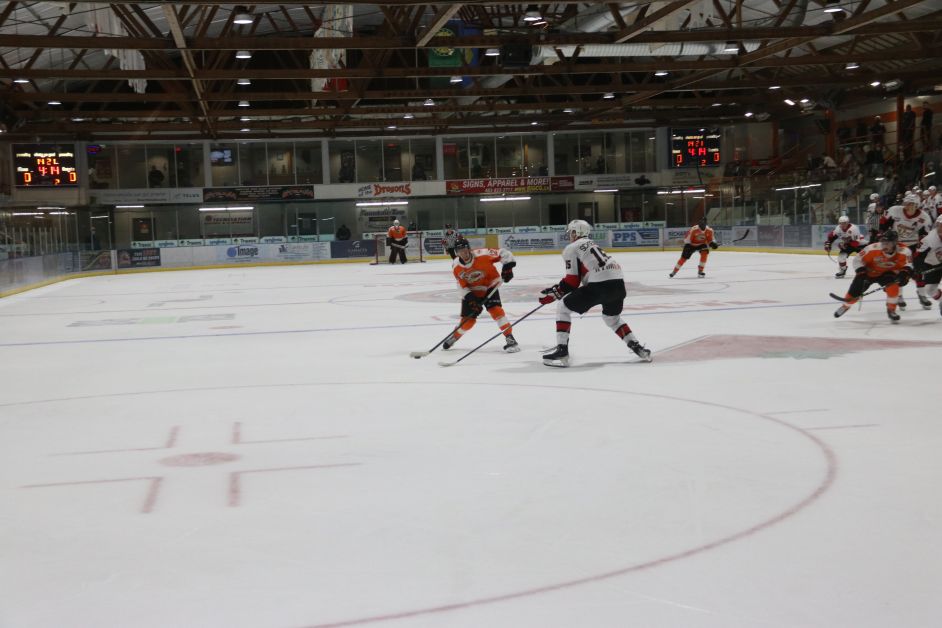 While it is still early in the season, the Dragons are holding on to the second spot in the Viterra AJHL South Division, after a win and a loss over the weekend.
The Dragons hosted the Camrose Kodiaks on Friday, September 24 at Drumheller Memorial Arena. The Kodiaks outshot the Dragons 29-23, and the Dragons only mustered two shots to the Kodiak’s12 in the second period. Camrose mustered the only goal of the game at the 8:32 mark of the third period, to win 1-0.
The Dragons then headed to Okotoks to take on the Oilers on Saturday, September 25. The Dragons got an early start, outshooting the Oilers 10-3 in the first period. Sam Lozinski scored on the powerplay, 3:12 into the game.
Lozinski followed it up early in the second period to put the Dragons up by two. Grayson Dietrich added one more to end the second period up 3-0.
In the third period, Sam Simard made it 4-0 before the Oilers made it onto the scoreboard. Hayden Prosofsky added another for the Dragons, but the Oilers added two more. In the end, it wasn’t enough as the Dragons won 5-3. Lozinski’s two goals earned him the star of the game for the Dragons.
This Thursday, September 30, the Dragons will start the AJHL Showcase in Brooks versus the Grande Prairie Storm, and then play the Sherwood Park Crusaders on Sunday, October 3.