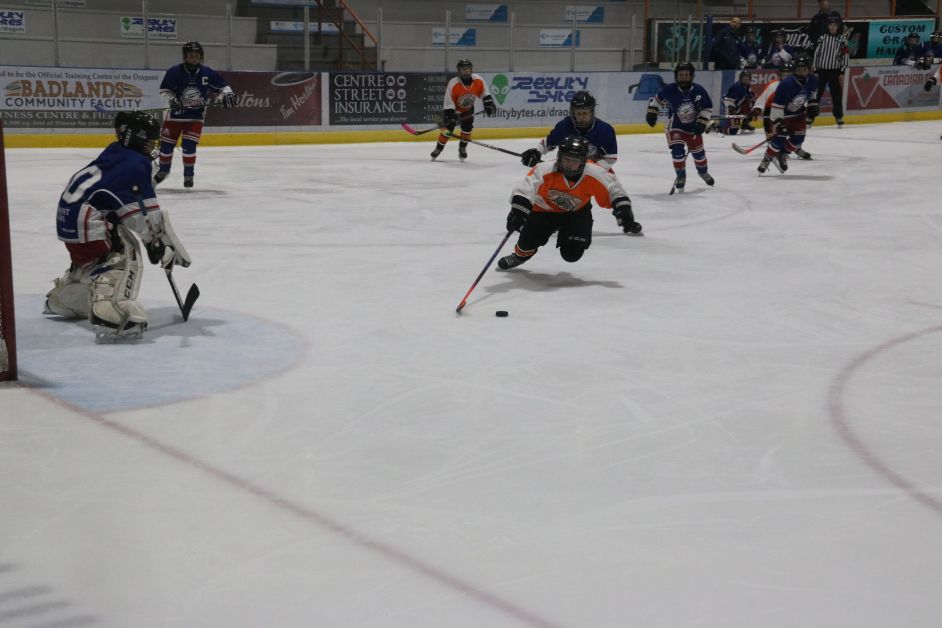 Drumheller Minor Hockey Association selected its new board at its AGM.
The Association held its AGM virtually on Wednesday, May 5, via Zoom. Keith Poole will be serving as president, and vice presidents are Ryan Bitz and Scott Freilinger. The league representative is Kevin Hunter, and the secretary is Dee Chambers. The registrar is Stephanie MacDermid, special events coordinator is Krystal Sharpe, and the equipment manager is Kim Moulton. New to the board is Blair Christensen as director of player development, and Mitch Goldamer as treasurer.
Newly appointed president Poole says it is a strong board.
“We have a great board with lots of talent and lots of people who are going to dive right in. I’m pleased with the outcome,” said Poole.
He is also looking forward to hockey returning, whatever that might be.
“We’re hoping to be back to some normalcy by September, we have to take the approach as one step at a time, and whatever AHS rolls out, we have to adapt and put something together,” said Poole. “Everyone is optimistic we’ll be doing something by September.”
He says they will be holding registrations for the coming season in the near future, and expect numbers will still be healthy.
“We still have a good core group of kids that want to play, and if there is a will, we are going to let them play,” he said.
It was a tough season for hockey players, but Drumheller Minor Hockey did get a few opportunities to improve their skills and learn the game. When most Minor Hockey Associations shut down earlier this year, as many were losing their ice, Drumheller Minor Hockey seized the opportunity. Players that wished to end the season were refunded, but those who wanted to continue on the ice were able to register for a developmental season.
They adhered to all the protocols and were able to work out in small cohorts.
“We had coaches in each group that were willing to coach, so it worked out. It was good development for the kids, and another way to keep sanity really,” said Poole.
When the season comes back around, while players might have an edge over other associations who completely shut down, for Poole, it is more about the players’ well-being.
“It is more about the kids’ mind development. When they are doing it, whether it’s hockey, baseball, or football, as long as they are active, it keeps up all those motor skills. My kid is definitely a better kid when he is playing sports.”