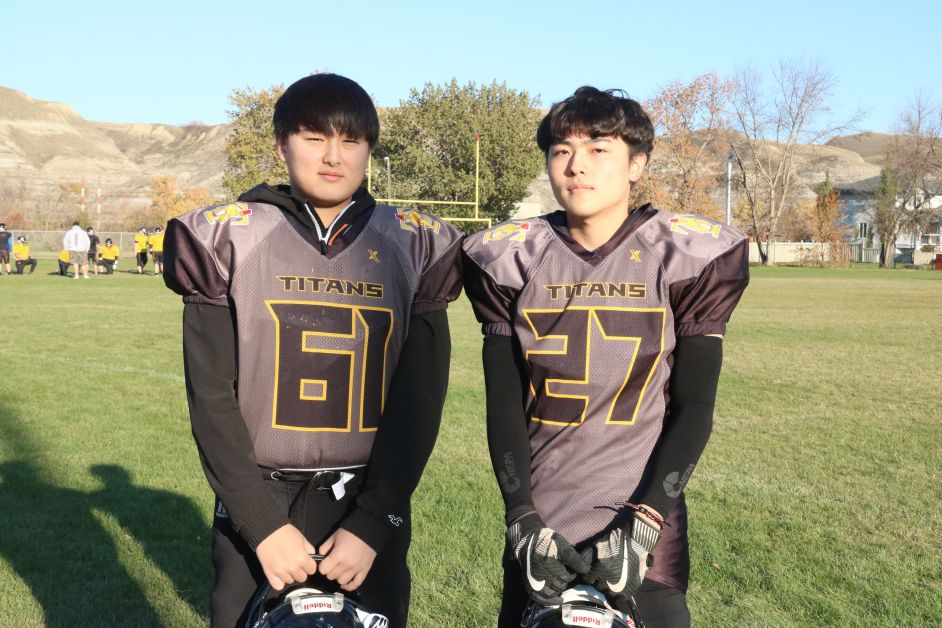 Drumheller Community Football has grown in its scope and successes in its short history, from simply fielding a team to a place where student-athletes are given a chance to learn and develop.
The program has seen success on the field, but just as importantly has seen players go on to successful careers, in various fields, taking their lessons from the field to their professional lives. Many have also continued playing football at the Collegiate and University level as well as junior football.
Some of this goes beyond the borders of the province, or even the country.
A growing component of the program is the participation of the international students who come to the valley to study at DVSS. For many, this is their first experience with American style football, but they are excelling on the field.
This year the Titans have two players from Korea on the squad and they are playing well. Myung Ju Jung is a lineman and is in his third year.  Sam Jung is a linebacker and kicker, this is his first year playing for the Titans.
Sam played basketball last year as well. At home in Korea, he says soccer is the most popular sport, but he also played basketball in Korea.
Myung Ju says he is enjoying playing football and that he has fun. As a lineman, he likes the hitting.
“It gets the stress out,” he laughs.
He says there is not much interest in football in Korea, but it is growing, but he has a chance to practice with some players there.
He says there are about 8-10 universities in Korea that now have teams. Many of the players are coming back after their military service to play.
Coach Ken Fournier says international players have made a big difference in their program. Over the years they have had players from Mexico, The Czech Republic, Belgium, Turkey, Brazil, the UAE, China, Nigeria, and Japan.
“They bring lots of energy and excitement and they have the opportunity to go home and play further,” said Fournier.
He says the sport is growing internationally and for these players to get this experience in Canada, and then go home, it gives them a great advantage. He adds that not only do they contribute to football but to other programs including soccer and basketball.
Sam is in Grade 11, so he will have another season of basketball and football. Myung Ju is in Grade 12 so this will be his final season. He is planning to continue his studies at the University in Calgary so he is unsure if he will continue to play. He does want to one day coach.
“If I get a chance, I will try,” he said.