One for the books: Dragons finish season with most wins in franchise history | DrumhellerMail 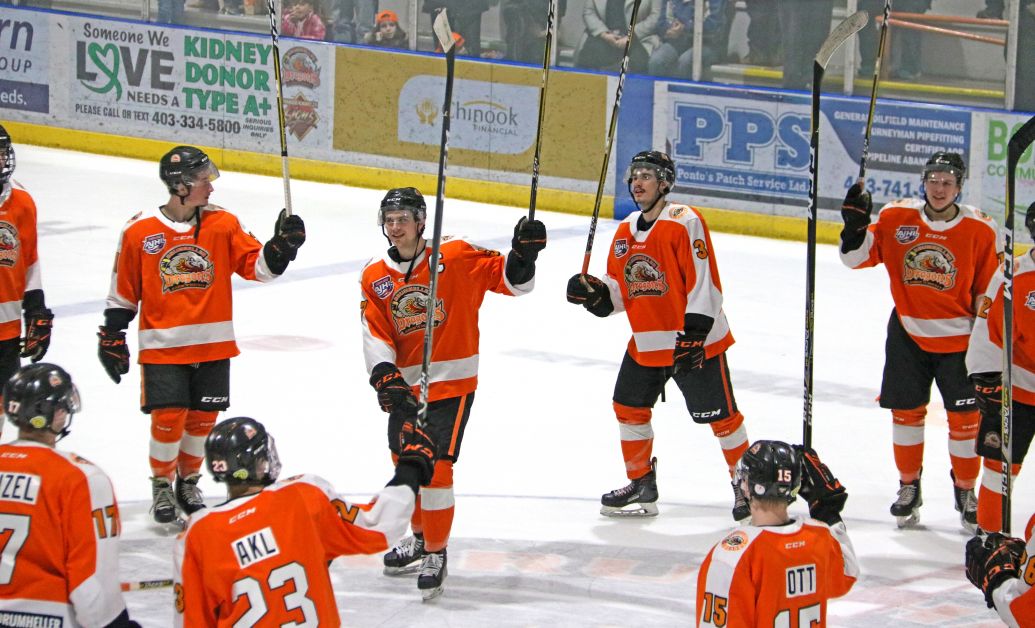 A season full of accomplishments came to a close for the Drumheller Dragons on Sunday afternoon, as Drumheller easily made notched a franchise record 37 wins to cap off the 2018/19 regular season.

Drumheller won 5-1 to the the Calgary Mustangs in a home matinee on March 3, ending the regular season in third place in the AJHL South Division with a record of 37-19-4, finishing behind Brooks and Okotoks. So ends a season which saw not only the franchise wins record behind beat, but which also saw Jordan Taupert become the top all time scorer for Drumheller and goalie Hunter Virostek getting the most wins in franchise history.

Drumheller beat the Calgary Mustangs at home March 3 in a 5-1 victory which was a slow start for the Dragons, as three penalties in the first period slowed the Drumheller offence. The Mustangs went up 1-0 in the first before Drumheller finally answered back with a with an early second period powerplay goal by Bradley Stonnell. Drumheller would maintain majority puch control for the second period but it wasn’t until the final minute of the frame that Hassan Akl and Derrick Budz would score back-to-back goals (Budz’ on the PP), to make it 3-1 heading into the third. Shane Ott would go on to score after just 18 seconds into the third, and Budz notched his second of the afternoon soon after. Both teams were getting physical and a Mustangs player took either a high-stick or a shot to the face, leaving the ice with a broken nose and causing a delay as officials cleaned up blood left on the ice.

The win came off a 7-3 rout of the Olds Grizzlies on the road the night prior, with Daniel Allin relieving Virostek from the net in preparation for the playoffs, which start Thursday, March 7 at home where the Dragons will get two games of home ice advantage against the Canmore Eagles. The Eagles finished fifth this season with a 30-25-5 record. Drumheller played the Eagles six times this season, winning 2 with a +10 point differential over Canmore.

Game time is at 7:00 p.m. this Thursday at the Memorial Arena.