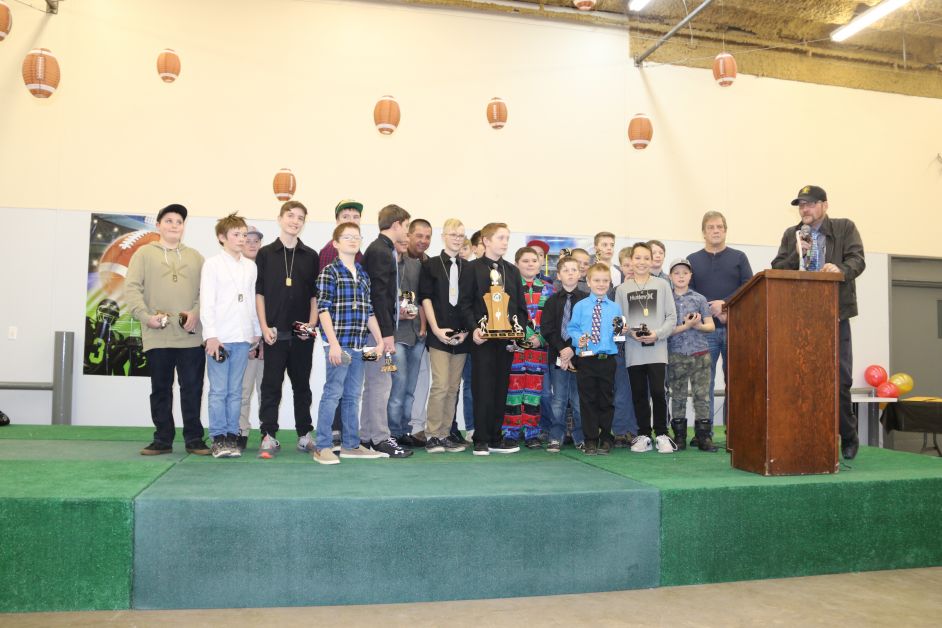 While snow has covered the grassy gridiron for the season, Titans and Terrapins gathered one last time to celebrate a great season of football.

Drumheller Community Football held its annual awards ceremony on Sunday, December 9 at the Stampede Barn. This was an opportunity to acknowledge the hard work and success by  Drumheller football players on the field.

Up first were the  Drumheller Terrapins, Peewee Football. The team had a great year and were able to win the C Division Championship.

This year the Leadership Award was presented to Gavan Cassidy, the Heart Award went to  Devon Landon and the Coach’s Choice went to Kael Webster.

The Bantam Titans also had a successful season. While it was a slow start, the team built its identity throughout the season successfully and it paid off in the field.

This year’s Most Improved Player is Spencer McNamara, Defensive Lineman of the Year is Kieran Wilson and the Most Sportsmanlike Player went to Tiegan Sattler. The Defensive Player of the Year was Haydn Jones. The Most Dedicated Player Award was given to Daxton Mulgrew and the Coach’s Choice went to Ben Messom.

The team also took time out to honour coach Ryan Hatch. He was this year’s Bantam head coach and has spent 11 seasons with the Titans. He has decided to step away from football for a few years and there were many touching tributes.

The Senior Titans were also presented awards for their hard work. Raedon Kipling won the  Leadership Award, Defensive Lineman of Year was Achille Ghesquire and Offensive Lineman of the Year was Vincent Jakl.  The Special Teams Award went to Marshall Johnston, the Most Sportsmanlike Player was Nolan Ranger and Most Dedicated was Ethan Duncalf.