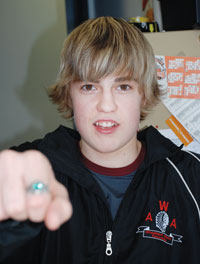 A Drumheller teenager came home a champion last week, helping bring his hockey team the bantam ‘AA’ league banner. Sean Davies, 13 a student of St. Anthony’s, finished the season on top as captain of the Wheatland Warriors when they won their final playoff series against Cranbrook on Thursday, March 26. The Warriors finished the series early with two wins on Wednesday and Thursday, 3-1 total in the series, and crowned the South Central Alberta Hockey League Championship, receiving champ rings.
“We battled hard all year, and we wanted finals,” said Davies, a first year player on the team and also the only one representing Drumheller. The Wheatland Warriors are based in Strathmore, and Davies is also affiliated with the ‘AAA’ Airdrie Xtreme, improving his chances of making it onto their roster next year. The Warriors finished their season in a close third place in the northern division, with a record of 19-9-4. Wheatland went on to beat Red Deer in the first round, Airdrie Lightning in the second, and won the north division banner against the Bow Valley Timberwolves. The final round against Cranbrook, the southern division champs, started rough with a loss in the first game. “We wanted it more, and their goalies came up big for us,” Davies said. “They were a tough team, we were both best in the league, but we got lucky bounces.” The Warriors only let Cranbrook take one game, as they won the next three, 7-4 in Cranbrook, a 5-4 overtime win in Strathmore, and finished the series with a 4-0 shutout in Strathmore on March 26. Davies was also a selection for the North Division All Star team, which was played on January 25. Warriors assistant coach Joey Koester says there is nothing but positive to say about Davies. “No question he is one of the most solid defensemen I’ve ever seen play,” Koester said. “He plays a lot of minutes, and it never shows.”