Condolences to the family of Henry Klassen | DrumhellerMail
02072023Tue

Details
10 May 2022
Written by DrumhellerMail 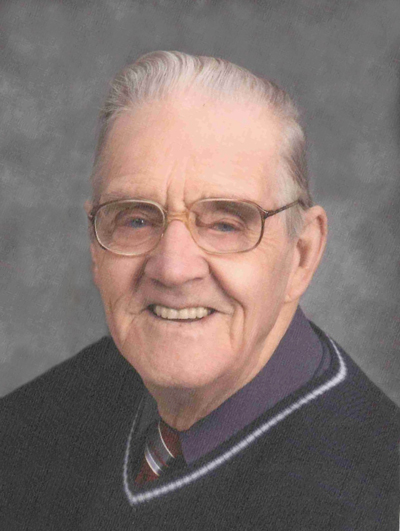 Henry Klassen was born on June 21, 1923, in Rosenthal Ukraine. He passed away peacefully on May 4, 2022, knowing he was going to live with Jesus his Savior in heaven. He was the 3rd child of Henry and Katherine Klassen.
Three years later in 1926, the family immigrated to Canada. The Canadian part of the journey started in Steinbach, MB, then to Hanna, AB, and then to Linden. The family settled east of Munson in 1929.
It was during this time in Munson, at the age of 12, he committed his life to Jesus Christ and received Him as his Savior. This commitment occurred while riding bicycle with his good friend John Siemens, who later became his brother-in-law. Henry commented in later years that the decision to follow Jesus as your Lord and Savior is the most important and life changing decision that a person can make regardless of your age.
In 1939, when he was 16 years old, his first job away from home was working for a neighbor. He hired on for the impressive amount of $25 per month. His excellent work ethic rewarded him, and he got a raise, earning $30 by the second month. From the stories that he told he was always appreciated and liked wherever he worked. Even now in retirement, his very personable personality was award winning. He had many friends, all of whom were younger than he and he enjoyed telling them of his life and experiences.
In the winter of 1973-74, he began a new and different love affair than he had ever had before. He met Katie Poettcker, a widow, from the Acme area who was in need of an escort to her Christmas party at her place of employment. He fit the bill to a tee. After a whirl-wind courtship they were married on March 30, 1974. When he said “I do” he accomplished something that takes most men at least 30 years. Not only was he a husband to Katie, but also the new Dad for Marvin, Clarence, Eric, and Ruby. Marvin was already married to Grace, and they had 2 children Mike and Kelly, so now he also became “grandpa” all in one day.
Henry always had a special love for music. He told of an older cousin recalling that at the age of 2, while still living in the Ukraine, Henry had sat on his grandfather’s knee, singing. He sang in many choirs from school age where the class would receive awards in different music
festivals in the school district. Many church choirs benefitted from his confident bass voice, he enjoyed singing in a men’s quartet the most. Henry could copy the voices of his favorite “singing heroes.” At the age of 98 he was still singing and on at least 2 occasions sang the national anthem at public events here in Drumheller.
Henry was predeceased by his wife Katie, parents Henry and Katherine, sisters Hertha (Jake Doerksen), Martha (Aron Willms), Hilda (Harvey Rowe), brothers-in-law John and Jake Siemens, his good friend and nephew Doug Siemens.
He leaves to mourn his passing; his family, Marv & Grace Poettcker, Clarence & SuAnn Poettcker, Eric & Ruth Poettcker, and Ruby & Dean Adie, eleven grandchildren & spouses, and eighteen great-grandchildren & two spouses. Two sisters Elizabeth (Beth) Siemens and Helen Siemens. Many nieces and nephews, all of whom were very special to Henry.
If friends and family so desire, they can send a donation in Henry’s memory to the Drumheller Alliance Church - 670, 7th Avenue East Drumheller T0J 0Y5.
A private family service was held on Saturday, May 7, 2022 at the Drumheller Alliance Church. Henry was laid to rest at the Drumheller Municipal Cemetery. To send condolences to the family, please visit www.sunsetltd.ca