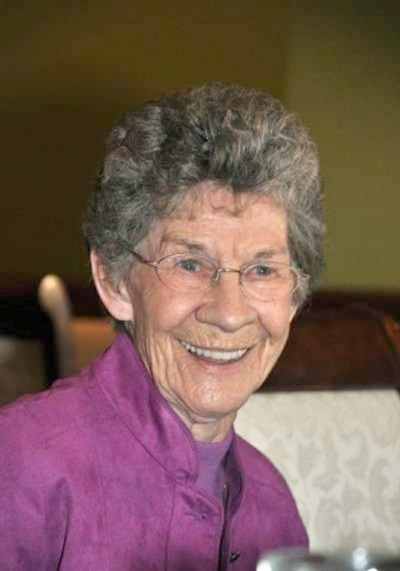 Mrs. Mary Lillian “Lily” Rideout (nee Humphrey) passed away at the Red Deer Regional Hospital Centre on Monday, December 27, 2021 at the age of 98 years. Lily was born on her parent’s homestead, near Delia, on November 13, 1923. She was the sixth of ten children.
Growing up during the depression made her tough, independent, and full of fun. After school, she moved to Calgary. She married Leslie Rideout in 1945.
They moved to Red Deer in 1946, where they founded Adviser Publications and raised four children. When Lily wasn’t working outside the home, looking after the children or grandchildren, keeping house, gardening or sewing, she volunteered her time as a Brownie Leader, at the Red Deer and District Museum, for the Royal Purple, the First Baptist Church and Canadian Blood Services. She was a reluctant traveller, but Les and Lily travelled throughout the U.S., Canada, South America and Falkland Islands. After Les passed away, Lily toured Hong Kong, China, Europe, England, Kenya, and travelled Western Canada with her cherished friend Mary-Lou. Lily loved the Lord and looked forward to going home to be with Him. She prayed daily for her family. Lily will be lovingly remembered by her sons, Brian Rideout (Lee-Anne) and David Rideout, and her daughter, Susan Murray (Cam), her daughter-in-law, Kathy; her grandchildren, Robyn Jensen (Dean), Laura Neaves (Matt), Randall Rideout (Jackelyn), Patrick Rideout (Adrienne Sholes), Julie Weber (Drew), Andrea Rideout, Eryn Sawatzky (Bern), Meghan Henderson (Chris), Johanna Murray, Nicole Murray, and Sam Murray and her great grandchildren. Lily was predeceased by her husband, Leslie Rideout, a son, Keith and her brothers and sisters.
If desired, Memorial Donations in Lily’s honour may be made directly to the Red Deer and District Museum at www.reddeermuseum.com. Condolences, memories and photos may be shared and viewed at www.parklandfuneralhome.com. Arrangements in care of Parkland Funeral Home and Crematorium, 6287 – 67 A Street (Taylor Drive), Red Deer. 403.340.4040.