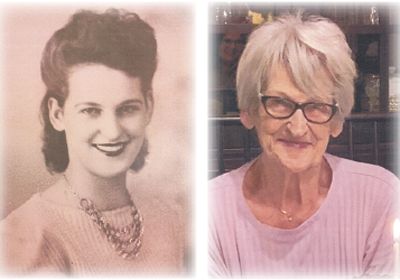 It is with deep sadness we announce the passing of Mary Rebus on Sunday, October 31, 2021, at the age of 97. Known to all of us as our Baba, she is survived and will be greatly missed by her children Judy Ostrowski, MaryAnne (Al) Farmer, Terry (Susan), Brian (Barb), Robert (Renee), Holly Rebus, Ken and Mark. She was blessed with grandchildren Roland Chapin, Jason Merkowsky,
Vincent Merkowsky, Jeremy (Jocelyn) Ostrowski, Chad Ostrowski, Tracey (Michelle) Farmer, Melissa (Greg) Janzen, Jeff (Stephanie) Farmer, Rachelle Rebus, Robbie Jr. (Chelsey) Rebus, Raeanne Rebus, and Alisha (Jason) Ewing, as well as 21 great-grandchildren and 3 great-great-grandchildren. Her siblings Olga, Rita, Mac, and many nieces and nephews. Her puppy Lucy (or as mom would say with her little smile “Lulu”) will also miss sleeping at her feet. She was predeceased by her parents Barbara and William (Guido and Baba), her husband Joseph, her daughter Gloria and son Eugene, son-in-law Gene, as well as her siblings George, Stanley, Eileen,
Alice, John, and Pauline. Mary was born and raised on the family farm near Andrew, Alberta until she met the love of her life Joseph, where they soon got married in Whitehorse, YT. After Gloria, their firstborn, they moved to the Drumheller Valley where they lived in Newcastle and raised their growing family. They later moved to her current residence in Drumheller where she remained until her passing. After raising her 10 children she spent many years working at the hospital in the laundry department where she eventually retired and enjoyed many years of baking, cooking, and of course caring for her many grandchildren and great-grandchildren. Anyone who was blessed to know Mary throughout her life knew how hard she worked for her family and her passion of cooking for all of them. Her family will never forget the 20+ people crammed around a table set up in the middle of the family living room at Christmas with a
massive Ukrainian feast prepared by Mother Mary. She had amazing cooking skills which she passed onto most of her children and was enjoyed by anyone who came through her doors. She was always proud of learning to drive later on in life and enjoyed travelling. She would always reminisce about her trip touring around Eastern Canada she took with her sisters and of course the
beaches in Hawaii to name a few. A special thank you to the staff in Acute Care at the Drumheller hospital for their kindness, compassion, and care in Baba’s final days.
There will be a Funeral Mass held for the family at St. Anthony’s Roman Catholic Church and a celebration of life in the future. In lieu of flowers, please consider a donation to STARS Air Ambulance in her memory.