Condolences to the family of Beryl Margaret Sigfusson | DrumhellerMail
10212021Thu 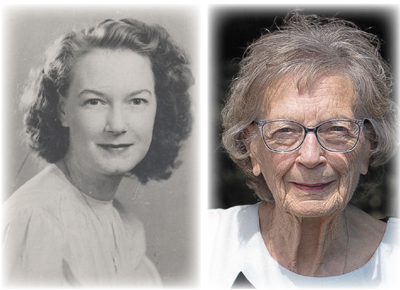 Beryl was born May 12, 1930 in Askern, Yorkshire, England, the second child born to John and Lucy Ann Banton. She passed away September 20, 2021 at the age of 91 after a very brave and valiant fight with her health conditions.
Growing up in England, Beryl enjoyed a happy childhood with memories of her love to ride her bike, play rounders and spend her summer vacations at the seaside with her family. She attended school in England and studied Commerce in Technical School.
When opportunity presented itself after WWII, she immigrated to Canada with her parents in June 1947. They joined her sister Winifred and Wendell Burns at their farm West of Wynyard, Saskatchewan. It was in Wynyard in 1948 where she met Steinie (Thorstein) Sigfusson, they were engaged in 1950 and married in 1952. They farmed with Steinie’s parents North of Wynyard for a few years and wasted no time growing their family. Here they had welcomed five of their seven children and Steinie’s parents also welcomed three younger brothers to their family. Steinie’s younger siblings spent much time together with their nieces and nephews and to this day have strong bonds and many stories to tell of time on the farm and Wynyard area. Due to growing families, Steinie and Beryl left the farm and Wynyard to follow his National Grain career. They moved to Archidal and Zealandia with National Grain (6th child) and then to Prince Albert (7th child) where a career with Corrections Canada began. In 1967 they transferred to Drumheller due to the opening of the new institution.
Beryl was busy tending to her large family and sometimes had taken short-term jobs or retail positions. In 1974 she started work at the Drumheller Institution full-time. She worked here, retiring from her clerical position in Sentence Administration in 1987. Steinie retired in June of 1988 and they had opportunity to do a little bit of travelling (Yukon & Alaska, USA & Maritimes, Bermuda and England). Unfortunately Steinie passed away in 1989. Beryl moved forward in her new adventures involving herself in the Pioneer Centre, card clubs, choir, volunteering (Royal Purple and Meals on Wheels) and travelling. Her friends from these groups were very dear to her and she spoke of you all often, with much fun and happiness of her time spent with you. Always the diplomat, and never wanting to offend anyone, we will not mention names for fear of forgetting someone but, you all know who are. She has told us that she will have many bridge partners to choose from when she gets to her new journey.
Beryl was predeceased by many beloved family members and friends, most notably her husband Steinie and daughter Jo-Ann. She leaves to mourn her
loss 3 daughters Maggie (Terry) Nelson, Sandra (Peter) Brak, Susan (Keith) Hempel and 3 sons Garth (Leslie) Sigfusson, Alan (Adele) Sigfusson and Terry Sigfusson. Grandchildren: Tanya Nelson (Scott), Ryan Nelson, Jodi Brak, Wes (Raeven) Brak, Brett Hempel, Chris (Janelle) Sigfusson, Lindsay (Jeff) Sereda, Kellie Sigfusson, Liana Sigfusson (Colton), Erica Sigfusson, Alex Sigfusson as well as 13 great-grandchildren and many extended family and friends.
The family would like to thank the AHS caregivers throughout Beryl’s journey in Drumheller, Stettler and Red Deer. Dr. Olfert, local PCN nurses & staff, Home Care nurses Lisa Grande and Marnie Pedersen and multiple Home Care staff that came to her home. So many that tried to make her as comfortable as possible over the last few months. As a large family COVID protocols restricted the personal care and visitations we would have liked to have had with her. We are grateful for the compassion, kindness and care she received from others when we could not be there. Thank you also to Sean Grande at Courtney Winters Funeral Home for his kindness.
It is difficult for her family to consider this world without her presence. She has always been such a pillar of example for our family. Always happy, with a sweet smile or giggle. Never complained, never raised her voice, never insulted, always dignified and refined. “If you have nothing nice to say, then you should say nothing at all”. Although we are so very, very sad to see her leave us, we are happy knowing that she will be free of her difficulties from the last few years and that she will forever watch over us. A private family service is to follow.
Courtney-Winter's Funeral Home in care of arrangements. 403-823-2666.