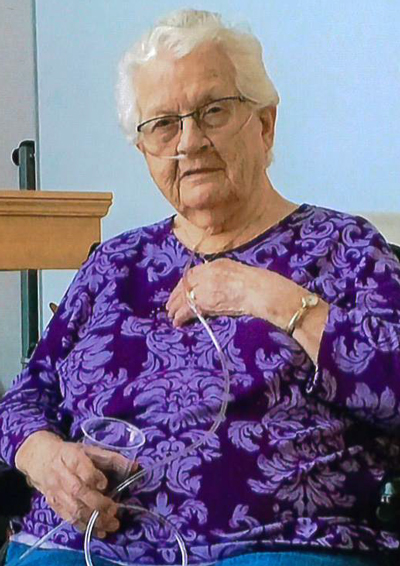 June, a much-loved Mother, Grandmother, Great Grandmother and Great-Great-Grandmother passed away peacefully in Long Term Care in Drumheller, Alberta at the age of 94. June was born to Ben and Mary Ellen Pickering and resided in Beynon, Alberta until age 17. Then the family moved to the Orkney District where she met and married Frank Trentham on February 21, 1946. They moved onto the farmstead with John Watt shortly after their marriage and this worked out well for everyone, even as the family grew. In 1985 John, Mom & Dad decided it was time to leave the country life behind and moved to their brand new home in Nacmine. They really enjoyed their garden, backyard and beautiful flowers. John left us in March 1994. Frank and June continued in their lovely home until their health deteriorated and they moved to Sunshine Lodge in Drumheller on February 1, 2014. June continued to live at Sunshine after Frank passed in 2016, eventually being moved to Hillview and later to Long Term Care in Drumheller. She will be lovingly remembered and deeply missed by her 6 children, Shirley Waldroff of Calgary, Ann (Hank) Ververda of Bashaw, Gary Trentham of Drumheller, Kathleen (Murray) of Meadow Lake SK., John (Beth) of Three Hills and Tracy (Shannon) of Airdrie.
She cherished each and every one of her Grandchildren (12) Great-Grandchildren (32) as well as (1) Great-Great-Grandchild. The family would like to sincerely thank the staff of all 3 facilities for their patience and wonderful respect they provided to Mom while she was in their care. Respecting our parent's wishes, there will be no formal funeral service held. Memorial donations are greatly accepted to the charity of one’s choice.