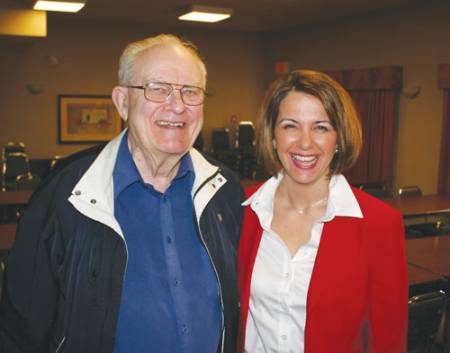 While a fall election is still months away, at least two Drumheller residents are declaring their candidacy for Drumheller Town Council.
The Mail has learned that Drumhellerites Bob Hannah and Tom Armstrong have decided to run for council.
“I am interested in running things better and to be more democratic,” said Hannah.
Hannah has served the community in the past, most specifically with the Legion. He was President of the Alberta NWT Command, and has been recognized by Veterans Affairs for his outstanding contribution to the care and wellbeing of veterans.
He would like to see council take a leadership role in decisions that affect the community.
“Never mind the management running the show, I think council should be running the show, showing leadership instead of management,” said Hannah.
While Armstrong, who has lived in the area for most of his life, may not have the experience, he says he has the voice of the people.
“I hang around the real tax payers, not the ‘elite.’ I’m down here with the beer drinkers and the cigarette smokers, the red necks,” he laughs.
He would also like to see council represent the people.
“I am seeing a lot of people on council, not all of them but some of them, who seem to have their own agendas, and it doesn’t really matter what the people want,” said Armstrong. “That is what you are elected for, not because there is a burning issue that you want to fix, it is for what the people want.”
He says in the past few years there has been a lot of things happen in the community that he does not like, and others agree with him. This includes the building of a community facility. He says the community facility is too far along and too much money has been invested to change the project.
One issue he says that has been bungled is the downtown parking. He says the merchants in downtown Drumheller should have been consulted because they are the most affected by the changes, and major contributors to taxes.
Armstrong says the timing of the candidates’ announcement is not strategic.
“Why not? Why not fire a gun across the bow now? Why wait until October? At least they know there is someone coming after them,” said Armstrong. 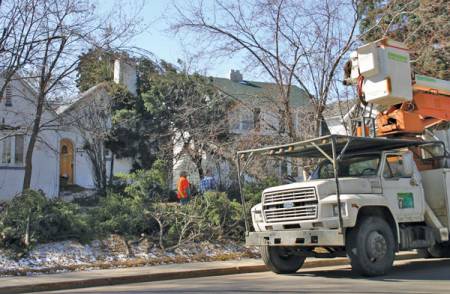 Gails of wind, snow and rain blasted the region in the early evening on Thursday, April 8, causing chaos on highways as well as region-wide power outages.
A wind warning was issued by Environment Canada on Thursday, advising of rain changing to snow and blowing snow, ending near midnight with a snowfall amount of 5 cm with wind gusting to 80 km/h.
Nick Gelych, Southeast Regional Manager at ATCO Electric, told The Mail they started receiving calls from customers at around 8 p.m.
“The storm affected a large area of east and central Alberta with regards to our service territory. The high winds, rain, snow and icing conditions caused quite a few of the higher voltage transmissions system power outages, which in turn affected the distribution of power to smaller communities.” Gelych explained.
It took just over two hours to restore the power for Drumheller on Thursday evening and ATCO was still dealing with power outages within the region on Friday as the storm had moved to central Alberta.
Al Kendrick, director of Infrastructure for the Town of Drumheller told The Mail the town’s emergency equipment worked well, despite a glitch with one of their communication equipment generators failing.
Friday was busy spent tidying up the debris and replacing the many road signs which had blown away.
There was report of a decorative light falling, causing no known damages.
“We were pretty lucky considering the gust of winds,” commented Kendrick.
A few properties in Drumheller suffered damages from falling trees with no known injuries.
Extremely poor road conditions and zero visibility caused numerous collisions on highways across the southern region, forcing road closures.
The RCMP reported road closures on the QE2, northbound and southbound  in the area between Carstairs and Olds overpass, QE2 southbound lanes north of Highway 53 and Highway 1 eastbound at Strathmore.

According to an RCMP media release, approximately 54 vehicles were involved in a single collision near the Olds overpass, forcing many travellers to seek overnight refuge in Olds, its college being open to provide accommodation.
Local businessman Fred Makowecki went to  the  Wildrose Alliance fundraiser in Delia on Thursday evening, an event attended by over 100 people who found themselves stranded when the wind storm started.
Makowecki told The Mail that most of the people waited for the wind to calm down before making their way home.
“We were probably the last ones to leave, we left about quarter after three in the morning,” he said, adding “I have lived in Southern Alberta for 31 years and that’s probably the worst I have ever seen.”