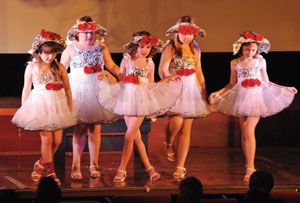 This year’s year-end dance revue by Carol Todor’s Dance School had a special guest, one that was tapping her toes on the stage of the Napier Theatre more than 50 years ago.
This was the second year the dance school has collaborated with the Napier for its year-end recital. This year the theme of the shows on May 9 and 10 was all vaudevillian. While the art of vaudeville predates their special guest’s performances by a few years, to have someone that performed in community variety acts in the 1940s, made the show special.
Beverly Larsen (nee Cowles) made her way from Chilliwack B.C. to take in the show. Bev is the mother of Napier Theatre owner Jeff Larsen, and she grew up in Drumheller. She had a trip planned for a family birthday party in Calgary, but arrived about a week early to see the Napier Theatre alive once again with dancing. 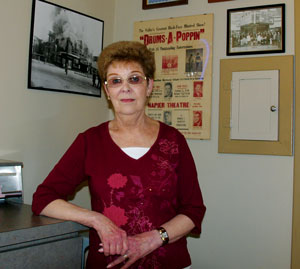 Of course, the theatre has changed. In 1951, the original building burned and the stage on which Bev performed is no longer there. While it was rebuilt as a theatre designed for motion pictures, the space still seems to have a live spirit.
Bev tells inSide Drumheller she thoroughly enjoyed the show, and the glint in her eye hints it may have brought back a few memories.
Many theatre-goers have probably seen Bev’s picture on a poster from 1949 at the Napier. While still a preteen, she was part of some of the community variety shows of the time produced by Horace McHeffey.
The show featured dancing, music and McHeffey’s famous ‘chalk talk’ where he would narrate a story and illustrate live as he spoke. The show also featured the traditional, if not politically correct, minstrel show. Bill Franklin would pound out a tune on the piano for all the acts.
Bev was born and raised in the valley.  Her father was a carpenter who worked with Earl Parsons. He was also a musician, and played saxophone for a high school dance band along with Joe Yopek and Bob Llewellyn. Bev played piano.
She got her start dancing under the direction of Kay Bigelow.
As the mines closed in the 1940s and work dried up for her father, they moved to Calgary. The family came back every summer.
“I was never sorry I grew up here,” she said emphatically.
She enjoys visiting as the valley has always been home to her. Many of the landmarks remain, although many, including the Newcastle cottage schools and DHS where she attended, are no longer here. Neither is the Sylvia Theatre where she also performed.
“I never thought my son would come back to Drumheller and run the theatre,” she chuckles.
She is glad dancing is alive and well in the valley. Todor has now been operating her dance school for 26 years.
“It is great she has continued teaching,” said Bev, adding it great for the little ones to be involved in dancing. 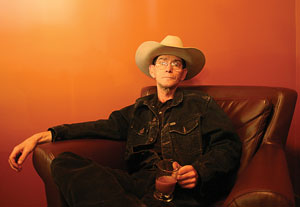 Jim Nicholson says he is 50 years old going on 90.
“I have four natural children and two adopted, and I am not supposed to be here but I am.”
“I am not a hero, I am not a miracle, I am just Jim,” he explains.
He has survived rapid progressive Multiple Sclerosis, numerous strokes, two heart attacks, and two bouts with prostate cancer.
“I made the longest journey of my life; many people haven’t had to make it. That long journey is only 18 inches, it’s the distance from here to here,” Jim points from his heart to his head. “It is a very, very long journey, though.”
At the age of 29, he lived in British Columbia, was a fit man and a medic in The Royal Canadian Regiment.
One day, walking in a mall in BC with his wife and children, he collapsed and found himself blind and paralyzed from the neck down.
When he was taken into care, specialists told him he had rapid progressive MS.
His sight slowly came back, as well as movement in his upper body, but it took 16 years for his lower body to be fully mobile again.
“My aspirations and dreams in life ended right then,” he says.
A field medic in the military, he had wanted to be a doctor.
Jim was told in probably five years he’d be on life support.
“That’s not happening!” he told himself.
This affected Jim deeply.
“I pushed everything and everyone away. I am the kind of person that cannot abide by being dependent upon others…so I was ready to give up. I was afraid.”
Jim explains that this affliction made him dig deep and start on that 18-inch journey.
After three months in hospital, Jim found himself a home to live in and glued the pieces back together with his wife and children.
‘You know what, if this is the way I am going to spend the rest of my life, I am going to prove I can,’ he told himself, “and I did.”
“So I began racing wheelchairs, then I started a journey across North America to raise money for medical research for MS.” For financial reasons, his trip was cut short.
On his return to BC, he started working again, first as a car salesman, then, as he was a chef by trade, he went back to cooking.
A series of strokes and a heart attack forced him to stop working for a while, but, contrary to doctors prediction, he was soon working again.
After spending eight years in a wheelchair and another eight in leg braces, Jim was determined to walk again.
“I believed I could walk again.  They said I would never walk again, but after eight years in leg braces, I started to walk unaided. I have only started being able to walk properly with my own legs two years ago.”
During a routine check six years ago, Jim found out he had prostate cancer.
“I had all the indicative signs of prostate cancer. It was another slap in the face as my marriage was breaking down at the time too.”
With nowhere to live, he came to Drumheller to live with his parents temporarily and he started radiation treatment.
“I found the doctors very good, very understanding and caring,” he says.
The treatment was hard on him though, which he describes as “miserable at best.”
During another routine check about a year ago, he found the cancer had come back.
“I went down to 98 pounds, I had another radiation treatment which ended recently. It really was not pleasant, it was exhausting, more than exhausting even.”
Jim found again the best way to get through it was by shutting himself off.
“Not to feel emotion,” he explains. “The emotion will eat you more than the treatment will.”
He kept believing in himself though.
“I had to find that inner strength, everyone who goes through these treatments has to find even a sliver of inner strength.”
To beat the exhaustion he felt during the treatment, Jim threw himself into work.
“I did everything everybody told me I couldn’t do!”
He worked at the Atlas Coal Mine, rebuilding an historical railway, worked on vehicles and landscaping. He even started a business called As you wish.
“Anything people want to do, all the work people don’t want to do,” he smiles.
“It wasn’t easy but I did it, I took my frustration out on my work, pushing my body. Emotionally the treatment beat me but I never showed anybody.”
He has recently finished a course of 65 radiation treatments.
“Being a strong individual, anybody who has survived cancer knows that, it is difficult, it is miserable, it is frightening and nothing in life prepares you for that.”
“It’s all about that long 18- inch journey. I am still on that journey.
As an individual who has suffered all these illnesses, I am not afraid to die.”
“This illness is not going to control my life, I will control it. A doctor might tell me my days are numbered and I only have so long, but the way I see it and the way I am, nobody will tell me when I am going to die, I will tell me when I am going to die.”
Although Jim has never wanted help from other people or support organizations, he is a great supporter of the concept of the Relay for Life. He explains when he was approached by the Relay team to do this interview, he didn’t hesitate.
“Relay for life is a fantastic idea, the concept and the aspect of doing this to help prevent somebody else going through this kind of stuff is fantastic.” 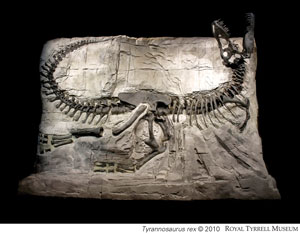 The Royal Tyrrell Museum, quite possibly the valley’s crown jewel of attraction, is celebrating its 25th birthday this year and is celebrating with an exhibit and party as gargantuan as the museum’s contents.
To kick off its anniversary season, a new exhibit, Alberta Unearthed: 25 stories of discovery, will showcase 25 of the museum’s most significant specimens and the intriguing stories behind them.
May well being the centerpiece of the new exhibit, 'Black Beauty', one of the most complete tyrannosaurus rex fossils in the world, was found in Crowsnest Pass, Alberta by two children fishing.
She is one of many examples of the interesting stories behind the chosen specimens on exhibit.
Selecting 25 specimens from a collection of 130,000 fossils was a challenging task.
“The specimens we chose tell the story of the Royal Tyrrell Museum while highlighting some of the most significant discoveries in modern science,” said Andrew Neuman, the museum’s executive director.
“The result is an incredible exhibit, featuring everything from a stunning tyrannosaurus rex named ‘Black Beauty’ to an exquisite piece of amber, to a flying turtle from China.”
Alberta Unearthed will open to the public Saturday, May 22, and the anniversary celebrations will be held September 17-19. The official Royal Tyrrell Museum birthday party will be held Saturday, September 25.
“The Royal Tyrrell Museum has been making Albertans proud for 25 years,” said Lindsay Blackett, Minister of Alberta Culture and Community Spirit.
Alberta Unearthed is about the people, places, and pieces of heart of Canada’s world renowned dinosaur museum. Amazing stories, extraordinary illustrations and photographs, and spectacular specimens come together in this tribute to a quarter century of scientific success.
The Tyrrell has come far from when it first layed down its mandate to share Alberta’s rich fossil history.
New initiatives set out by the museum include the ambitious distance learning program now being offered.
Students can now have the expertise of a world-renowned Tyrrell palaeontologist broadcast into their classroom via the internet, with interactive and intimate instruction being sent as far as New Zealand.