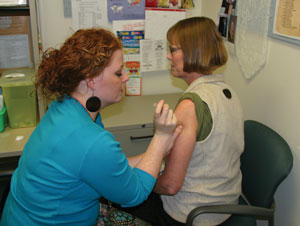 Update: On Wednesday, November 4, Alberta Health Services announced flu clinics for The Central Alberta Region. There will be an H1N1 vaccination clinic at the Stampede Barn on Saturday, November 7 from 9 a.m. to 4 p.m. The clinic will only be for children between the ages of six months and five years, as of November 1, and pregnant women.

There are also clinics for children between six months and five years of age, and pregnant women in Hanna on Thursday, November 5 at the Hanna Community Centre from 9 a.m. to 4 p.m., and in Three Hills at the Priairie Bible Institute on Friday, November 6 from 1 p.m. to 8 p.m.

As of Wednesday, November 4, according to the Alberta Health Services web site there are no flu clinics scheduled in Drumheller. On October 31 Alberta Health Services accounced it would be suspending Alberta flu clinics, both for the seasonal flu shots and the H1N1 vaccines. On Tuesday, November 3 it was announced clinics would resume this week targeting spcicially children between six months, and under five years of age, and then pregnant women. So far ther are no clinics scheduled in Drumheller.

The following is the most recent press release from Alberta Health Services.

Due to the unexpected national shortage of the H1N1 vaccine, Alberta Health Services and Alberta Health and Wellness today announced plans to begin targeted immunization of Albertans at high risk.

Starting on Thursday, Alberta Health Services (AHS) will begin targeting children aged six months (on day of vaccination) to under five years as of November 1st.  Proof of age (Health Care card, birth certificate or other valid identification) must be provided.

On Friday, November 6, AHS will expand the program to include pregnant women.

At this time, the vaccine will not be available to other Albertans. When more vaccine becomes available from the manufacturer, the targeted immunization program will be further expanded to include people under 65 with chronic health conditions. Details will be announced as more information becomes available on the vaccine supply.

All Albertans who want to be immunized will have that opportunity when increased supply of the vaccine arrives from the manufacturer.

To ensure vaccine can be provided to high risk groups, no exceptions can be allowed. This is a provincewide roll-out. Everyone is asked to go the AHS website for detailed information on clinic times and locations. One new clinic will be added in both Calgary (Stampede Grandstand) and Edmonton (Commonwealth Stadium); each of which will open on Thursday, November 5. This will bring to six the total number of clinics in each city.

"I want to re-emphasize that the plan we are rolling out is targeting those in high risk groups that are vulnerable to serious medical complications related to H1N1," said Dr. Andre Corriveau, Alberta's Chief Medical Office of Health. "When clinics resume on Thursday, I urge parents who have children aged six months to under five years as of November 1st to be immunized. On Friday, pregnant women will be added to the program. I ask all Albertans to be patient as we deal with the vaccine supply shortage and remind all Albertans there will be enough vaccine for everyone who needs or wants it."

For the most current information on the targeted vaccination campaign, including dates, clinic locations and groups being vaccinated, go to: www.albertahealthservices.ca 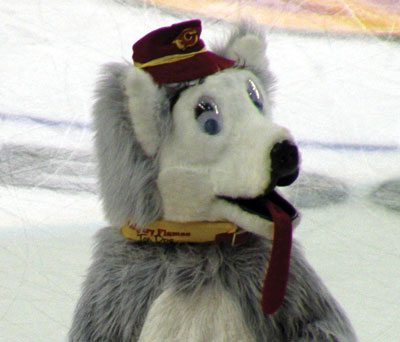 The list of NHL celebrities attending the NHL Alumni and Drumheller All Stars Hockey Game is getting bigger.
The Fundraising Committee for the Badlands Community Facility is pleased to announce that Harvey the Hound will be at the Memorial Arena for this fund raising event.
Harvey the Hound made his debut with the Calgary Flames as their team mascot in 1983. Harvey has been a fixture with the Flames. Harvey has remained a mainstay at Flames games, and at many events throughout Calgary and southern Alberta ever since. He was the NHL’s very first mascot.
Harvey gained widespread publicity on January 20, 2003, following an incident with the
Edmonton Oilers head coach, Craig MacTavish. With the Flames leading 4–0, Harvey was taunting the Oilers behind their bench. The Oilers squirted him and eventually a frustrated coach reached up and ripped Harvey’s signature red tongue out of his mouth, tossing it into the crowd.
The incident made headlines throughout North America, and led to many jokes, including having many other NHL team mascots arrive at the 2003 All-Star Game with their tongues hanging out.
The NHL Alumni charity hockey game will be held at the Drumheller Memorial arena on November 11th. All proceeds from the fundraiser will go towards the Badlands Community Facility. Hockey fans will be able to see the likes of Lanny McDonald, Jim Peplinski Jamie Mcoun, and more.
Tickets for the game are only $20 and are available at the Sports Room Source for Sports, The Chinook Credit Union and ATB Financial. Get your tickets soon as the fund raising committee is expecting a sell out.
There is also an opportunity to attend a Meet and Greet which is sponsored by O’Sheas and
Canalta Hotels. The Meet and Greet will take place at O’Sheas Restaurant after the charity hockey game. Tickets for this event are $50.00 and are available at the Sports Room Source for Sports.
All proceeds from the meet and greet will also go towards the Badlands Community Facilities. 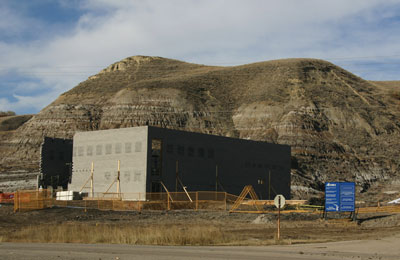 Construction is continuing smoothly on the new St. Anthony’s School on North Dinosaur Trail, and is on Schedule.
There has been a flurry of activity on the site across from the Drumheller Health Centre since ground was broken on March 27 on the $13.7 million project of a new Catholic K-12 school. The construction is right where it should be says Hans Woehleke associate superintendent, administration & operations for Christ the Redeemer School Division.
“Everything looks like we are on schedule,” he says. “The construction crews are moving forward and the time lines look quite good.”
Assistant superintendent Vincent Van Hyfte, says favourable weather has helped the project advance at a quick pace. He says there were some early delays as site work to mitigate the mines below the surface, but it wasn’t significant.
Most recently he said people can see the new gymnasium walls erected.
“We are very pleased with the work that is moving forward in a positive way.
The school has been a long time coming since the original Drumheller Solution was announced in September of 2005. The facility was designed by Barry John of Gibb Gage Architects. Bay View Constructors Limited of Calgary has been selected as the managing contractor for the new school. They broke ground at  the end of March this year.
Woehleke says the project realized tremendous savings because of the economic slowdown.
“It was the exact opposite to what we experienced in Canmore. In Canmore, had we built that school a few years earlier it would have been half the cost. Because of the economy we really benefitted,” said Woehleke.
He adds they are also on budget.
The facility is being constructed for a capacity of 550 students. The new school will house two classrooms per grade, have a full size 400 seat gymnasium, separate wings for elementary and junior/senior high, computers and news media areas, a library, chapel, and music and drama rooms
The school is slated to open in December 2010.