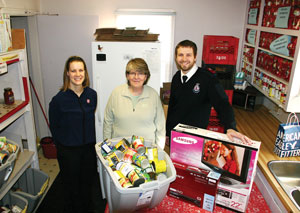 The Drumheller Salvation Army is the latest community group that has benefitted from the World’s Largest Dinosaur.
The Worlds Largest Dinosaur Legacy Fund invests a portion of the funds generated by visitation to the World’s Largest Dinosaur and the gift shop to community economic development initiatives in the region.
The fund provided $2,000 worth of materials to upgrade the Drumheller Salvation Army Food Bank.
“With the Chamber’s donation, we were able to make the food bank more organized, efficient, and safer,” said Lt. Rachel Sheils of the Drumheller Salvation Army.
Upgrades to the Food Bank include an upright freezer. While they did not replace any shelves, they have been enhanced with bins that increase the storage. Rather than just being able to stack cans, they can fill the whole shelf area with food. This system allows them to better date sort the food, thus reducing spoilage.
The change has allowed the Food Bank to condense the complete operation from three rooms to just two and also has made it more efficient for volunteers to fill hampers.
“For our volunteers, it means they have a better work environment. If we can keep our volunteers happy, we can also serve the community better,” said Sheils. “For those who make donations to The Salvation Army, we want to make sure that nothing expires on our shelves. When we receive a donation, we category sort them and date sort them, and this set up allows us to make sure we are good stewards of what donations we receive.”
The improvements also include hand sanitizer stations, and every item for the improvement is portable, so if the Church decided to move its Food Bank operation, this investment would not be lost.
President of the Drumheller and District Chamber of Commerce, Cindy Clark said The Salvation Army’s application to the Legacy Fund outlined the need for the improvements.
“We saw pictures of what it looked like before and how they desperately needed some equipment to make it better,” said Clark, “We were glad the Legacy Fund offered us the opportunity to do that.”
The Chamber of Commerce wants to be the voice for business in the community, but that also means we help out those less fortunate in the community.”
The Legacy Fund has paid out $60,000 since its inception, with 11 community groups receiving support for a variety of worthy projects. 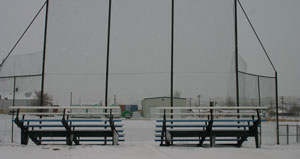 As construction work is underway for the Badlands Community Facility, and with the John Anderson Park diamond no longer useable, a location for its replacement is now being looked into and rebuilding the diamond situated in Rosedale has been proposed.
With this in mind, the Town of Drumheller recently applied for a grant via the Municipal Sponsorship Program.
If approved, the grant would be for $73,791. With capital cost estimated at $347,629 and expected inkind contributions of $137,717, an additional funding of $136,121 will remain to be found.
The project is therefore expected to be completed in phases, with further grants being obtained in 2010 and 2011.
Originally, the town had proposed for a replacement diamond to be created at the Newcastle Recreation area, however, Al Kendrick, director of Infrastructure Services explains, “the Rosedale diamond is not in the best condition now, we have done some work with it, it’s difficult to get people to use it...because of the condition it is in.”
Kendrick also attributes the lack of use due to children getting involved into different activities  nowadays, such as soccer.
He also believes the implicatons from council is that they want to have recreation facilities serving the easterly portion of the community as well as the west side of town.

With the community hall and skating rink in close proximity to the diamond together  with green areas and closeby campground, it is hoped that rebuilding the diamond may draw people to use it more.

Although a new diamond at Newcastle Recreation Park is still an option and once the funding is secured, the logistics will be looked at again.
Kendrick is hoping to hear about the funding by the end of March, but warns the funding process can take longer so it may be that work will need to wait until the fall to begin in order not to disturb it during the season when it will be utilized.
If the funding doesn’t come through, Kendrick confirmed the diamond will be maintained as is. 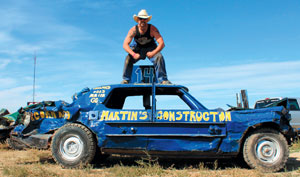 The Drumheller and District Agriculture Society has a full slate of events planned this season including more racing.
The society held its Annual General Meeting on January 12. The society is planning  to attain International Motor Contest Association (IMCA) certification in its racing track. This means the society may be hosting four high profile racing events.
Duxbury, who was installed as president of the Ag Society at the meeting, says the IMCA is an international sanctioning body, and in Drumheller, they will have two classes of racing.
“We will have our hobby stock cars as an entry level racing, and then we’ll have the IMCA stack cars and the IMCA modified Stock car classes,” said Duxbury. “We do have a couple local racers with IMCA modified cars, and we do have a couple with IMCA stock cars.”
The society also has a commitment from the Alberta Outlaw Modified Racing Association for an event.
The Ag Society had a successful 2009 season. It hosted a number of events including the Dinosaur Derby. Despite a rainout, the society was able to keep the demo derby tradition alive with a one-day event. This year also saw the introduction of the Tractor Pull and Trade Show.
They have established a relationship with Drumheller Gymnastics and hope to build on hat partnership in the future.
Despite these successes, Duxbury says the Ag Society did find itself in the red. The major reason was the lack of revenue through sponsorship at the Dino Derby, as well as capital investments on the facility. The Stampede Barn last year received a freshening up with a coat of paint, improvements to the kitchen, plumbing work, and major work on the track and barn areas was completed.
He is confident the society will be able to pull ahead financially this year. As it was a more active Agriculture Society, its annual bursary will be increased. The society has also been able to secure a casino.
At the AGM, Larry Duxbury has succeeded Gerry McLean as president of the Ag Society while Mike Hansen is first vice president, Gord MacKinnon is second vice president, Trevor Fabick is treasurer, and recording secretary is Melanie Fabick. McLean sits on the executive as past president.
Duxbury says the society is always welcoming to volunteers that wish to join the society, or volunteer for events. For more information 403-823-9339.