Consistency is the key, and that is how 10-year-old Dylan Jensen wound up on top of spaghetti.
While Dylan isn’t the fastest eater, his three-year fundraising total has topped them all. This year he raised $1,514 at the fifth annual Spaghetti Eating Contest. Combined over the last three years he has raised more than $3,300. His reason is simple.
“I like helping the Salvation Army,” he said.
While many of the contestants work hard to garner pledges from family and friends, Dylan is going door-to-door collecting support. His little brother Cody helped him along, by taking on some of Dylan’s Boy Scout popcorn selling responsibilities.
Dylan’s support, along with the rest of the contestants, businesses and individual donors, helped to raise $5,483.27 at the Salvation Army/Boston Pizza Spaghetti Eating Contest. This was its best result so far, and every year the total has climbed.
“It is a proud day for Drumheller to raise this much money in one event,” said Boston Pizza general manager Stacey Stewart.
It was an all out feeding frenzy at the table as four categories of eaters quickly satisfied their appetites.
In the youth category, the champion was dethroned as Malcolm Kimmel, 10, beat out last year’s champion, his older brother Austin, and in doing so set a new record.
A new category this year saw the Drumheller Titans take on the Drumheller Dragons in an all out eating war. In the end, local Dragon Josh Kluck clocked in at an amazing 1:07 and won the contest.  Titan Brandon Rowbottom was the top fundraiser in this category, bringing in $140.
In the ladies category Kalena Pierce won the contest in a field of just four. Jessica Garrett of Chinook Credit Union was the top fundraiser with $115.
While there was only a handful in the ladies category, the men were elbow to elbow in the contest for the fastest spaghetti eater. In the end, Eric Neuman cleaned his plate seconds before all other competitors, claiming the top prize. Maurice Mander of Drumheller Co-op was the top fundraiser with $347.50.
Once again, Lt. Matt Sheils of the Drumheller Salvation Army was overwhelmed by the support. The funds raised by the event go toward the Salvation Army’s Community Services. This includes the food bank, Christmas assistance, youth and senior programs and many more.
“Events like these show this is a special community,” said Sheils, “coming together to help neighbours get back on their feet.”
This was a big day for the Salvation Army as it also launched its new website www.drumsa.org. Sheils said this is one more way the Salvation Army is trying to communicate with the community and show the real demand.
This year the food bank saw a 27 per cent increase in users, and there are 127 new users of the service.
“We feel overwhelmed, it shows the residents of the town are willing to do something to help our town,” adding his appreciation for Boston Pizza, and all the sponsors that support the event.
The spaghetti-eating contest has become a tradition in Drumheller and in other communities as well. Since they launched the event, restaurants in many communities are staging the same event. 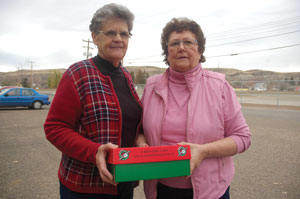 Operation Christmas Child is upon Drumheller, with over 500 shoeboxes ready to be stuffed with invaluable toys and products to be distributed to over a dozen countries globally.

Gardens West magazine has honoured a stunning garden from the Drumheller area on its cover of the November/December edition, with a big spread proving that lavish and beautiful gardens can survive the arid badlands.
Don and Sherry Tchir’s 14 year work-in-progress was photographed last summer, but is featured now in a full spread of the Prairie Edition of the gardening magazine.
The edition, which hit newsstands on Monday, features the garden made by the owners of Kneehill Creek Tree.
“It’s nice being recognized,” says Sherry. “Some people have sports, we like fooling around in the yard. It’s our thing.”
Almost every tree on the property was planted by the family– they estimate they put over 2,000 into the ground.
Gardening in Drumheller definitely presents a challenge, “with our nice benonite soil,” says Sherry, but with work and vision a beautiful spot can be made.
“Don is very talented,” Sherry says, “it’s something you’re born with.”
Gardens West editor Melissa Cornwell writes, “The Tchir's sprawling ranch-style home nestles within woodland composed of many hand-planted trees and natural tree growth that has been thriving on the banks of the river for a century or more. The woods behind the perennial garden are thin enough to give an alluring hint of the river that flows below the property. A trail leads down a gentle slope, past a wooden gazebo and over a bridge to steps that take one down to a level space near the bottom. Here the Tchirs created a firepit area with picnic tables, chairs and other seating - the perfect place to watch the lazy river flow by.
“Indeed, as one drives up the Tchir's tree-lined lane, were it not for the rugged coulee walls rising behind and across the river, one might have a hard time remembering that this is part of the 'Alberta Badlands'."
The Tchir garden is located on the Highway 575 turnoff to Orkney.