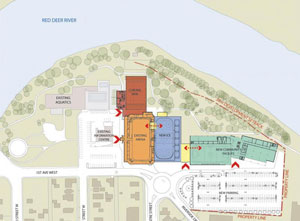 Members of the public were pleased with the overall plan for the town’s $23 million Badlands Community Facility, following an Open House Wednesday evening,  March 10.
This was the first time that an updated plan has been viewed by the public and existing donors for the project. Over 70 people attended the event at the Civic Centre, which was hosted by members of the Facility’s Design Committee.
Site work has already begun on the location of the old John Anderson Ball Park and adjacent parking lot and, according to David Edmunds of the Calgary architectural firm, Graham, Edmunds, Cartier, the plans are basically complete.
Drawings will soon be okayed by the Town and the Committee, and a call for tenders will go out in April.
“We’re pretty happy with the way the building has turned out,” said Edmunds. “It is going to fit into the landscape here nicely and it is going to be a really great mix of spaces in the heart of the community. You are going  to get a lot of use from the building from six in the morning until midnight, as the uses change.”                Target completion date for the project is August of 2011.
The Drumheller Public Library will occupy the main floor with some 9,000 sq. ft., about 1/3 more space than they currently enjoy in the downtown location. Several rooms on the north side of the main floor will be added for gallery, crafts and multi-use. Above the library will be a banquet hall that will be available for meetings and banquets and can be divided if need be. A servery area will allow for food preparation for catered events. In the west wing of the facility, the main floor will house a field house and fitness centre, along with team rooms and locker rooms, to facilitate the multi-use focus of the building. This area will be used for a variety of sports such as badminton, volleyball, basketball and gymnastics, and accommodate several activities at the same time. Storage areas are included as well as a fitness studio. On the second level, a running/walking track is planned, open to the area below.
The facility would be constructed east of the Memorial Arena allowing the curling rink to remain in the short term. Eventually, a second rink surface and a curling facility are  to be included on the site.
Design Committee co-chair Brooke Christianson told inSide Drumheller, “We’re very pleased that we had a great showing from the public tonight at the Open House. There has been some great interaction and questions,” said Christianson. “We’ve been able to thank our donors and the drawings are fantastic.”
The town is optimistic about greatly improving cost recovery on operations for the facility, once it is built. According to information obtained from the town, “the existing subsidy for the arena and Aquaplex is $477,692, with a recovery on operations of over 40 per cent. The incremental subsidy required to operate the new spaces will be $244,975 and recovery on operations of 77.60 per cent”.
Town Councillor Sharel Shoff was pleased with what the facility has to offer the public.
“I think it will serve the people of Drumheller and all types of people; the seniors, the young, the people who want to exercise and become physically fit. I think it will  bring people with the banquet facility, it will be good for the Music Festival and people who can use the meeting rooms,” said  Shoff. “I think it is all around good for Drumheller.”
The Facility’s Fundraising Committee, headed by Jeff Hall, is currently accepting donations from the public and private sectors, and the total now stands at approximately $1.7 million, out of a total goal of $6 million for the first phase. 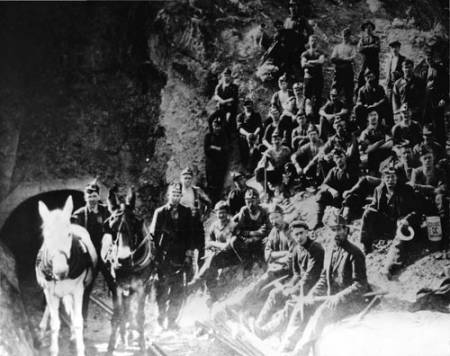 The history of Drumheller is a series of tales that have almost become legend.  Sam Drumheller stumbling on Thomas Greentree’s homestead; discovering coal seams; the mad dash to register lands to exploit the coal; the coin toss to name the community; contested land deals and trips along the frozen Red Deer River in a Model T Ford.
A couple names that are not heard as often in the retelling of the birth of Drumheller are Garnet Napier Coyle and Jesse Gouge. These two were the first to commercially exploit the vast coal reserves in the valley, and next year will be the 100th anniversary of the Newcastle Mine.
Linda Digby, executive director of the Atlas Coal Mine is hoping to build community support to celebrate the centennial of coal mining in the valley, and has scheduled a meeting in the near future to look at ideas.
“The Atlas Coal Mine Historical Society preserves and presents the coal mining history of the entire Drumheller Valley, from Nacmine and Midland, up to Wayne, and out to East Coulee.  The whole Drumheller Valley was founded on coal. We believe the 100th anniversary of our founding is something to celebrate, and something to commemorate,” said Digby.
“Drumheller, this is your story.  Let’s get together and talk about what this means to you.”
In 1911, Coyle, who owned a hardware store in Acme, and Gouge, who owned a farm implement dealership, partnered and the first commercial coal  mine in the valley was registered.  The Rosedale Mine and the Star Mine quickly followed the Newcastle. In 1912, eight other mines opened and by 1921, there were 27 mines operating in the valley.
The Newcastle and a handful of other predate the incorporation of the Town of Drumheller. For Digby, this is where much of the modern history of the valley begins, with the mines. It attracted business and investments in the valley as well as thousands from all over the world to eke out a living in Canada.
Gouge was successful in business ventures, and was a community leader serving on the local Board of Trade as well as the Rotary Club. Coyle was known to have the Midas touch, had interests in a number of mines, and eventually owned both the Regent Theatre and the Napier, which still bears his name.
The remnants of this history live on through the many institutions that celebrate the days of coal mining such as the Atlas Coal Mine, and the East Coulee School Museum. It is reflected in a historic downtown Drumheller where many of the buildings sprung up during this boom, and through the families and names that have endured for the near century since the roots of mining began.
Digby feels it is important to mark the century since coal came to prominence, and it is important the community is involved in creating the celebrations. They are looking for ideas and involvement in creating these celebrations as well as a Miners Memorial.
A meeting has been scheduled for Monday, March 29 from 7 p.m. to 9 p.m. at the Civic Centre to brainstorm for ideas on how to celebrate the century of coal mining and explore the question what does coal mining mean to individuals as well as Drumheller. 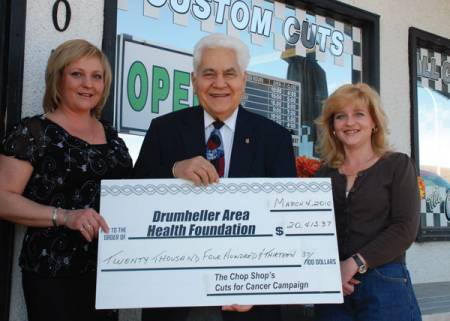 In its sixth year, Cuts For Cancer hit its stride with a record-breaking result.
The event, held on February 3 at the Chop Shop, to raise funds to help those battling cancer, was set up by Cathy Morse in memoriam of her mother who passed away fighting cancer.
This year, it achieved its goal of raising more than $20,000 in a single day hair-cutting blitz.
When the last hair fell, from the likes of Rod Morse and Walter Albrecht, the event raised $20,413.37, its best showing ever.
Cathy was elated by the results, as the pledge sheets for some of the participants whowent all out were in circulation for less than a month.
There were 515 receipt-able donations, plus numerous others who gave out of pocket to support the cause, or just showed up for a haircut.
More support was shown by the likes of Freson IGA and the Drumheller Co-op, which provided fuel in the form of fruit, drinks and sandwiches to keep the scissors blazing.
The money raised by the event will be going to a fund of the Drumheller and Area Health Foundation. This fund is for people undergoing treatment at the Community Cancer Centre. Patients can apply to access the funds for financial assistance or for medical expenses. Chair of the Drumheller Area Health Foundation, Dr. Boris Nahornick, was presented with the funds at the Chop Shop on Thursday, March 4
“100 per cent of the funds stay in Drumheller,” said Cathy.
Although the seventh annual event is almost a year away, brainstorming on who should be on the block for next year has begun.