Musical Ride an honour for one rider | DrumhellerMail 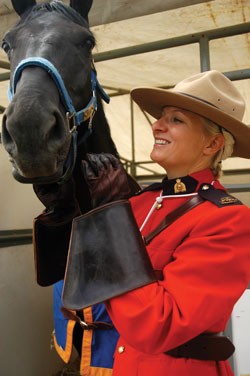 Drumheller was treated to one of Canada’s most prized and iconic national treasures Wednesday when the RCMP Musical Ride made a stop at the Stampede Grounds.

The ride was performed twice on Wednesday, August 11 to more than 2,000 in total. A tradition to the Musical Ride is to honour an outstanding citizen.
At the Drumheller Show, longtime Drumheller businessman John Kohut Sr. was given the honour of signalling the show to begin.
The elegant display of the Mountie red through equestrian riding skill is a full time job for the proud few selected to take the tradition cross-country.
Constable Sandi Farkas, 38, has ridden her horse Venus , 9, since being chosen for the full-time job two years ago.
“It’s a wonderful experience,” said Farkas prior to Wednesday’s 2 p.m. show. “It is one of the few Canadian icons, I’m proud and honoured to be able to ride.”
The Mounties that rode this week are the same that ride across the country. These men, women, and horses train for months for the event.
After a 5 week basic course, about 32 talented riders are weeded out of the nearly 300 that try-out for the prestigious position.
They then spend months practicing intricate maneuvers and cavalry drills such as the turnstile, the charge, and the dome which was featured on old $50 bills.
The black thoroughbred hanoverian horses are selected for their size, colour, and temperament.
The horses are bred in Ottawa for ceremonial purposes, and join the ride at the age of 6. The oldest horse still in the show is Hector, now 21 years of age.
Farkas, now on her last year of three with the ride, says she is lucky to be riding Venus, a gentle horse with a good temperament.
“I’m sure going to miss her,” she says as she gives her horse a kiss on the face. “Even though they are big they are loving animals.”
“Riding on Canada Day in Ottawa,” Farkas reminisces, “was the most amazing feeling.”
“Its a great gig,” to be able to work so closely with the horse and her fellow riders, she says.
On Tuesday night, locals were able to go visit the horses and riders to ask questions. Two shows were held Wednesday, one at 2 p.m. and the other at 7 p.m.
This was the first time the RCMP Musical Ride had graced Drumheller.
“It’s an amazing way to see the country,” Farkas says. “Communities are so welcoming.”
The Musical Ride set off from Quebec in June, and will continue until mid-October when the horses, and riders, get a well earned break before beginning training for next season’s ride in January.
All of the riders are live in Ottawa and are based out of the RCMP headquarters there.
EnCana supported Wednesday’s ride. The ride benfitted Big Country Victims Services and the Drumheller Stampede Ag. Society. 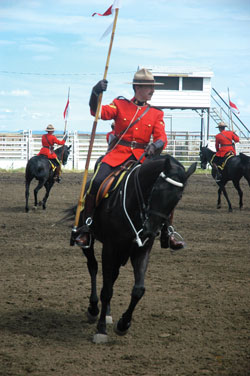 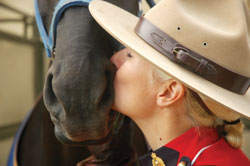 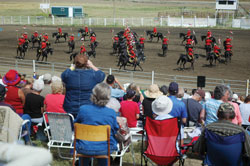 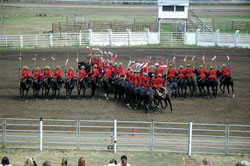