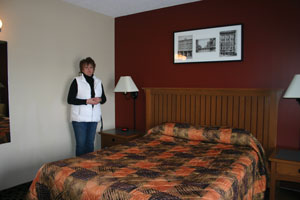 The Canada 2010 Dirtiest Hotels list from TripAdvisor®,  a travellers review site, is out and put Drumheller on the worldwide destination map. The Drumheller Inn came fifth in the top ten dirtiest hotels in Canada. The list is based on TripAdvisor® traveller ratings for cleanliness.
“It might have been the case in the past but not anymore” explains Sewak Gill, the new owner of the hotel when contacted by The Mail. Since he took up ownership of the hotel in July 2009, he started a $500,000 renovation program in October 2009.
The Drumheller Inn’s rating is based on 44 travellers reviews, dated from November  2002 with the last date of stay review of August 2009, feedback included: “Terrible! From the food to the decor. I will NEVER return or recommend this dump.” (date of stay August 2009), “Do not stay here unless everywhere else in Drumheller is full & hell has frozen over” (date of stay August 2009), “OK - convenient to attractions” (date of stay August 2009).
Calgary based, Gill suggested a visit to the hotel where Laura Milton, who looks after the hotel in Gill’s absence, can meet with The Mail to see what has been achieved.
Laura Milton has been working for the Drumheller Inn for 17 years, starting out in the restaurant, then chambermaiding and describes her current job as “there isn’t anything I don’t do.”
Throughout her 17 years there, she has seen several changes of ownership and told The Mail, “I have seen the good, I have seen the bad, and what it looks like now is probably the best it’s looked since it was brand new.”
“They re-did the lobby and the restaurant, it has now opened it up and made it bright, they painted the lounge, the flooring in the banquet room has been re-done, they are re-doing the pool [currently closed], which has leaked for many years on the sidewalk, and are talking about building a new one, we will be putting in a gym in the old formal dining room, we have made a laundry room for the customers, they refurbished the bedrooms, and  have taken everything away, recarpetted the floor and repainted the rooms, there’s only the top floor left to do...there was a problem then, we do not have a problem now.”  Milton also added they are planning on re-painting the outside of the hotel in the spring.
About the TripAdvisor® report, Milton explains she has had many phone calls from different people and feels that people should come and see before they believe what they read.
How has the staff been affected by the report? “We take one day at a time, the girls upstairs [4 chambermaids plus a part time one] get quite upset about it [the report] because they work hard and try hard. I have done a lot of jobs in this hotel, and the hardest one is housekeeping, and those girls deserve a lot of credit for the way it looks today,” says Milton.
She puts in long hours at work and explained, “It’s because I know Mr. Gill is trying to make the changes and it’s the customers that keep you here...I stayed because of the staff and the customers, I love it here.”
“To turn the hotel around has been a lot of hard work…things are definitely turning around for the better, and it is so nice to see because it’s like a load lifted off your shoulders that it is actually starting to become a little better than it has been for a long time. Even the regulars come in and say ‘oh my.'”
Gill told The Mail he is currently looking into updating the Drumheller Inn listing on TripAdvisor® to highlight the changes made to the hotel since renovation started in October 2009.